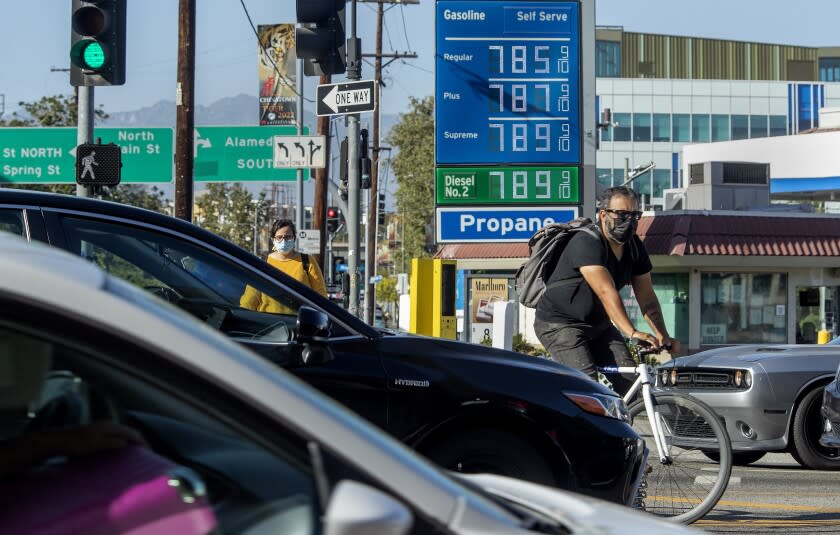 Without realizing they were starting a movement in green energy policy, leaders of a small Sonoma County city seem to have done just that when they questioned the approval process for a new gas station — eventually halting its development and others in the future.

Since Petaluma’s decision, four other cities in the Bay Area have followed suit, and now, leaders in California’s most car-centric metropolis are hoping to bring the climate-conscious policy to Southern California.

It opens a new front in California’s efforts to reduce carbon emissions and already is generating opposition from the fuel industry, which argues consumers would suffer.

“It’s really up to cities to turn around climate change,” said Andy Shrader, director of environmental affairs for Los Angeles City Councilman Paul Koretz, who proposed L.A. work toward its own ban on new gas stations. While the motion hasn’t gained traction, Shrader and other council leaders expect a hearing on the matter this summer.

“L.A.’s enormous and damaging ecological footprint really helped set us on this path,” Shrader said at a recent conference about gas station prohibitions across California. “If you have lung cancer, you stop smoking; if your planet’s on fire, you stop pouring gasoline on it.”

While Petaluma officials at the time called its new gas pump ban “completely uncontroversial,” it’s unclear how such a policy would go over in Los Angeles, a city with about 65 times as many people and a transportation infrastructure that still heavily relies on vehicles. Lobbyists for gas stations said they will oppose the motion in L.A. if it moves forward.

But Koretz said such a ban would better prepare the city for a future that doesn’t rely on fossil fuel-powered vehicles, which California has pledged to stop selling by 2035.

“Given Gov. Newsom’s timeline to end the sale of gas vehicles by 2035, gas stations are a dying business,” Koretz said. “Their toxic chemicals take years and millions of dollars to clean up.”

According to the Environmental Protection Agency, about half of the nation’s 450,000 brownfields — sites containing hazardous substances, pollutants or contaminants — is property compromised by the presence or potential presence of petroleum, much of it leaking from old gas stations. 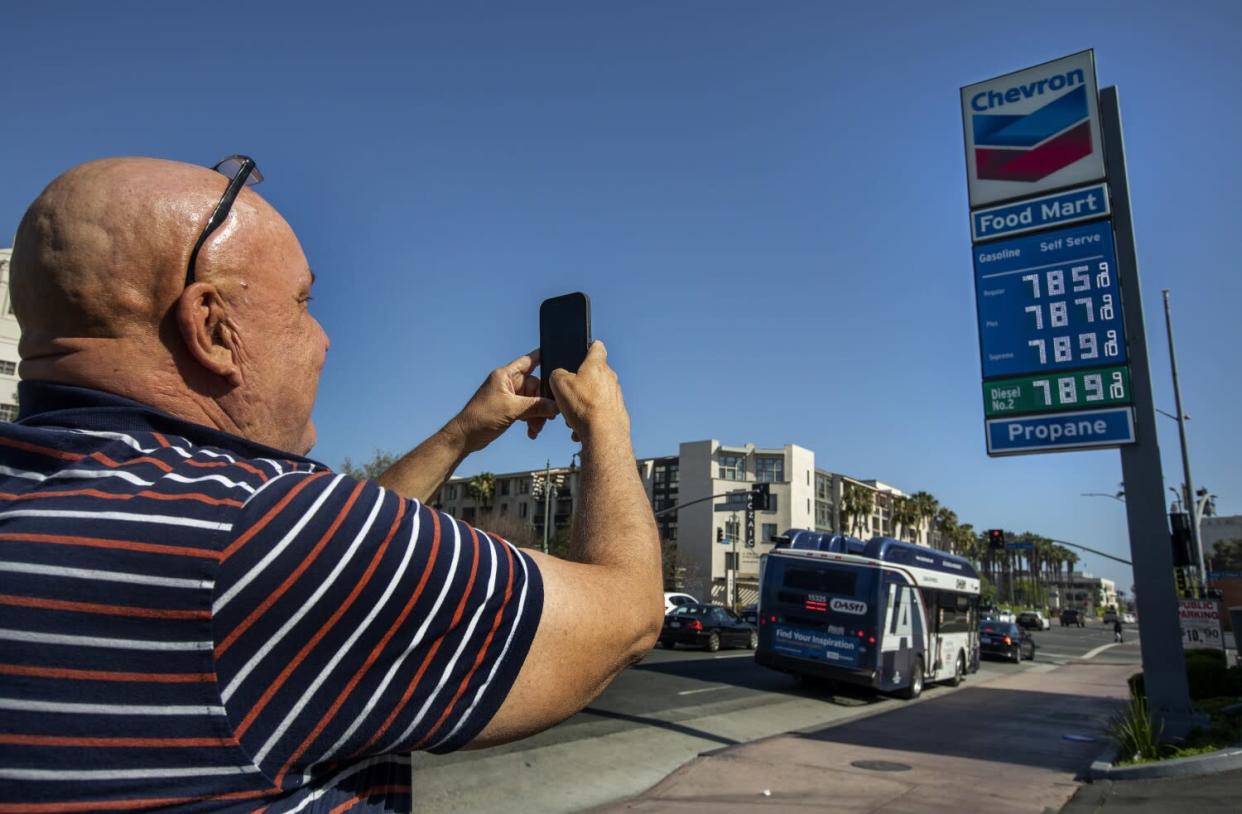 Koretz’s proposal — which calls on the city to continue “leading the way to reduce greenhouse gas emissions and air pollution” — would task city officials to draft an ordinance to prohibit any new fossil-fuel pumps in the city and require that “any expansions of current gas stations to be limited to serving zero-emissions vehicles and providing non-fuel-related facilities.”

It would not affect any stations’ current operations.

“Taking the commonsense step of halting new stations and helping existing stations transform their business models ensures we are protecting our small-business owners and making sure the city doesn’t end up footing the bill to clean up a bunch of toxic stranded assets in the relatively near future,” Koretz said.

For some, like Karen Huh, who said she sees four gas stations at some intersections near her South L.A. home, the idea makes sense.

“I think we have enough, to be honest — more than enough,” the 28-year-old said while filling her tank on South Vermont Avenue. She also said, given current gas prices, she’s been researching buying an electric or hybrid car once she pays off her SUV in the next few months.

Troy Walker, 49, said he also would like to switch to an electric car, but their skyrocketing prices have put the idea on the back burner. Still, he said he’d have no qualms about the city banning new gas stations, especially given what he knows about climate change — which he learned about during a sustainability course.

“If people were more educated, they would be more aware and would oppose the new gas stations,” Walker said, filing up his tank at a recently opened 7-Eleven on West Century Boulevard, one of the few new stations permitted by L.A. in recent years.

From 2016 to summer 2021, Los Angeles approved permits for only one or two new gas stations a year, except in 2017, when three were approved, according to data provided to The Times by Koretz’s office. It wasn’t immediately clear whether any were permitted in the last year, as the city’s Department of Building and Safety did not immediately fulfill a records request for additional information.

“I’m concerned about the ozone layer for the future of my kids,” Walker said. “It’s definitely going to affect the younger generation.”

Brian Mullins, though, said he’d rather local officials focus on ramping up electric power infrastructure than halting new gas stations. He pointed out the pumps have a limited lifespan, which means they eventually need to be replaced.

“How long before you don’t have enough gas stations?” Mullins, 62, asked, while filling up at a station in Westchester.

Koretz’s motion, which was seconded by Councilman Kevin de León, was introduced in May 2021 but tabled by the city’s Planning and Land Use Management Committee in September without much discussion. City leaders now say they expect a full hearing in August.

Five neighborhood councils — Westside, Silver Lake, Los Feliz, Echo Park and North Westwood — submitted statements in support of the motion, at least three of which voted unanimously to support the proposal, city records show. Only one person addressed the idea during public comments in September, questioning why the city wouldn’t “lead by example and convert the entire city’s fleet to nonfossil fuel-burning before [officials] make life more difficult for everyone else in the city?”

At least one other nearby city — West Hollywood — is also considering restricting new gas stations. Its city council approved a directive in April 2021 for officials to evaluate the plan before developing a law. West Hollywood spokesperson Sheri Lunn said the proposal is set for subcommittee review, and if approvals continue, it could see a full council vote by the end of the year.

Los Angeles County had just over 2,000 gas stations in 2020, according to data from the California Energy Commission. The commission does not track city-level data.

In 2020, about 2,750 million gallons of gasoline were sold in L.A. County, according to commission data — about three times that of any other county in California. In 2019, before the pandemic affected travel and commutes, L.A. County gas sales totaled 3,600 million gallons, state data show. 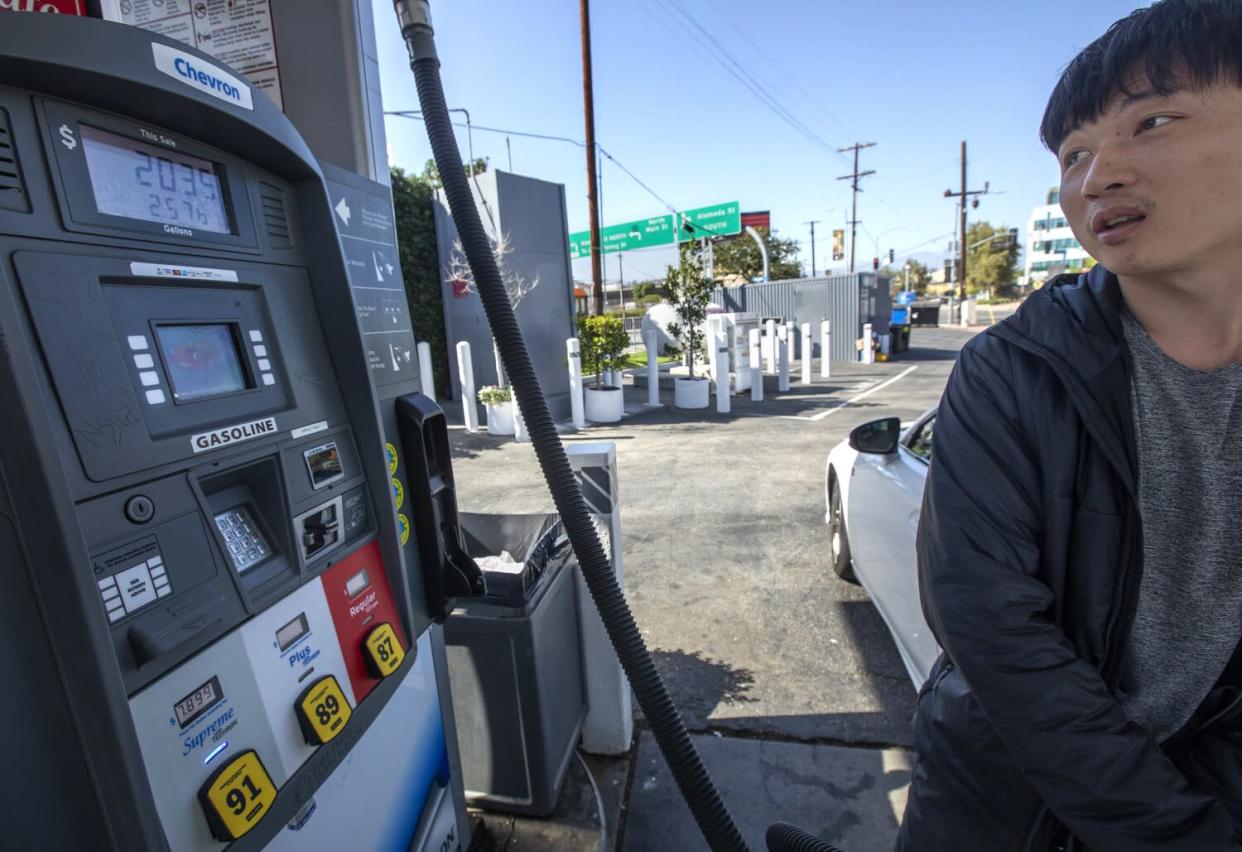 As more cities consider the bans, the California Fuels & ConvenienceAlliance, which lobbies for gas station owners, will continue opposing the proposals, said Sam Bayless, the alliance’s policy director. He mainly worries about how market limits could further increase gas prices and how an outright ban could affect a city’s development.

“Not being able to serve the people who live there, who are commuting to work, picking up their kids from soccer practice … is really a disservice to the people who are new to the area,” Bayless said.

While he called the future of gas stations a complicated issue given the climate crisis, he said they are still an “essential service,” as electric and other energy sources haven’t filled the gap, especially for low- and middle-income Californians.

But opposition hasn’t affected the movement’s success for leaders in Rohnert Park and Sebastopol, both small cities in Sonoma County that passed new gas station bans, as well as neighboring cities American Canyon and Calistoga. Officials in other California cities, as well as in New York and British Columbia, have said they are developing similar legislation, motivated to limit reliance on fossil-fuel infrastructure.

“We cannot even think twice about the banning of the gas station,” Rohnert Park Mayor Jackie Elward said. “Why would we want more fossil fuel pollutions with costly cleanup of more gas stations when we have enough, and California won’t even have gas cars for sale by 2035?” 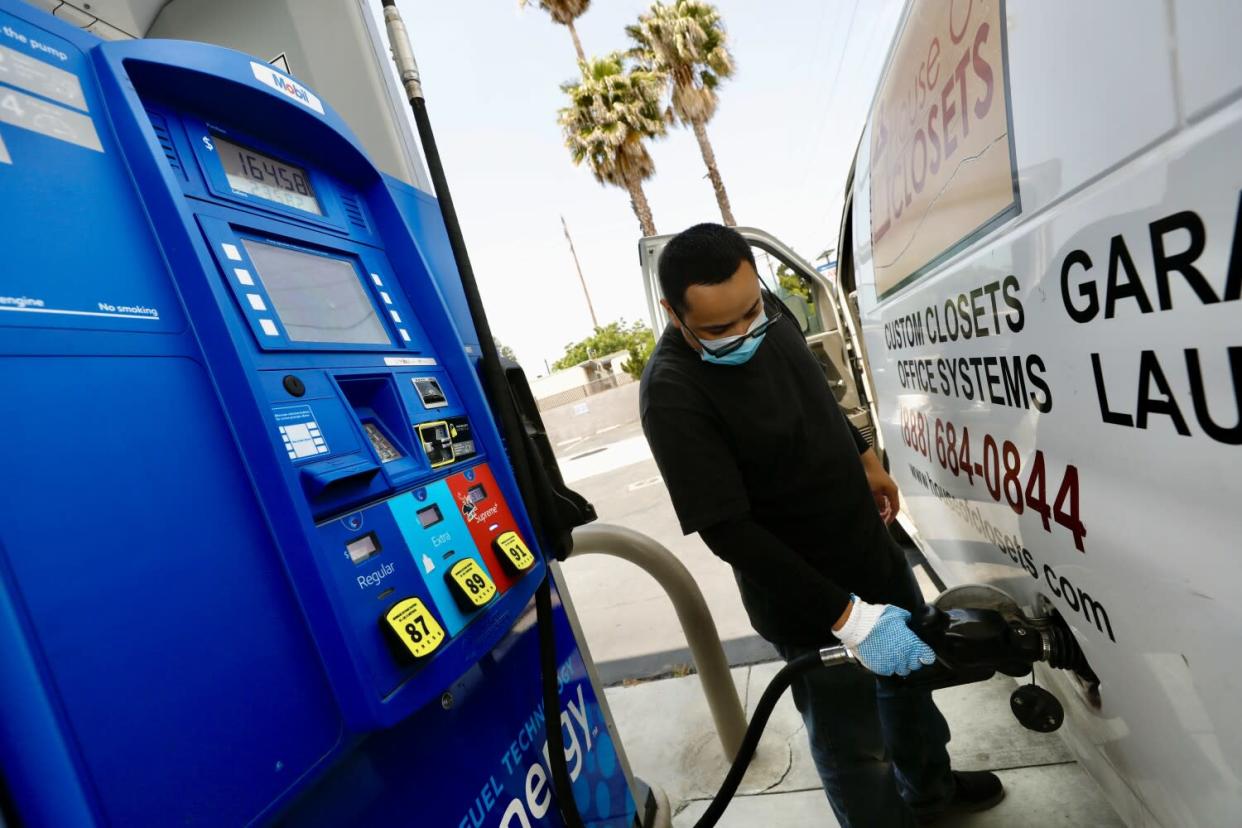 But Kevin Slagle, a spokesperson for Western States Petroleum Assn., which lobbies on behalf of oil and gas companies, said he worries how bans can have “unintended consequences.”

Bans will just make it harder for consumers to find fuel, Slagle said. “Taking what we’re facing today — a lot of demand and not a lot of supply — if you start taking stations out, new and existing, if you make a commodity tougher to find, that often means higher costs,” he said.

“Los Angeles is completely saturated with gas stations already, and a few more or less stations won’t make any difference in overall price,” he said.

Leaders with Stand.earth, an environmental advocacy group pushing the gas station bans, argue that air and soil pollution — which disproportionately affect low-income communities of color — as well as the difficult process to clean up abandoned pumps should be reason enough to prohibit new stations.

“The real question now that’s coming up as we ban new gas stations: What do we do with our old gas station sites?” said Fischer, the Petaluma councilmember. “Because they’re going to take a lot to clean up. … That’s the next wave of this: thinking about what’s to come.”

For the record:
5:00 p.m. July 11, 2022: A previous version of this story referred to Petaluma, Rohnert Park and Sebastopol as Sonoma Valley cities. They are in Sonoma County but not in the Sonoma Valley.