California’s ‘house of horrors’ parents are ordered to stand trial after court hears shocking details of torture, abuse and starvation endured by their caged children

A California judge today ordered a couple to face trial on torture and child abuse charges after prosecutors presented evidence their children were subjected to years of filth, starvation and cruelty that included beatings with a wooden paddle and caging them as punishment.

The judge threw out a child endangerment charge involving the youngest daughter, who was two years old when the children were rescued from their home in Perris in January.

As the Turpin parents appeared for a second day at a preliminary hearing, their seven adult children were in an adjacent courthouse for a closed-door guardianship proceeding. 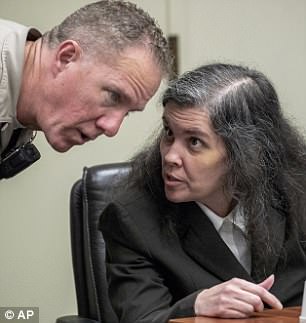 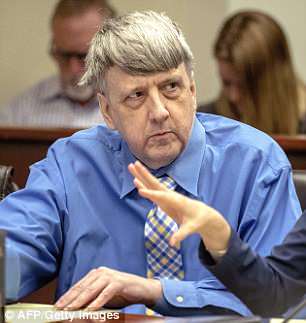 David and Louise Turpin (pictured in court Wednesday) are accused of caging, beating, torturing and starving their 13 children, some of whom were severely underweight 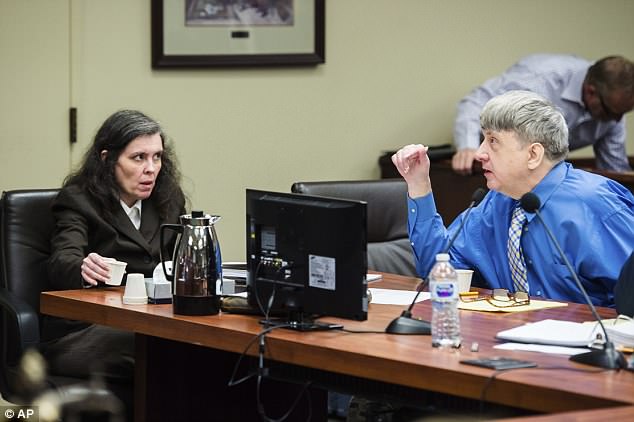 House of horrors parents: The Turpins  attended a preliminary hearing Wednesday to determine whether prosecutors have gathered enough evidence to take their case to trial

Jack Osborn, a lawyer for the adult children, said no decision was reached on appointing the Riverside County as their long-term guardian. Bailiffs cleared the hallway after the appearance for the privacy of the children who could be seen from a distance in silhouette as they were ushered out of view.

Disturbing details emerged during Wednesday’s preliminary hearing in the Turpin case, including how the victims were fed moldy pies, whipped with belts and choked for watching a Justin Bieber music video.

Those present in Superior Court in Riverside gasped when prosecutors showed photos of two of Louise and David Turpin’s daughters that their 17-year-old sister had snapped with an old cellphone before fleeing in January.

David and Louise have pleaded not guilty to torture, child abuse and other charges. Each is being held on $12million bail and could face up to life in prison if convicted.

The couple was arrested in January after their 17-year-old daughter, who had spent two years planning an escape, climbed out a window and then called 911 to report abuse.

By the time police arrived at the house 70 miles southeast of Los Angeles, the two shackled sisters had been hastily released from their chains when police showed up, but a 22-year-old son remained restrained.

The young man said he and his siblings had been suspected of stealing food and being disrespectful, Riverside County sheriff’s Det. Thomas Salisbury said during Wednesday’s hearing.

The man said he had been tied up with ropes at first but later, after learning to wriggle free, restrained with increasingly larger chains on and off over six years.

Sheriff’s deputy Daniel Brown said one daughter told him that she knew her sister had contacted police when she heard a knock at the door and saw flashing lights outside the window.

‘She said she was finally going to become free,’ Brown said.

Senior investigators with the county district attorney’s office testified that doctors and medical records showed some of the children were severely malnourished and had muscle wasting, with some adult children being 32lbs underweight. 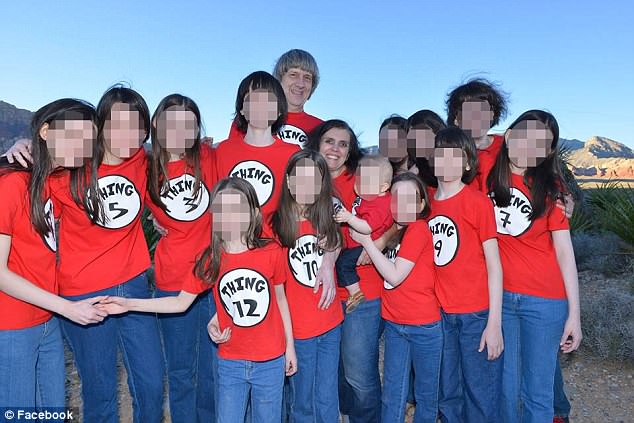 Investigators testified that one of the Turpins’ daughters (pictured), aged 11, had the arms the size of an infant

The 11-year-old girl who had been shackled to her bed had stunted growth from malnourishment and her arms were the size of an infant’s, investigator Patrick Morris said.

In her 20-minute 911 call, the 17-year-old who escaped told the dispatcher: ‘We don’t really do school. I haven’t finished first grade.’

The girl told sheriff’s Deputy Manuel Campos that she hadn’t bathed in a year and that she didn’t know the date or the month, he testified.

About two years ago, the mother found out the girl had been watching a Justin Bieber video on a cellphone borrowed from her sister, and started choking her and asked, ‘do you want to die?’ Campos said.

The girl said she didn’t want to die, but she feared she was about to as the choking continued.

There was no breakfast, and recently lunch and dinner had been combined into one meal that included peanut butter and bologna sandwiches, a frozen burrito and chips.

The girl said she recently had started refusing the peanut butter sandwiches ‘because she starts to gag and starts to throw up,’ Campos testified.

The teen, who said she hadn’t finished first grade, had difficulty pronouncing some words and spoke like a much younger child.

The girl planned her escape for two years and was terrified as she climbed out a window to freedom, according to Campos’ testimony.

‘She couldn’t even dial 911 because she was so scared that she was shaking,’ he said.

She didn’t know the neighborhood and had to read her address to the dispatcher off a piece of paper. The kids were rarely allowed outside, though they went out on Halloween and traveled as a family to Disneyland and Las Vegas, they said.

‘Sometimes I wake up and I can’t breathe because of how dirty the house is,’ the girl told the woman dispatcher.

She said she hadn’t bathed in a year and Campos observed dirt caked on her skin and a stink from being unbathed. 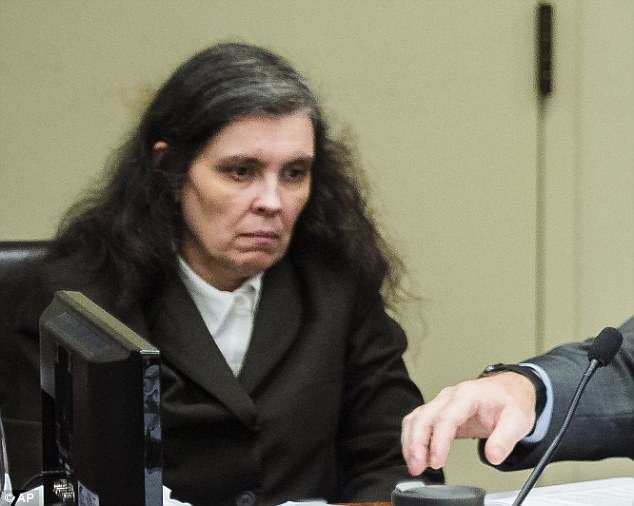 Louise was seen wiping her eyes (not pictured) while listening to a 911 call her 17-year-old daughter made after escaping their Perris, California, home in January 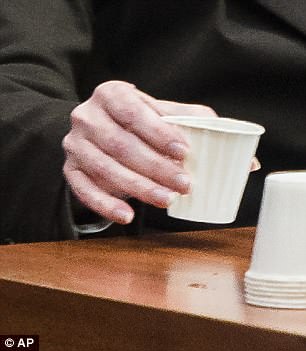 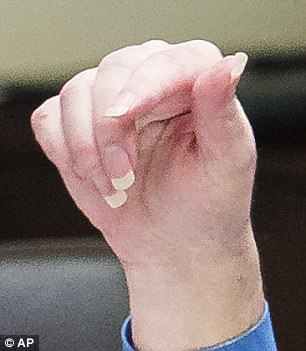 Claws: Both the husband and wife appeared in court on Wednesday with exceedingly long fingernails (left and right) 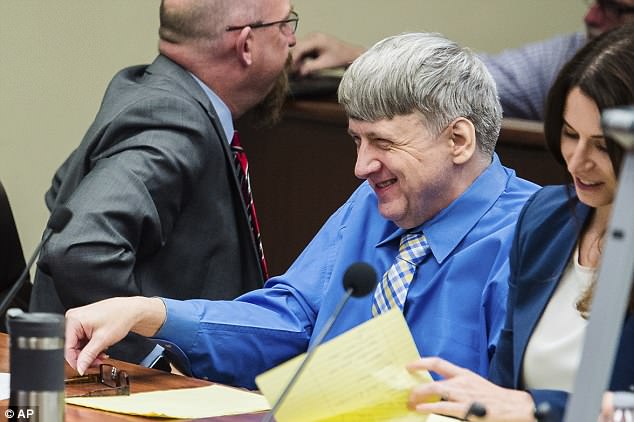 What’s so funny? David Turpin had a smile on his face during the hearing in Riverside. He has gotten a shorter haircut behind bars 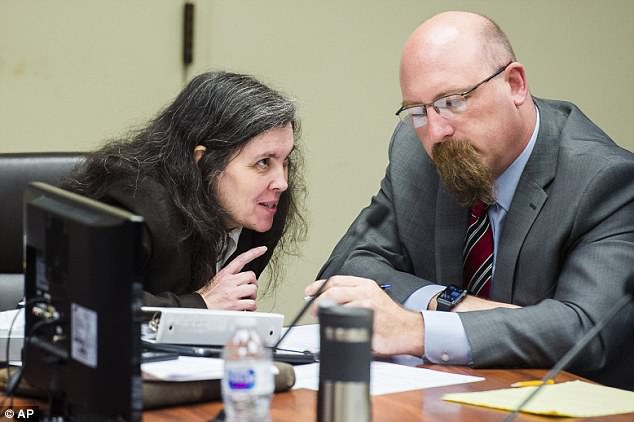 Despite wiping tears during part of the hearing, she seemed to smile talking to her attorney at other times

The girl referred to her parents as ‘mother’ and ‘father’ because she said it was ‘more like the Bible days,’ he said.

She reported that her father pulled down her pants and put her on his clothed lap in a recliner chair in the TV room when she was 12. She said she didn’t like it and pulled up her pants, and that he told her not tell anyone, Campos said.

The children spent most of their time locked in their rooms except for limited meals or using the bathroom.

If they didn’t obey strict rules, they were slapped in the face or had their hair pulled, the girl told Campos

The eldest son in the family told authorities discipline in the home included beatings with the leather or buckle end of a belt, said Wade Walsvick, senior investigator for the Riverside County district attorney’s office.

Years earlier, when the family lived in Texas, he said the beatings involved ‘a switch, the paddle and the oar’ and the siblings were sometimes placed in cages.

Wednesday’s hearing was held to determine whether the prosecutors have amassed enough evidence to take the case against the Turpins to trial.

Authorities said the Turpin children were isolated from each other and locked in different rooms in small groups. They did not have access to televisions or radios but expressed themselves in the hundreds of journals that investigators seized from the home. 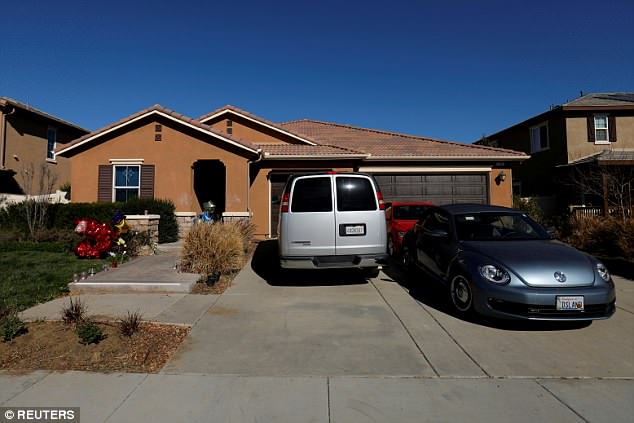 Authorities said the Turpin home in Perris (pictured) reeked of human waste, and the evidence of their children’s starvation was obvious

Most of the children were homeschooled, but one of the older boys was allowed to attend classes at Mt San Jacinto Community College.

His mother would drive him there, stay outside in the hallway during the class and then take him back home as soon as the class ended, prosecutors said.

After they were freed from the home, the children, who ranged in age from 2 to 29, were immediately hospitalized and eventually released. Prosecutors said the abuse was so prolonged the children’s growth was stunted.

The current whereabouts of the children is unknown. A spokeswoman for the county’s social services department declined to discuss the case.

Jack Osborn, an attorney appointed to represent the couple’s seven adult children, said earlier this year they were ‘doing well.’ 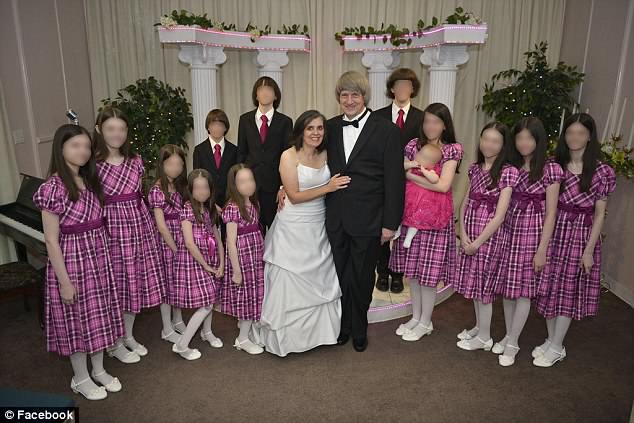 After they were freed from the home, the children, who ranged in age from 2 to 29 (pictured at their parents’ vow renewal ceremony), were immediately hospitalized

They have participated in music therapy programs, made crafts and world-famous cellist Yo-Yo Ma held a special concert for them. They communicated with their younger siblings over Skype.

‘They’re happy, they are wanting to move forward, they do not want to dwell on the past and they want their identity to be now and going forward the things they hope to do, the dreams they have. They do not want people to think of them only as a possible victim, but as young adults setting off on their lives,’ he told the Riverside Press-Enterprise newspaper in February.

The hearing is scheduled to resume Thursday.