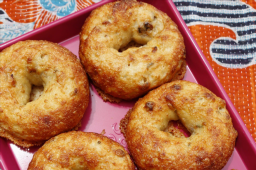 A bagel chain beloved in Washington, D.C, and Maryland plans to expand from its East Coast roots, with two outposts set for the Mile High City.

Call Your Mother Deli, a bagel shop and deli, will open the stores next spring at 1291 N. Pearl St. in Capitol Hill and 3870 Tennyson St. around Berkeley, D.C.-area magazine Washingtonian reported.

Owners Daniela Moreira and Andrew Dana currently run seven stores — five in the nation’s capital and two in neighboring Maryland, with the first opened in 2018 in D.C.’s Park View neighborhood.

Denver “felt like home. We love the architecture. We love the neighborhoods. It has these great different pockets. It feels a lot like D.C.,” Dana told the Washingtonian. “We had that a-ha moment; that warm, fuzzy feeling in the belly.”

Call Your Mother is dubbed a “Jew-ish” deli. Both Dana and Jeff Zients, partner and investor, are Jewish.

The chain, which is wildly popular in D.C., earned a national spot on Eater’s list of “The 16 Best New Restaurants in America” in 2019. It’ll boost the Mile High City’s bagel game, in which Moe’s Broadway Bagels, Rosenberg’s Bagels and Leroy’s Bagels are all players.

The team behind Call Your Mother is tied to several sister restaurants in Washington, D.C, and Virginia: Timber Pizza, Turu’s Pizza, Mercy Me and Ballston Service Station. They didn’t immediately respond to a request for comment.