Witnesses have told how they saw a group of teens fleeing minutes before police swooped on a housing estate in Camberwell yesterday and arrested six male suspects. 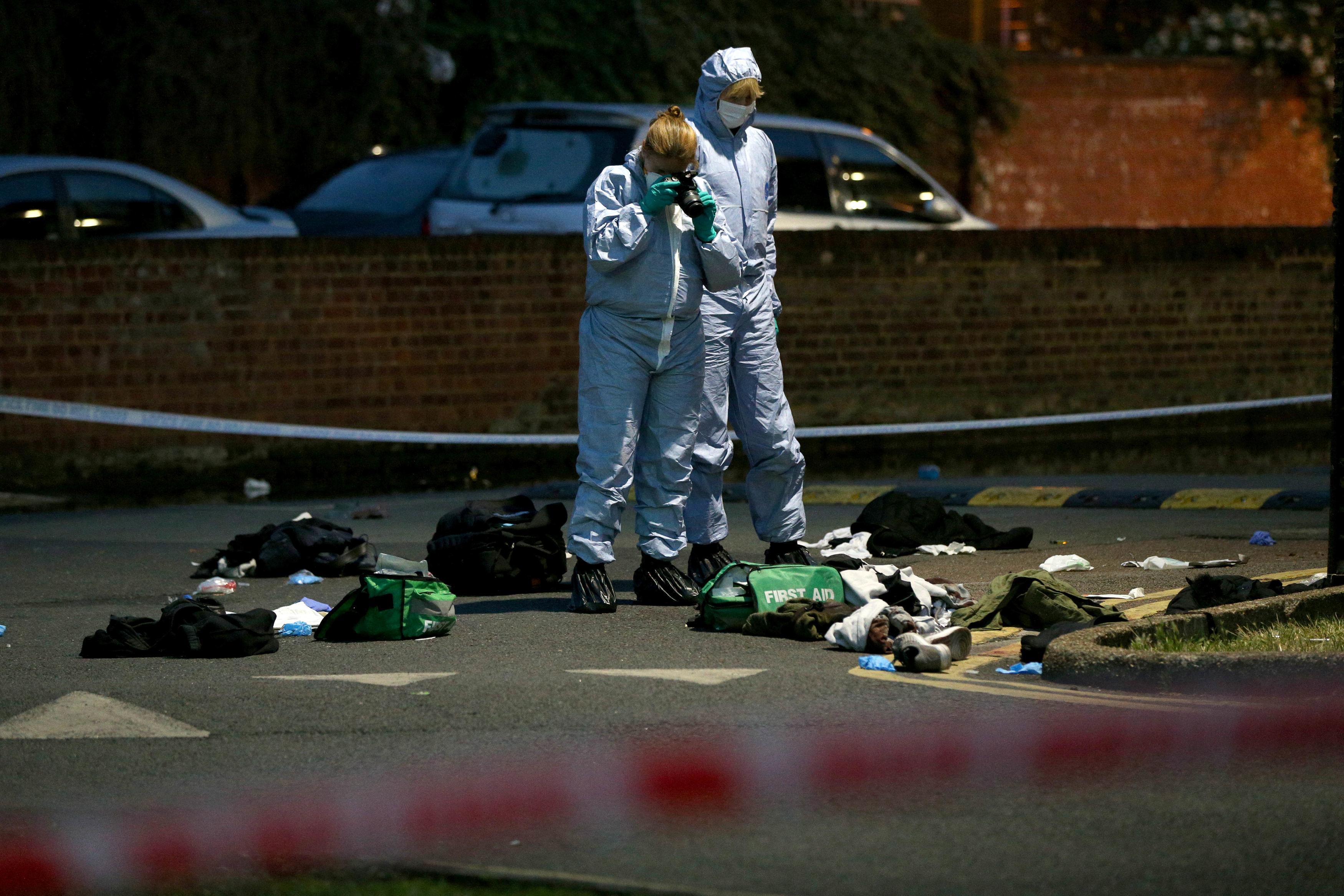 The injured boys were rushed to hospital, where two are undergoing emergency treatment for their wounds.

All four boys are understood to be around 15 years old.

Pointing to the crime scene outside Landor House on Elmington Estate, one witness said: "Ten minutes before the stabbing I saw a whole heap of youths run down that way.

"Then 10 minutes later I heard people shouting and bawling out the back there. 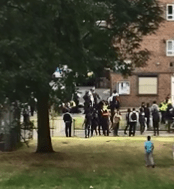 "When I looked round the back there, I saw the youth come running from the block.

"He came to the corner and dropped. He was holding his belly and all of his intestines were falling on the ground."

Another resident who filmed the aftermath heard screams and saw victims collapsed in the street at around 5.30pm.

He said: “I was sitting in my front room and I heard a loud scream, I went out there to see what happened, there was a mass of people out there. 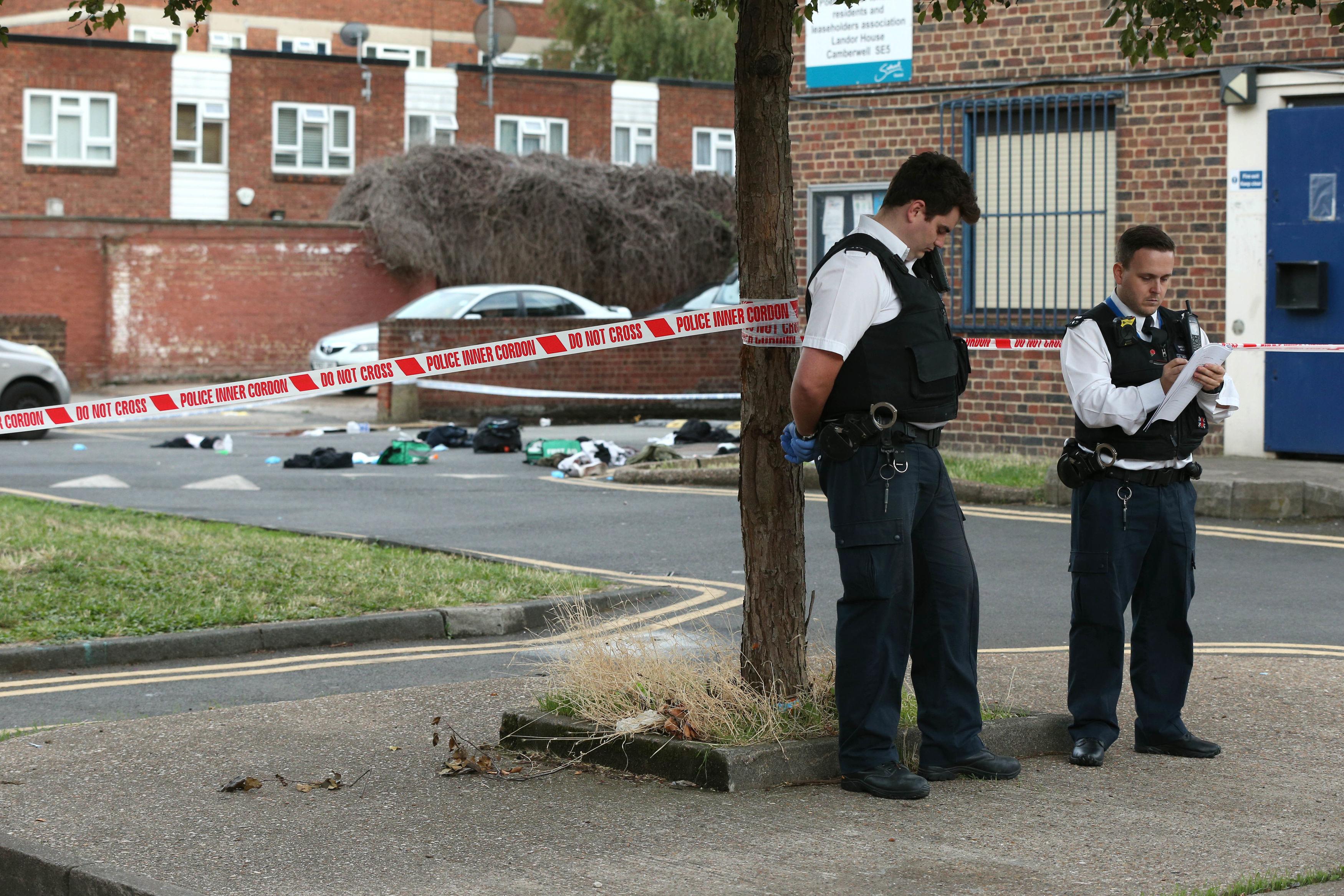 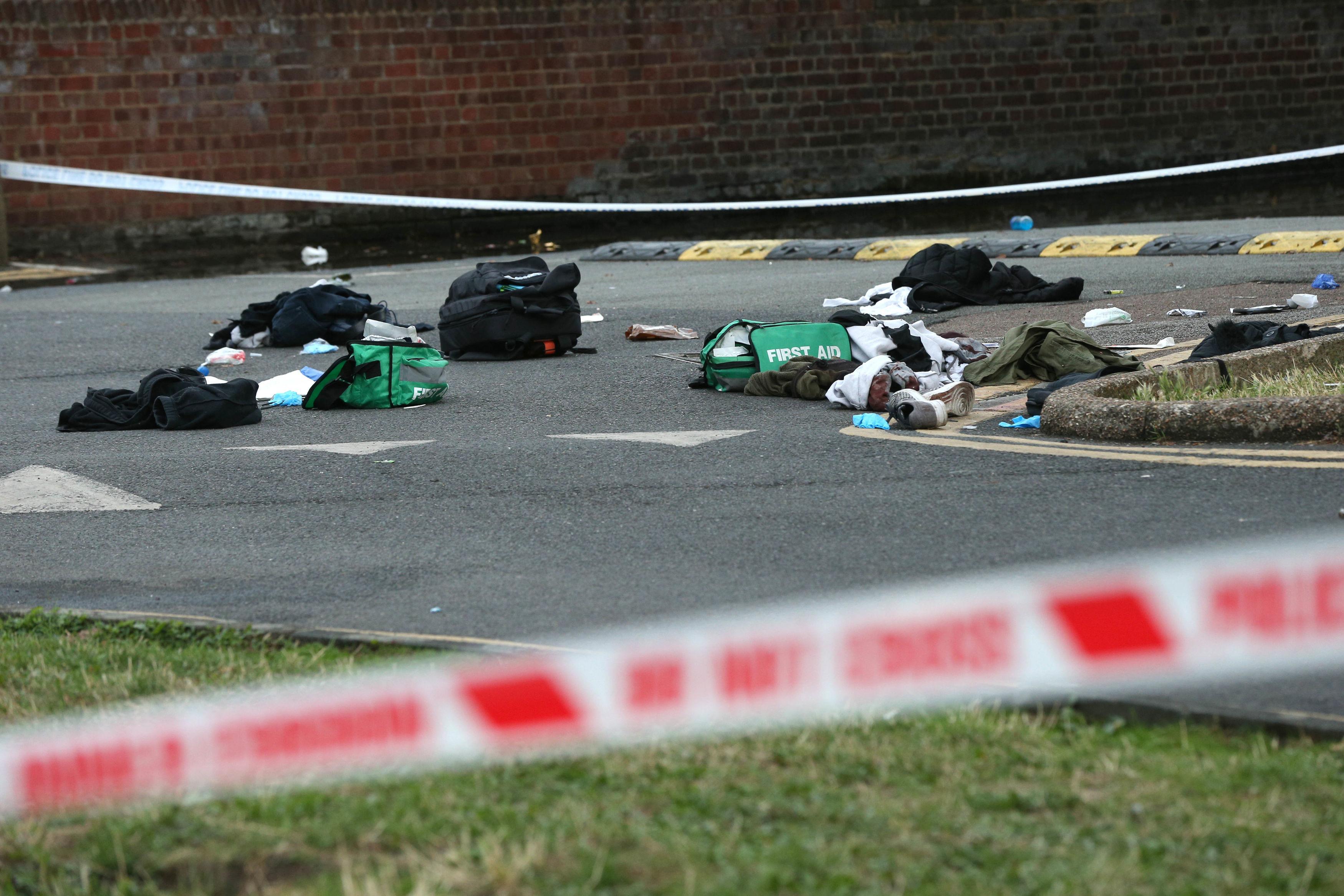 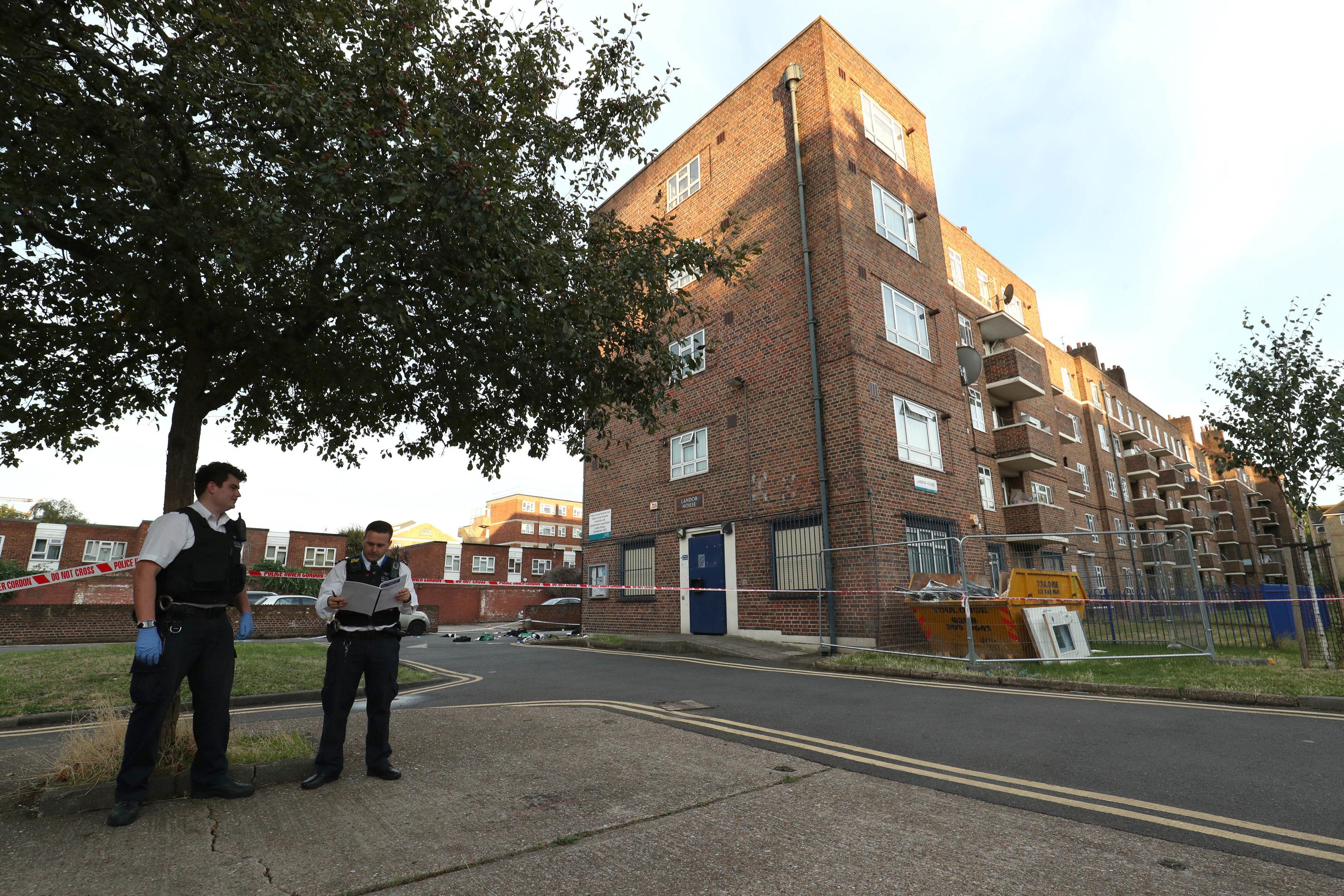 “The scream was very, very loud, we heard it right through the flat.

“I could see injured teenagers on the floor, one of them had taken off his T-shirt – I think to put pressure on his wound."

Dramatic footage of the crime scene – littered with bloodied clothing, trainers and medical equipment – was taken just half a mile from where drill rapper Incognito was stabbed to death on nearby Warham Street a fortnight ago.

The death followed that of his friend Rhyhiem Ainsworth Barton, 18, a fellow drill rapper who was fatally shot on the same street in May. 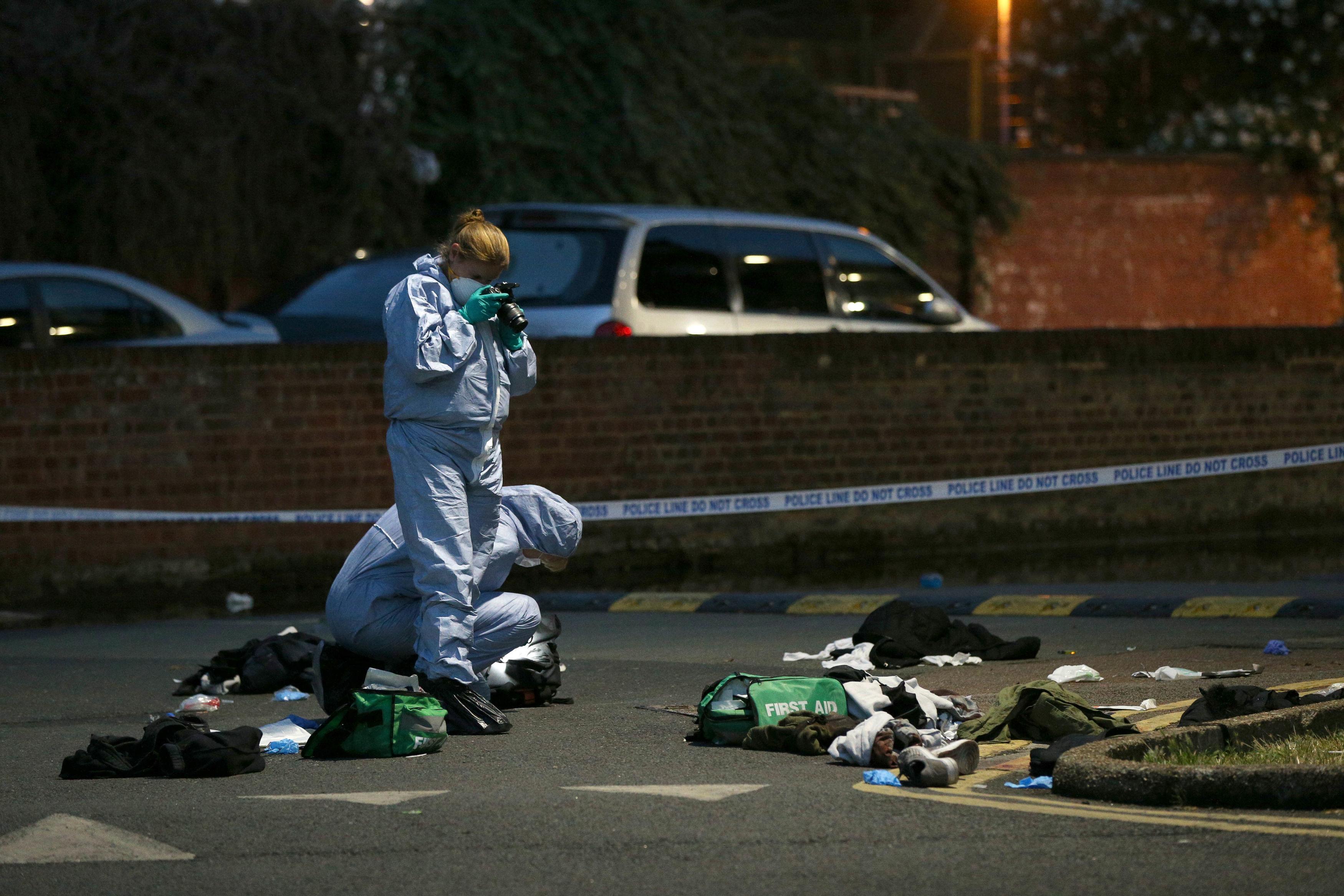 Another drill rapper, Latwaan Griffiths, 18, was knifed to death and his body dumped in the middle of the road last month.

Katerina Makunova, 17, was also fatally stabbed in Camberwell in July amid a surge in knife crime in the capital.

Superintendent Annmarie Cowley, of Southwark police, described the "utter senselessness" of the crime.

“This incident is in its very early stages and at present we cannot speculate on what the nature of it may be," she said. 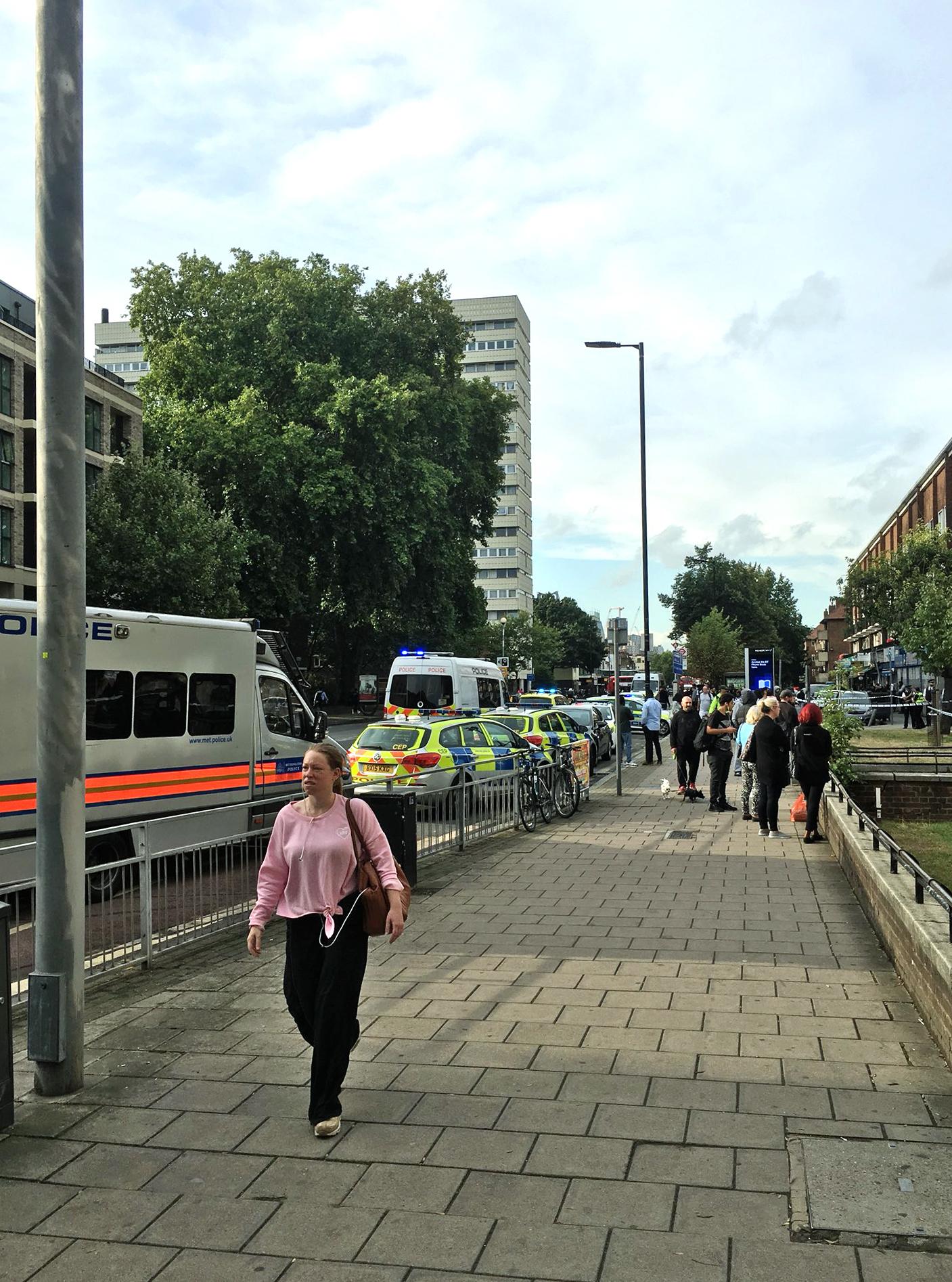 “What we can say for certain is if there needed to be an example of the utter senselessness of knife crime, then this is it; four males are in hospital, and at this stage we cannot say how serious their injuries are. It is beyond comprehension.

“I would like to offer my reassurance to the community that officers are responding robustly.

"We remain at the scene and have also requested additional resources from the Territorial Support Group and Violent Crime Taskforce to patrol the area."

Police have authorised Section 60 search powers in light of the stabbings, which are in place until Friday morning.