Prisoners are mostly supporters of the Cambodia National Rescue Party, which was forcibly dissolved in 2017. 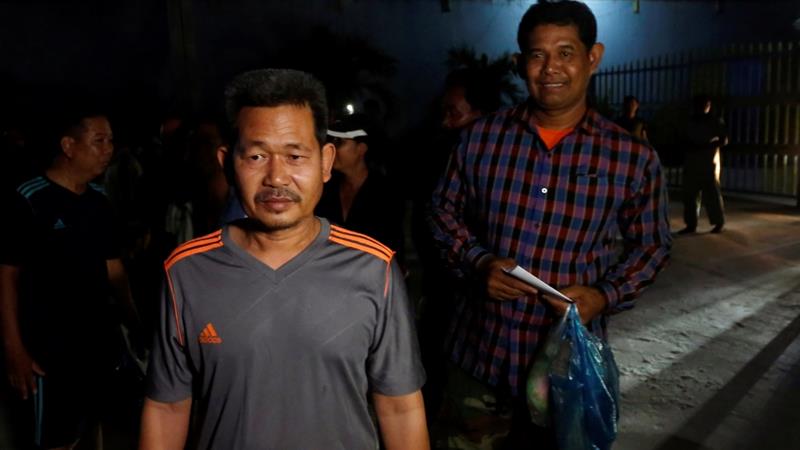 Phnom Penh, Cambodia – The first of 70 political prisoners ordered to be freed by Cambodian Prime Minister Hun Sen have begun leaving jail, in a relaxing of tensions after leaders of the opposition party failed to return to the country to lead protests as promised a week ago.

“There are over 70 people, please hurry up work on this case so that these brothers can be released on bail,” Hun Sen said in a speech inaugurating a cement factory in Kampot on Thursday.

The prisoners are mostly members of the forcibly dissolved Cambodia National Rescue Party (CNRP) who were arrested for supporting the return of party founder Sam Rainsy – which Hun Sen had labelled a coup attempt. Rainsy, party Vice President Mu Sochua, and others planned to return to Cambodia by land via the Thai border but were denied entry to Thailand earlier this month.

Prisoners began trickling out almost immediately after Hun Sen’s order. Mom Sambo, a CNRP supporter in Kampot, was jailed on October 14 and spent a month behind bars before being released on bail on Thursday. She told Al Jazeera, she still feels she is not free.

“We’re under monitoring from the court, we can’t leave the country, and the biggest problem is we’re not allowed to have any gathering,” Sambo said, calling for the court to drop all charges against her and other CNRP supporters.

Sambo said prison conditions were bad, but she had been treated well.

“They like me and respect me and the other political prisoners. All of them, the prisoners and guards, they respect me as they know I did not commit anything wrong,” she said.

The releases coincide with a report from the European Union on the status of Cambodia’s Everything But Arms trade deal. Under the scheme, Cambodia can export any goods other than weapons to the EU tariff and duty-free, but the agreement carries human rights requirements.

In February, the EU began the process of withdrawing the EBA, mostly due to violations of political rights, as well as land rights and labour rights.

Earlier this week, the EU said it had sent the report to the Cambodian government, although it did not publish the document.

According to Radio Free Asia, which obtained a copy of the report, it is extremely critical of the government. “[T]he improvements made so far overall, on the violations identified at the launch of the procedure taken together, are insufficient to change the overall assessment,” RFA quoted the report as saying.

Cambodia’s political crisis began when the CNRP was dissolved in 2017 following a strong showing in that year’s local commune elections, paving the way for Hun Sen to claim all 125 seats in Parliament during the 2018 national election.

Party President Kem Sokha was arrested for treason and only released from house arrest on bail earlier this week.

The investigation against Sokha was also closed on Friday meaning after two years the case will finally go to trial or be dropped. In the meantime, he is still prohibited from leaving the country or engaging in political activities. He has however hosted a parade of foreign diplomats, as ambassadors from the US, EU, Japan, France, and more paid him visits this week.

Meanwhile, Sochua and Rainsy have toured Asia looking for a way to get back home. Rainsy on Saturday announced his arrival in Paris, where he has lived in self-imposed exile since 2015.

Even though Sambo was arrested for supporting Rainsy’s return, she said she did not blame him for what had happened to her, especially after he failed to arrive.

“It’s normal work when involved in politics – sometimes hot, sometimes cold, but he’s committed to doing better in order to give benefit to the people, to our nation,” she said.

A message to EU?

Astrid Noren-Nilsson, a political scientist who specialises in Cambodia and is based at Sweden’s Lund University, said the new developments were probably inspired by the EBA report.

“The timing of the order, coming merely two days after the EU report presenting the preliminary findings of the EBA investigation was sent to the Cambodian government, suggests that the releases may be in response to the findings and recommendations of that report,” she said.

Sochua has no doubts. The recent releases were “definitely” a response to the EBA, she told Al Jazeera, and did not mean there has been a substantive change.

“In the long run, it’s not going to solve the fundamental problem of politics in Cambodia or the situation of democracy,” Sochua said, adding that Cambodia’s institutions were under the control of Hun Sen who would never willingly allow free and fair elections if he feared he might lose.

Hun Sen has frequently claimed the political crackdown was necessary to preserve “peace and stability” in Cambodia. In 2018, he wrote an open letter praising the government for stopping “the trick of colour revolution of the opposition that colluded with foreigners attempting to overthrow the legitimate government”.

Noren-Nilsson said that the arrest of Sokha and dissolution of CNRP specifically “triggered” the withdrawal of the EBA. “The EU assessment is focusing on concessions aimed at restoring the pre-2017 situation, rather than institutional reform,” she said.

But Phil Robertson, deputy director of Human Rights Watch’s Asia division, said institutional reform should be a requirement. Robertson specifically mentioned the 2017 Law on Political Parties, which gave the government the ability to dissolve parties in the first place, and could be invoked again any time an opposition party poses a significant threat to Hun Sen.

“PM Hun Sen is the unchallenged head of a single party, rights-abusing dictatorship. Everyone answers to him, from the commune official to the top police and military officers, and of course, the lackey courts that lack any sort of independence,” he said in a statement to Al Jazeera. “The only way to start to move Cambodia back towards the truly multiparty democracy envisioned by the Paris Peace Accords is for the EU to stand strong, and maximize its leverage to achieve substance rights and governance reforms that can’t just be rolled back when Hun Sen feels like it.”

Sun Thun was waiting outside the Kampong Thom provincial prison for his brother to be released when he spoke to Al Jazeera on Thursday. 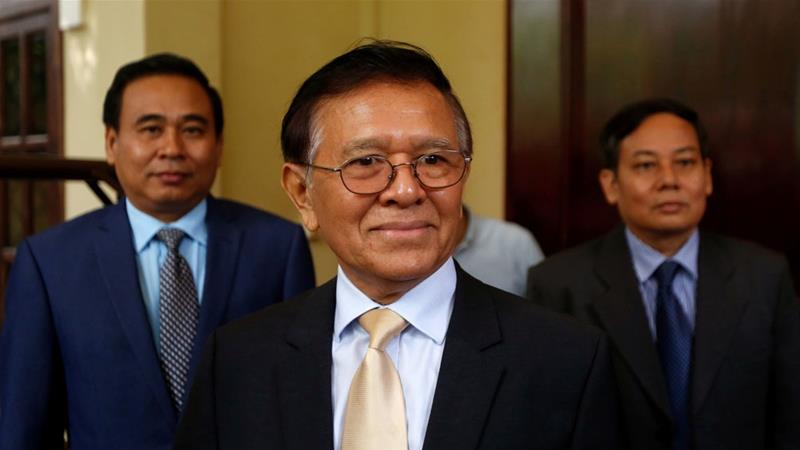