Cambodia will ban all elephant rides at the country’s famed Angkor temple park by early next year, an official said today.

The Angkor archaeological complex in northern Siem Reap attracts the bulk of the kingdom’s foreign tourists – which reached six million last year – and many opt for elephants rides around the ancient temples.

But in a rare win for conservationists who have long decried the popular practice as cruel, these rides ‘will end by the start of 2020’.

Apsara Authority, the government agency that oversees the Angkor archaeological site, said it is important for the animals to be able to live in their natural habitat, and there are other ways to provide attractions and rides for tourists.

Some of the 14 elephants officially at the site under the management of a private company are old and in ill health.

They have been providing rides for tourists since 2001 and would be trained to put on performances for visitors. 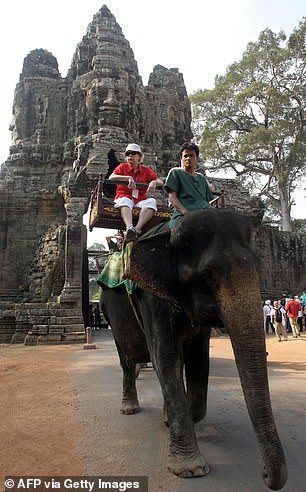 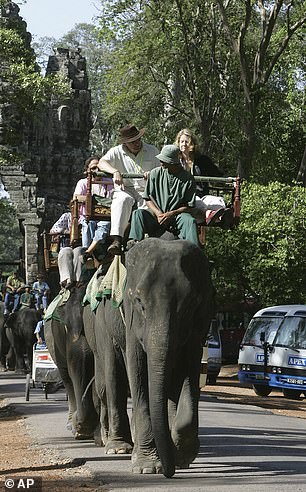 Tourists riding on an elephant during a visit to Cambodia’s famed Angkor Wat temple in Siem Reap province (left and right in images from 2007). These rides will end by 2020, officials said today, and the animals will be rehomed to a suitable jungle area 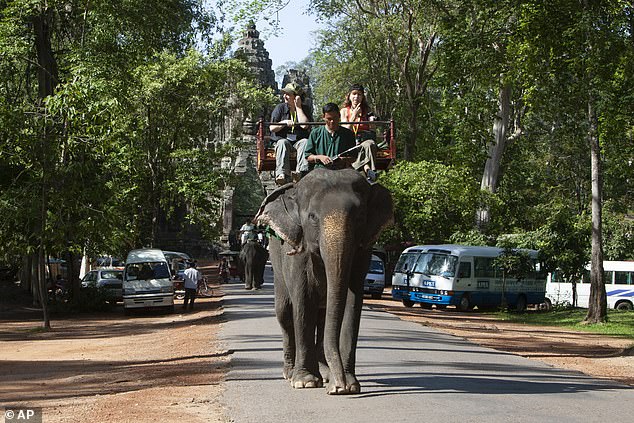 Apsara Authority, the government agency that oversees the Angkor archaeological site, said it is important for the animals to be able to live in their natural habitat. A tourist ride is seen (above) in 2009

Long Kosal, a spokesman with the Apsara Authority, which manages the park, said that some of the animals were ‘already old’.

He said: ‘Using elephants for business is not appropriate anymore. They will live out their natural lives there.’

The company that owns the elephants will continue to look after them, Kosal added.

He said two of elephants have already been taken by truck to their new home and the rest will be gradually transported through the end of this year.

So far, five of the 14 working elephants have been moved to a community forest about 25 miles (40 kilometres) away from the temples.

Cambodia has long come under fire from animal rights groups for ubiquitous elephant rides on offer for tourists, also seen in neighbouring Thailand, Vietnam and Laos.

The elephants are broken in during training and rights groups have accused handlers of overworking them. 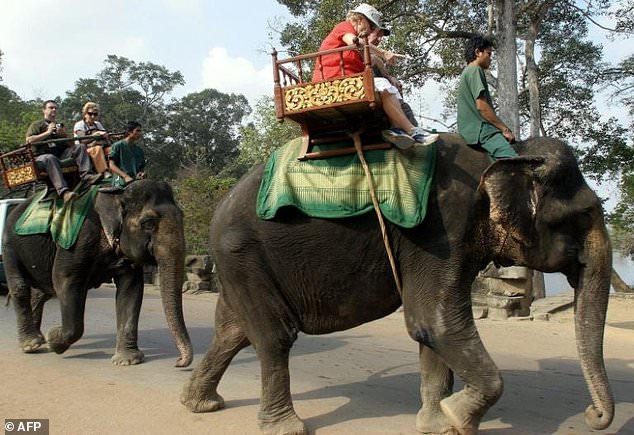 Cambodia’s Angkor Wat complex attracts a large number of tourists, and many opt for elephant rides around the ancient temples

In 2016, a female elephant died by the roadside after carrying tourists around the Angkor Wat temple complex in severely hot weather.

The animal had been working for around 45 minutes before she collapsed.

The death of the female elephant in 2016 of heart failure after giving a tourist a ride triggered an outpouring of grief and criticism on social media.

A petition was posted on the website change.org addressed to the Apsara Authority calling for the end of elephant riding there.

Domesticated elephants used to be employed in large numbers for logging in Southeast Asia.

Mechanisation and deforestation pushed most of them out of that role, and they are now often found at tourist attractions.

Animal rights activists are concerned that they are mistreated when used for rides and tourist shows.

The temples at Angkor, built between the 9th and 15th centuries, are Cambodia’s biggest tourist attraction, as well as a UNESCO World Heritage site and a symbol of national pride that is emblazoned on the Cambodian flag.