That’s got to hurt! Camel uses its thick, leathery lips to munch on dozens of desert cacti with six-inch spikes

Arabian camels aren’t known for their kissable lips. Their large, leathery snouts are best kept at a distance.

But what they lack in good looks, camels make up for it sheer determination. Their thick lips can handle almost any kind of desert vegetation – including cacti.

In this squirm-inducing video a camel works its way through a handful of cacti with six-inch long spikes.

These animals are not to be trifled with.

Their tough mouths chew the spikes which are then digested by their three stomach chambers.

They also quench their insatiable thirst with the large amounts of water stored inside the plants.

Camels can last for up to six month without food or water – they are perfectly adapted to the desert.

Their nostrils can close to keep sand at bay, and they have bushy eyebrows and two rows of long eyelashes to protect their eyes. Big foot pads help them navigate rocky terrain and shifting desert sands. 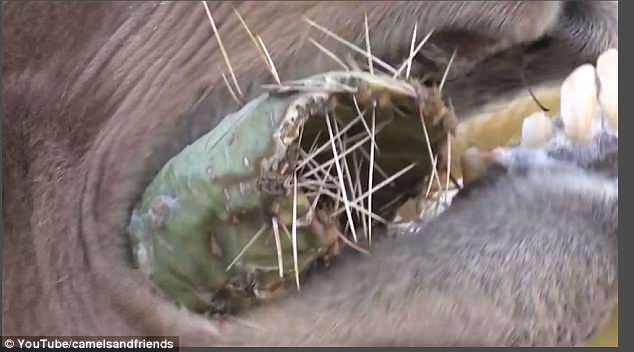 Ouch! The camel chows down on a spiny cacti but seems entirely relaxed 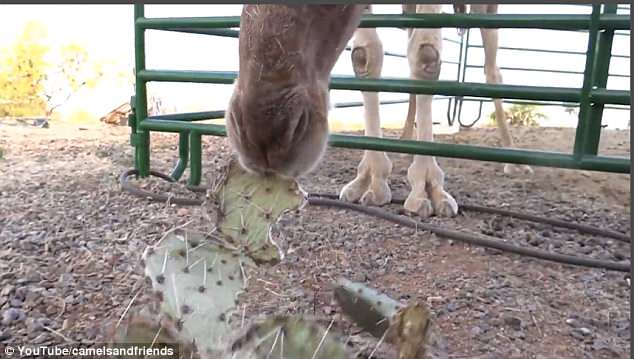 Viewers saluted the animal’s formidable appetite with one exclaiming: ‘That’s amazing and terrifying all at the same time.’

Social media user Sabrina said: ‘If this isn’t proof camels are adapted for desert environments, I don’t know what is.’

But others found the video difficult to watch. One said: ‘I cringed watching this whole thing.’

Another added: ‘I don’t think I’ve ever continuously winced this long…’

One user echoed that sentiment, saying: ‘This just makes my mouth hurt watching this.’

Natalie added: ‘They probably have really tough skin in their mouths but I’m still shuddering.’