A drug dealer who got his pet monkey so high it had to be removed by the RSPCA has been sent on a ‘thinking skills’ program after he admitted selling cannabis.

Joe Forrestal, 23, kept his marmoset Caesar in a tiny cage where it inhaled the fumes as he smoked up to an ounce of powerful skunk weed a day.

The atmosphere was so dank that the animal’s fur was covered in green particles and his erratic behaviour indicated he was stoned. 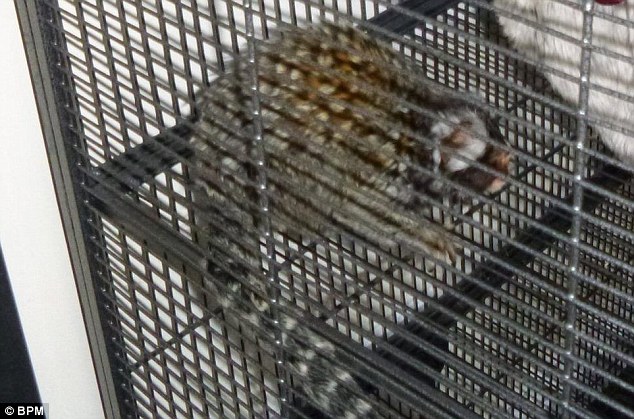 Caesar was found in a distressed state after his owner, a drug dealer, got him high on cannabis

RSPCA inspector Nicole Broster said: ‘He was very lonely and made high pitched contact calls suggesting he was looking for companions – it was very distressing to hear.

‘He was being kept indoors in a chinchilla cage which is completely inappropriate for a monkey.’

Forrestal was accused of poisoning the primate but those charges were dropped because prosecutors could not prove it was deliberate.

In April, he was banned from keeping pets for five years and fined £1,410.

Southwark Crown Court heard police stopped him when he was riding a moped near Paddington station.

Prosecutor Abamtika Prakash said: ‘Upon seeing them [the police] he got off and ran away but he was detained after a short foot chase.’

A search beneath the seat compartment of the bike revealed 49 grams of cannabis, around £500 worth, 3.5 grams of cocaine and £178 cash. 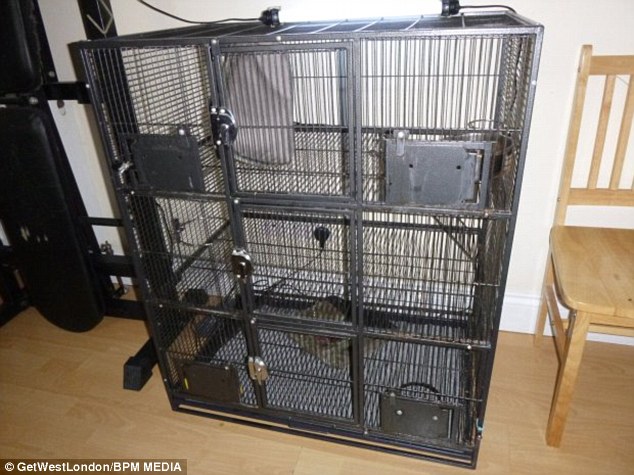 Forrestal has been in jail for three months after breaching a criminal behaviour order he was previously given for dealing cannabis.

He has 17 convictions for 26 offences and has been a heavy smoker of cannabis since his teens, the court heard

His lawyer, Andrew Foreman, said he consumes up to seven ounces of the drug a week and uses it to treat his ADHD.

When Judge Michael Grieve told him he would be suspending his sentence, Forrestal kissed the rosary around his neck and thanked the judge.

Forrestal, of Maida Vale, was given a 21 month sentence suspended for two years and ordered to take part in a ‘Thinking Skills’ program after he admitted possession with intent to supply cannabis and possession of cocaine.

For the breach of the criminal behaviour order, he had a further two months added to the 20 month suspended sentence he has been serving since January.