A Boeing 747 cargo plane skidded off the runway at Halifax Stanfield International Airport in Canada’s east coast province of Nova Scotia Wednesday after landing in a strong tailwind.

Four crew members were sent to hospital with minor injuries after the 5.15am incident where the Skylease Cargo aircraft went 210 meters off track from Runway 14, crashed into a large localized antenna, had two of its four engines torn off and caught on fire under the tail.

One witness said the damage done to the aircraft was ‘kind of crazy to see’ as it sat 50 meters from the fence that marks the parameter of the airport. 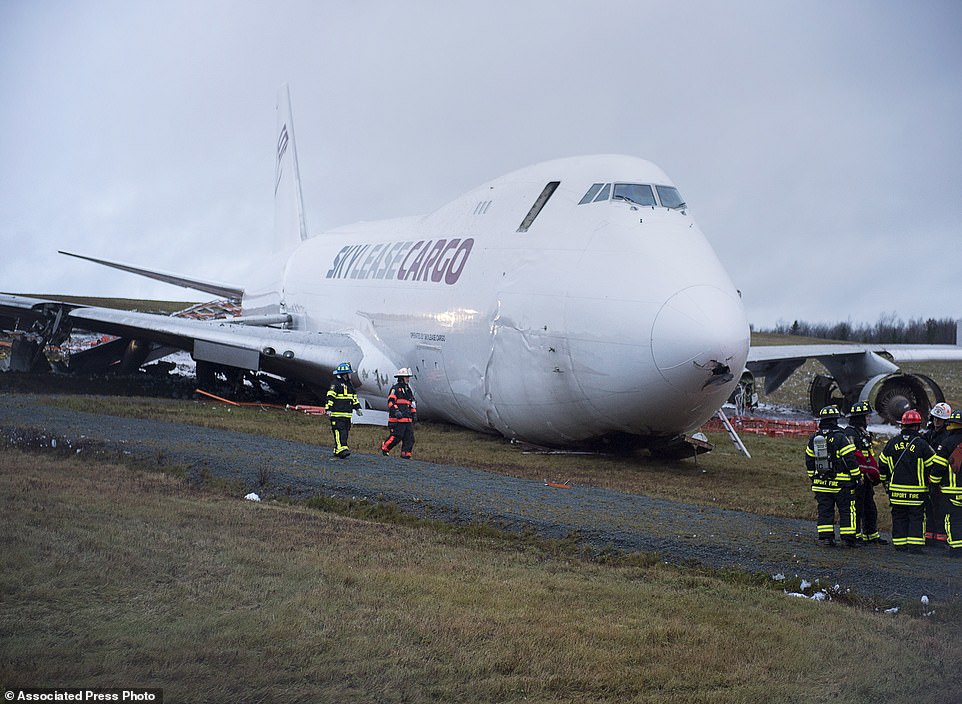 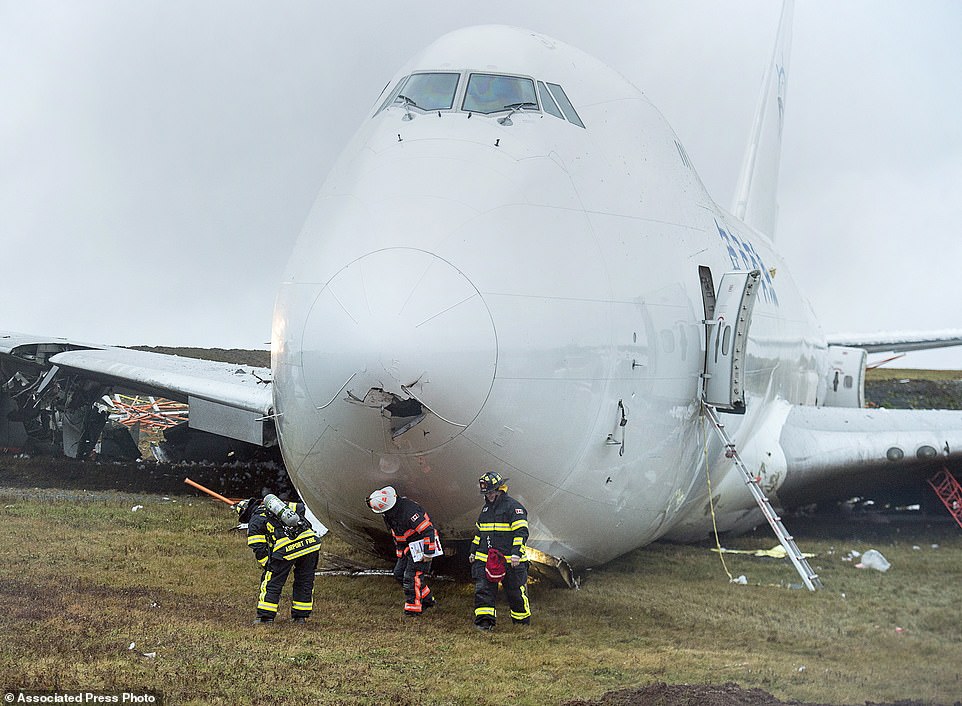 The nose of the white aircraft showed moderate damage on Wednesday 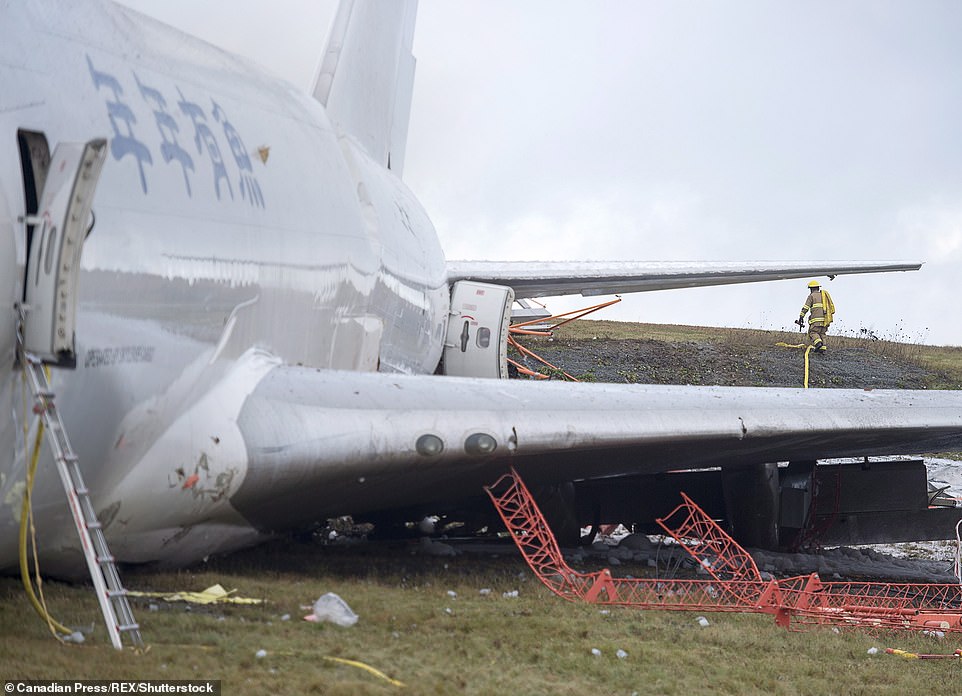 The nose of the white aircraft showed moderate damage. The underside of the plane appeared to be cracked and heavily damaged.

‘The motors were tore off and the wings were cracked off. And it looked like halfway through the plane it was broke in half,’ John Fudge said.

He saw the 183,500kg plane before authorities sealed off the nearby Old Guysborough Road on the eastern side of the airport.

An aluminum ladder trailed down from the main door near the front. 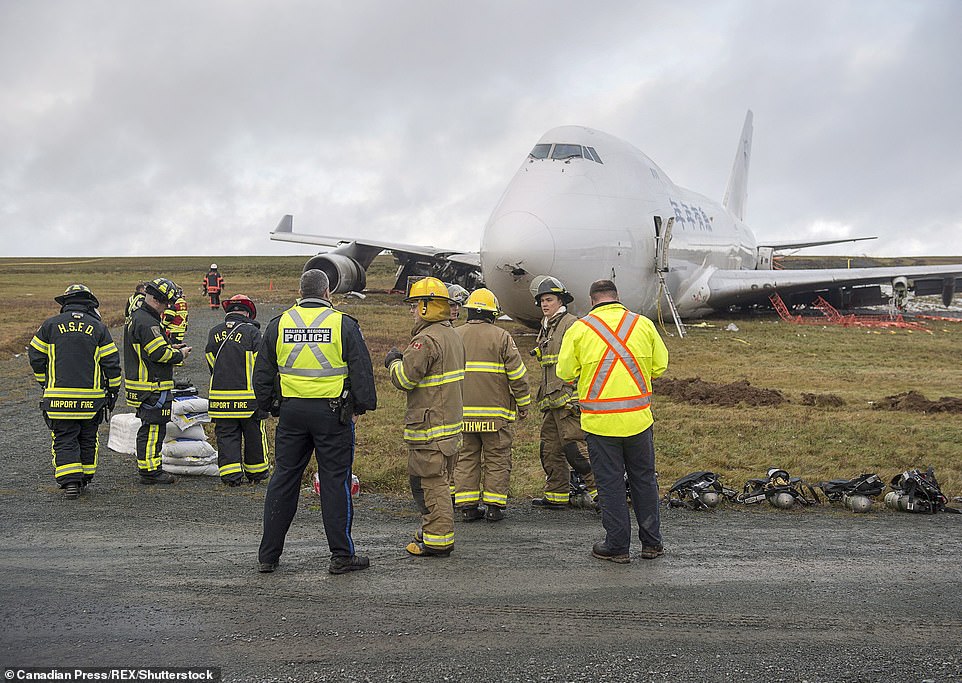 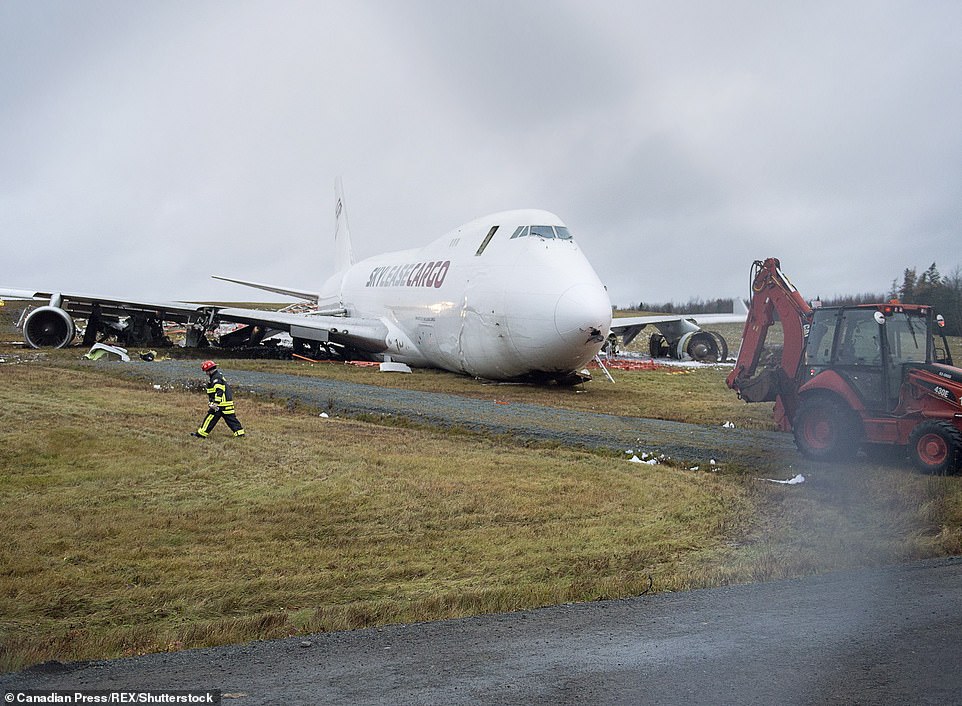 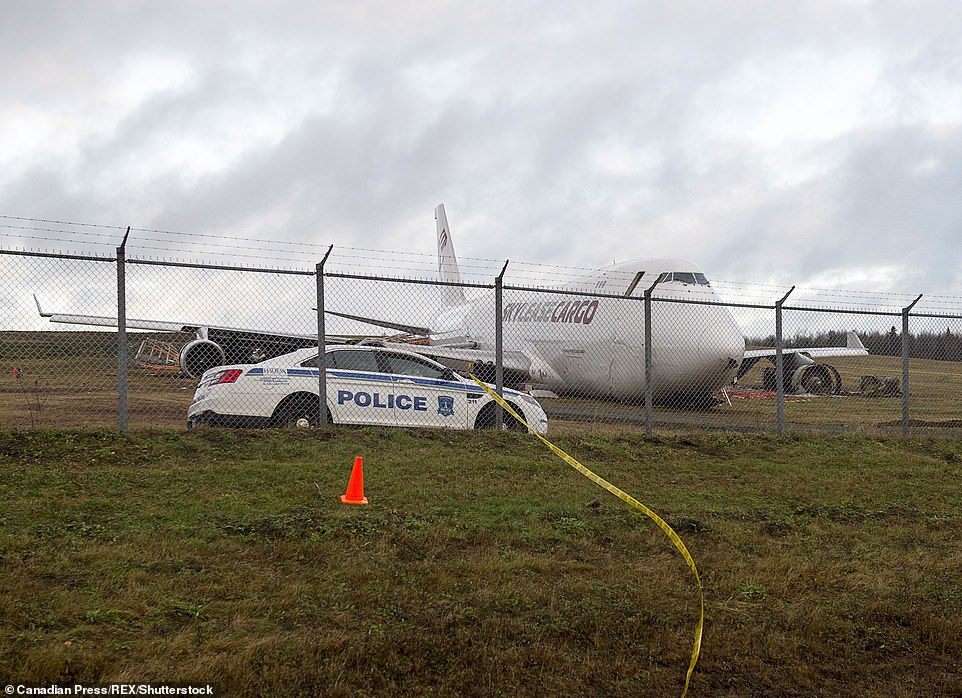 Flight KKE 4854 was arriving from Chicago and was due to be loaded with live lobster before heading off to China.

As an investigation began with the examination of the aircraft, surrounding terrain and flight records, it was noted the rainy conditions were ‘an immediate red flag’.

Larry Vance, an aviation analyst and accident investigator who spent 25 years with the Transportation Safety Board of Canada, said the rough weather left no room for deviation – this could include landing at high airspeed or delaying the landing.

‘It takes longer to stop on a wet runway. It could be they got into a situation we call hydroplaning,’ The Canadian Press reports he said at a media briefing.

Winds were raging at 33km per hour from the west at 250 degrees and with the aircraft moving in a southeastern direction, it caused ‘quarterly tail winds’.

‘I believe it was the pilot’s request (to use) that runway, but that’s preliminary,’ lead investigator Austin Adams told a media briefing at a hotel near the airport Thursday. 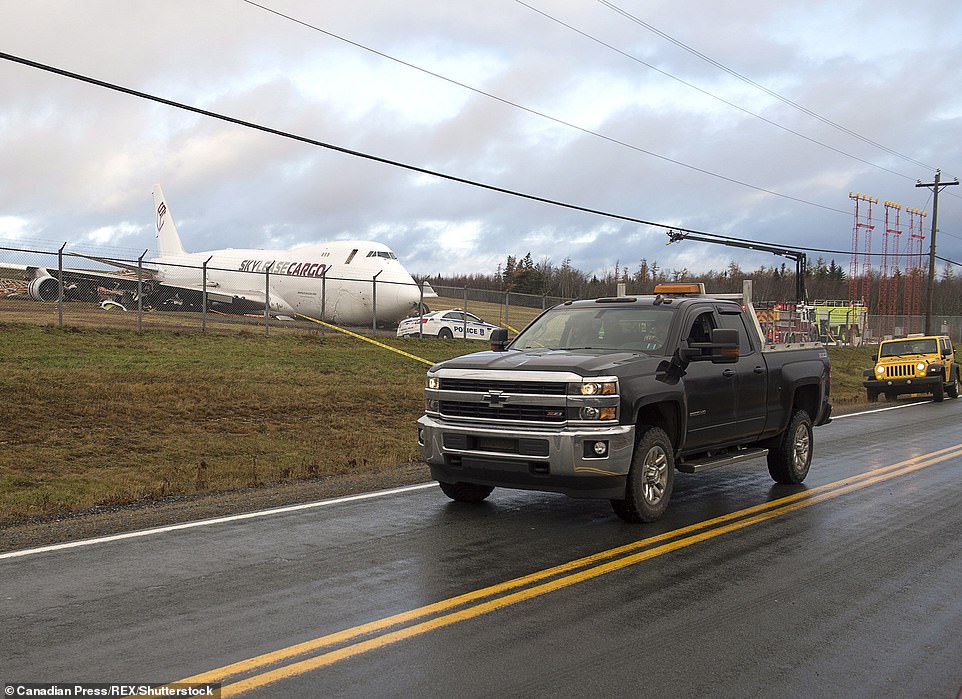 Larry Vance, an aviation analyst and accident investigator who spent 25 years with the Transportation Safety Board of Canada, said: ‘It takes longer to stop on a wet runway’

All aircraft are designed to land in windy conditions and a good gust can even be beneficial to pilots in order to give them extra lift.

However the pilot must also consider the what they have on the runway to help them and the individual factors of a plane.

Transport Canada says at 60 meters of buffering must lie at the end of a runway. However it recommends an additional 90 meters to measure up to 150 meters in total.

Halifax only has 140 meters. While it’s 10 meters less than Transport Canada recommends, it’s less than half the 300-meter stretch the International Civil Aviation Organization requires.

TSB investigator Isabelle Langevin will be looking into the specific limits for the Boeing 747-400 and Adams said human behavior will also be a big part of the investigation from a team of 15 people. 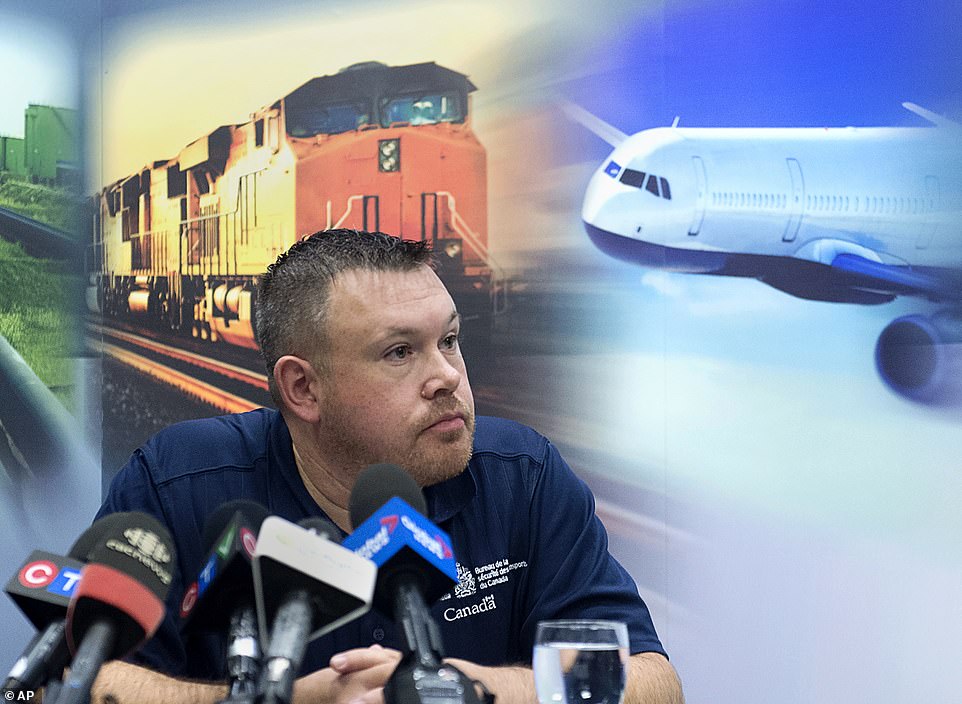 Austin Adams, the Transportation Safety Board investigator-in-charge, delivered a briefing regarding a SkyLease Cargo plane at Halifax Stanfield International Airport, on Thursday 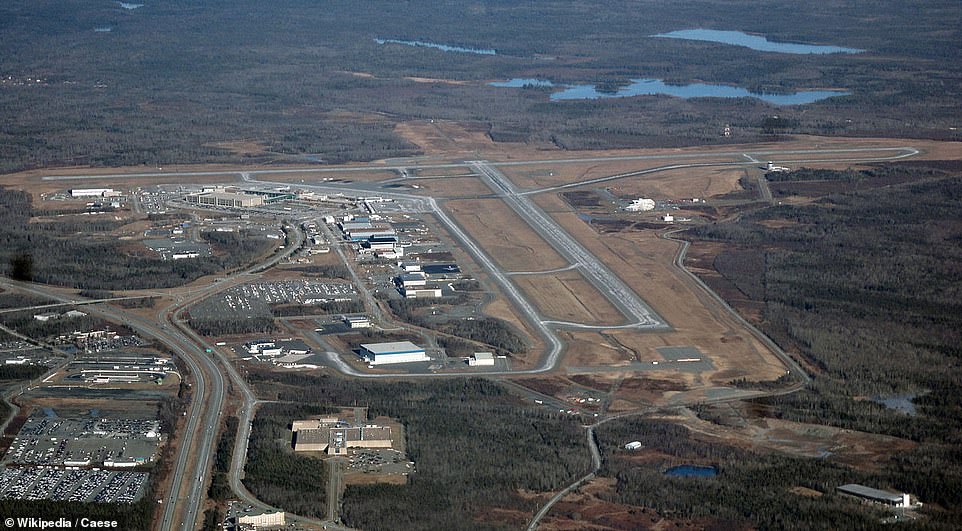 A specialist will interview staff and witnesses at the airport and analyze recording equipment from the cockpit.

‘I don’t want to speculate or state anything,’ Adams said. ‘I want to engage the crew and speak with them about their decision-making process.’

While the airport canceled flights immediately after the incident, the main runway had reopened by 8am the same day.

The same airport has experienced two crashes in recent years, but on a different runway.

On October 14, 2004, seven crew members were killed after an MK Airlines 747 dragged its tail and burst into flames in a wooded area during takeoff. 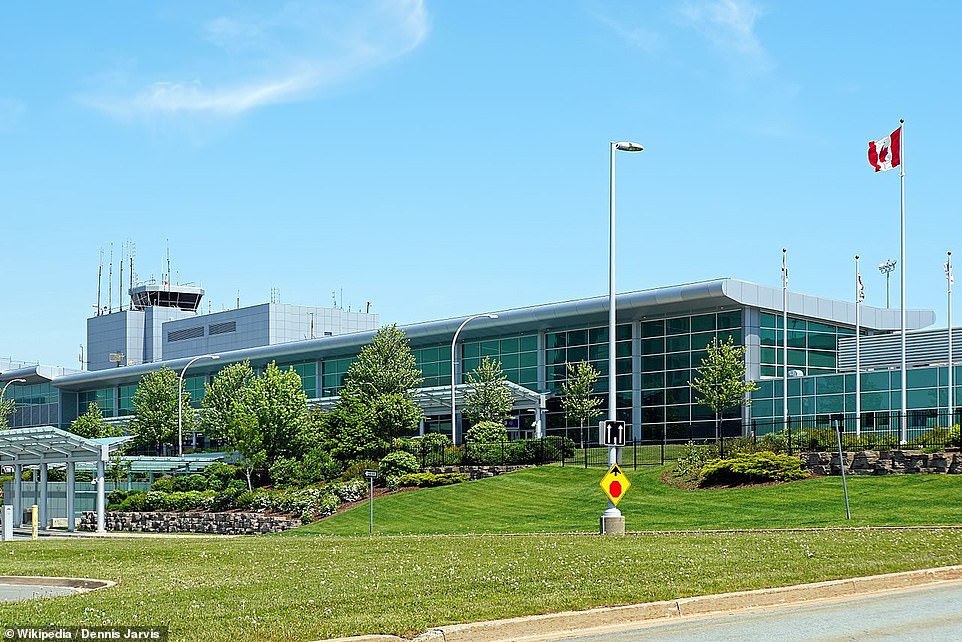 Inadequate software and lack of training were noted as causes.

Then March 29, 2015, 25 people were injured after an Air Canada 624 passenger plane crashed near the runway threshold as it tried to take off in a blizzard.

Poor visibility and lighting were said to be factors in causing the aircraft to bounce in the air and careen along the tarmac on approach.

‘We are very proud of our safety record,’ she said. ‘Obviously, safety is our number 1 priority and we are now focused on resuming our operation, ensuring the safety of our passengers and working with the officials to determine how we can assist with the investigation.’