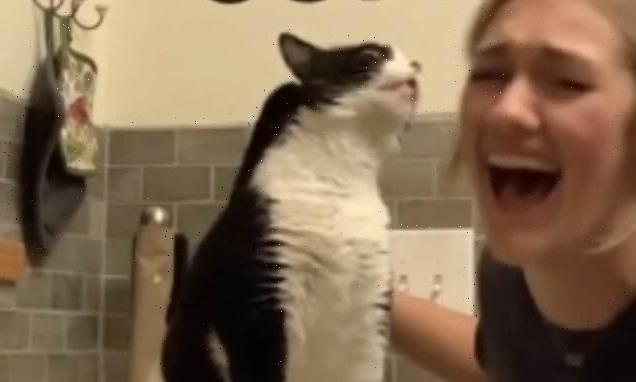 That’s the spot! Cat has a very vocal reaction to having his back scratched

This is the moment a cat has a very unusual reaction to being scratched on its back.

Feline Bentley can be heard gurgling and seen rolling his head from side to side as Tessa Francoise howls with laughter as she gives the pet a rub.

The footage was taken at Tessa’s home in Hurst, Texas.

In the video, Tessa, who does not own Bentley, starts recording as the animal – keen for attention – walks along a kitchen top behind her.

‘He will not leave me alone, just waiting until I do it,’ she says with a smile as Bentley brushes past.

Tessa then prepares to demonstrate what she is referring to, holding back a laugh before saying: ‘Are you ready?’ as she goes to stroke Bentley.

She puts her hand on the cat’s back just above its tail and moments later the animal starts to gurgle and stretch out his head.

The odd display leaves Tessa in fits of laughter as Bentley sits patiently waiting for her to give him a scratch again. 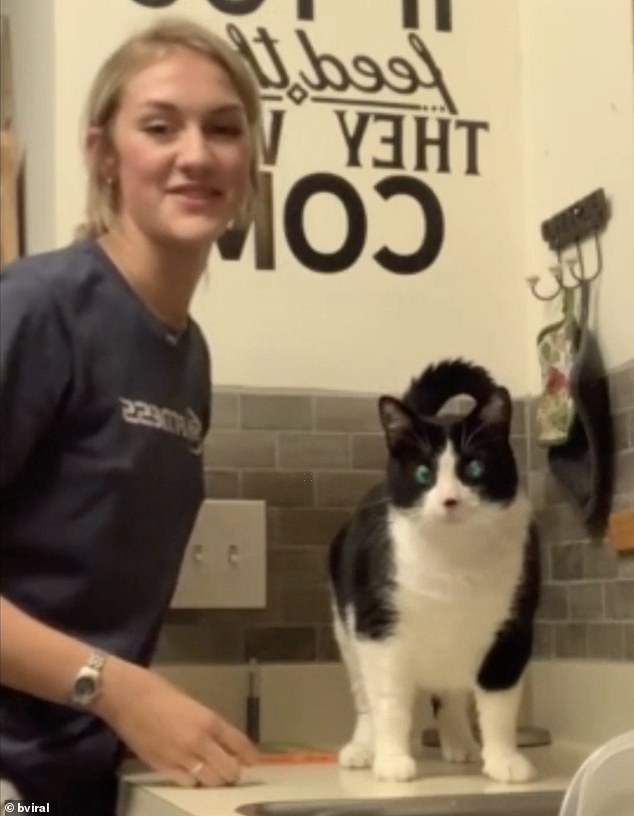 Tessa Francoise, from Fort Worth, Texas, recorded herself in fits of laughter as she scratched Bentley the cat’s back, causing him to gurgle and roll his head from side to side

The video has since gone viral on TikTok, being watched over 4.5million times and receiving 1.3million likes.

Jessica Armstrong commented: ‘Hahaha I have four cats and none of them do that, I’m dying, this is too funny.’

Others including Holly Gray joked that the cat was ‘broken’ like a computer that needed to be rebooted.

Jordan Graegin added: ‘Have you tried unplugging the cat and plugging him back in??’ 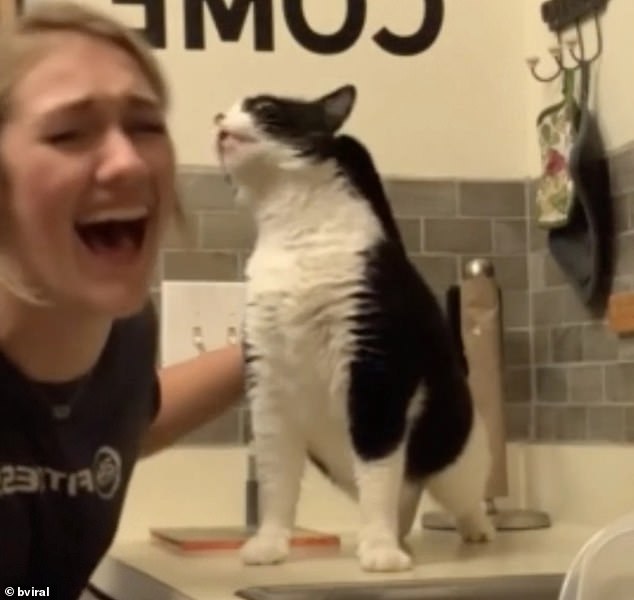 Responding to the comments Tessa said: ‘He just starts talking to his demons when I scratch closer to his tail.’

However others warned that Bentley could actually be suffering and urged her to stop and take him to a doctor instead.

Christina Long: ‘This can actually really hurt cats. I’ve heard multiple vets say that even though it’s funny, you should not do this to your cat!’

Ryan Crombie suggested the cat may have hyperesthesia, adding: ‘Get tablets from the vet for it and stop doing that to your cat it might seem funny but its actually painful muscle spasms.’ 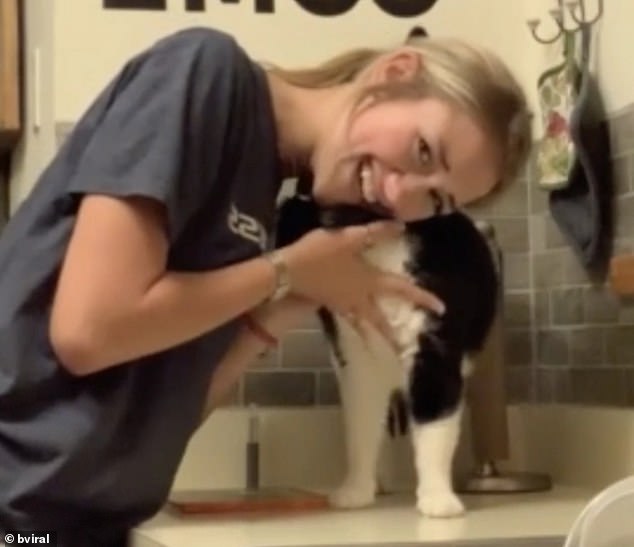 The video has since gone viral on TikTok, being watched over 4.5million times and receiving 1.3million likes

Hyperesthesia is an extreme sensitivity in an area of a cat’s skin, often on its back in the area right in front of the tail.

Owners have told of getting sudden reactions from their pets if they touch this area and have reported symptoms including violent behaviour and strange vocalisations.

Tessa however denied the suggestions, adding: ‘Bentley is in no way shape or form in any pain, and Bentley loves getting his butt scratched nonetheless.

‘So the people saying I’m abusing and torturing the cat I really want you to go look up what torturing and abuse on animals looks like because in no way, shape or form am I abusing or torturing him.’