This is the moment a ginger cat stalks and pounces on its prey in a shocking reminder that cute, domesticated cats can also be killing machines.

The ginger cat, called Morris, lurks behind a plant and watches a squirrel sitting on a blue bin as it waits for the perfect moment to launch its attack.

A man can be heard talking in the video, thought to have been filmed in America, as his pet prepares to run at the rodent. 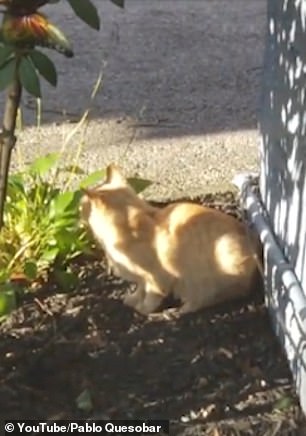 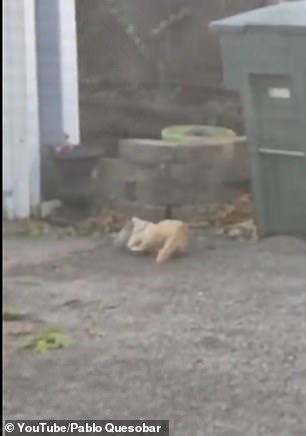 He narrates the hunting scene, saying: ‘He’s moved a little bit. He has patience.

‘I hope a little bird doesn’t come out right now. Could be real bad for him too.’

Morris then bursts into action and dashes across the back yard and jumps onto a small wall behind the bins.

As the squirrel tries to escape, Morris leaps up at the bin and grabs the rodent by the neck.

The squirrel tries to resist Morris’s teeth but it cannot escape, and within a few seconds stops squirming.

Victorious Morris then starts to strut towards the camera but pauses for a few seconds while the squirrel stops moving.

The man recording from inside the house says: ‘Wow what a catch. And by the throat like a big cat. That is unbelievable.

‘I’ve never seen that before. Nature in my back yard. What a catch.’ 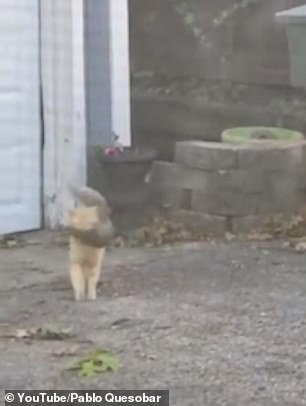 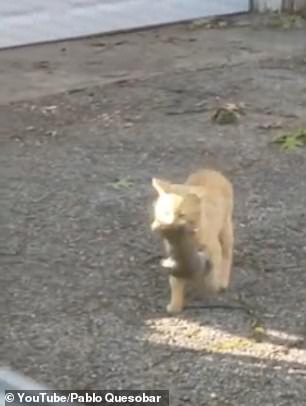 He grabs the squirrel by the neck (left and right) and holds it between its teeth until he’s sure it has stopped squirming. He then proudly struts back towards the house with his prey

Morris then walks further towards the house but quickly turns back around, with the squirrel still dangling from his mouth, when he spots the camera.

Research by the Smithsonian Conservation Biology Institute and the U.S. Fish and Wildlife Service in 2013 estimates felines are responsible for the deaths of 1.4 to 3.7 billion birds and 6.9 to 20.7 billion mammals every year in the US, reports ABC.

In the UK charity Mammal Society estimates that cats in Britain catch up to 275 million prey items a year, of which 55 million are birds, reports RSPB.

Hunting is a natural behaviour in cats, and many have an overwhelming drive and desire to hunt.

Mother cats often bring their kittens small mice and birds for them to play with and they will learn hunting technique from her.

Pet owners can try and deter their cat from hunting by putting a bell on their collar and by keeping the cat in during dawn and dusk when rodents might be outside.