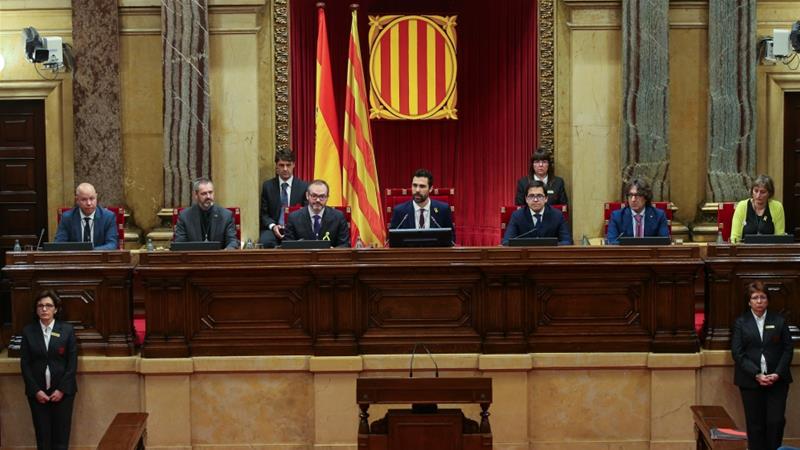 For the first time since Catalonia’s unsuccessful bid to break away from Spain, the northeastern region’s parliament has met for the first time in a step towards establishing a new government.

With the separatist parties forming a slim majority after an election last month, the outcome of the first session on Wednesday saw MPs elect Roger Torrent, a pro-secession politician, as the new parliamentary speaker.

At the end of this month, parliament is also expected to elect a new head of government, with separatist parties, who occupy 75 seats out of 130, looking in the direction of ousted Catalan leader Carles Puigdemont as their preferred candidate.

However, Puigdemont risks being arrested if he is to come back from his self-imposed exile in the Belgian capital, Brussels, following the rebellion and sedition charges the Spanish government and judges levied upon him. 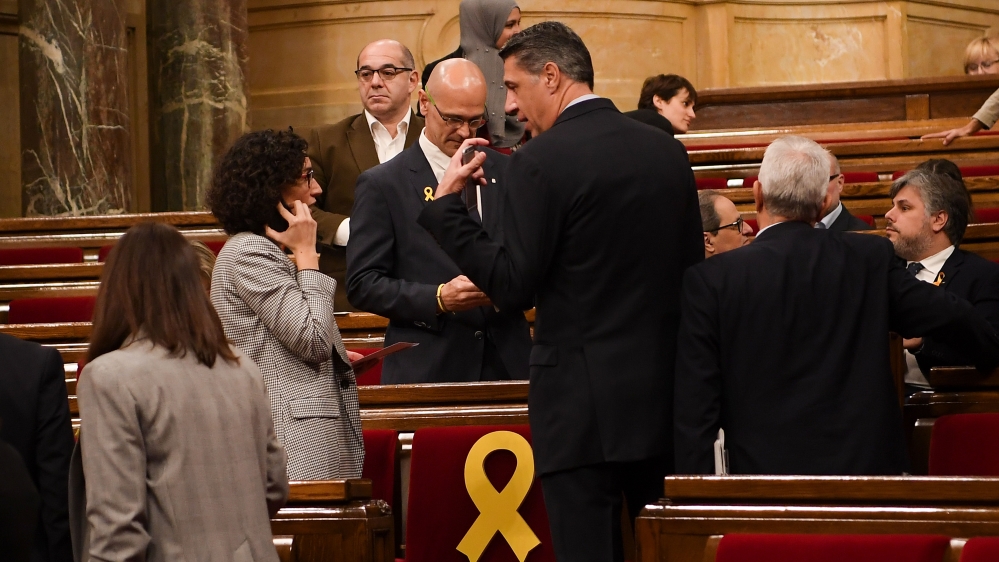 Al Jazeera’s Karl Penhaul, reporting from Barcelona, said that while Puigdemont’s supporters have suggested the former president could rule Catalonia via video link, the central government in Madrid has dismissed the idea.

Furthermore, the Catalan parliament’s own legal experts ruled that any president must be physically present in parliament.

“There are opposition parties in the Catalan parliament who say that they would accept a virtual first minister,” Penhaul said.

“[However,] the Spanish Prime Minister Mariano Rajoy himself has said that he will not allow Puigdemont to come back and be the first minister of the Catalan government.

“That effectively sets both sides – the Spanish central government and the Catalan regional government – once again back on a collision course,” he continued, adding that this is expected to play out in the course of the next two weeks.

Across the parliamentary arena, a number of yellow ribbons were placed on empty seats, to represent absent politicians.

“That was to symbolise those politicians, a handful of whom are in jail in Spanish jails, and others who fled into self-imposed exile in Belgium,” said Penhaul.

They were trying to evade rebellion charges, Penhaul added, that have been imposed against them by Spanish judges last November “because of the way they held the referendum back in October trying to push for Catalonia’s secession.”

The Catalan crisis began on October 1, when the Catalan regional government held a disputed referendum on breaking away from Spain.

The banned referendum was repressed by police trying to stop people from voting, with rights groups calling the tactics used by law enforcement “excessive”.

The dismissed Catalan government said 90 percent of voters chose independence that day, though turnout was less than 50 percent.

After a weeks-long political back-and-forth between Puigdemont and Rajoy, the Catalan parliament voted for independence on October 27.

In response, the Spanish government enacted Article 155 of the Constitution the following day, a previously unused measure allowing Madrid to administer the breakaway region.