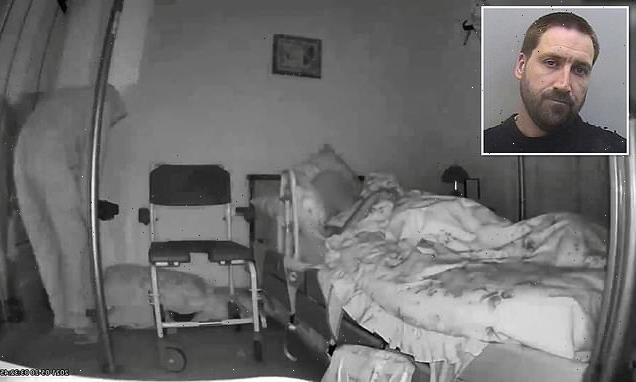 CCTV footage captured the chilling moment an 87-year-old disabled woman who can’t move or speak watched in terror as a burglar crept into her room at night.

The elderly victim was powerless as Dean Lennox, 40, woke her after breaking into her sheltered accommodation in Torquay, Devon, in the early hours of May 20.

Lennox stole rings, £90 cash, and even her late husband’s wallet as the bed-bound pensioner, unable to move or speak after suffering a stroke, watched on in terror.

Reliant on carers and family, she was unable to raise the alarm or call for help as Lennox rummaged through her belongings.

But Lennox’s criminal antics were recorded through motion-activated cameras installed in the elderly woman’s flat by her loved-ones.

Lennox  (right) stole rings, £90 cash, and even her late husband’s wallet as the bed-bound pensioner (left), unable to move or speak after suffering a stroke, watched on in terror

Lennox, 40, of Torquay, left the victim ‘scared and fearful. Lennox sold the ring and other jewellery at a local shop for £45 a few hours later and dumped the wallet outside

He was arrested by police within hours after selling his haul to a local jewellers for £45 – giving them his name and address in the process.

Officers were able to swiftly recover all of the stolen items.

Lennox, of Torquay, Devon, admitted a charge of burglary and was sentenced to three years and four months in prison at Exeter Crown Court on June 21.

Footage of the burglary shows Lennox, dressed in a hooded top, trousers with cargo pockets and trainers, searching the victim’s bedroom using his mobile phone as a torch. 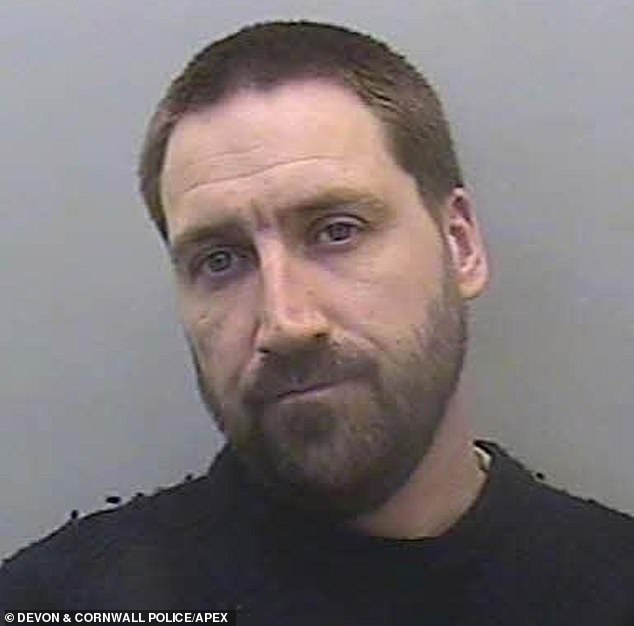 Dean Lennox, 40, of Torquay, Devon, admitted a charge of burglary and was sentenced to three years and four months in prison at Exeter Crown Court on June 21

The elderly woman is seen staring at him, but unable to react.

Lennox soon notices the camera and turns it to the side before trying to remove the batteries and connections to other recording devices in the flat.

Lennox stole £90 in cash and three gold rings. He even took a wallet and bus pass belonging to the victim’s late husband, which she had kept for sentimental reasons.

These were found by officers discarded in the car park of the sheltered accommodation.

The victim broke down in tears when police arrived.

Detective Inspector Jennifer Rose, head of the department, said: ‘We want this incident and the police’s response to send a clear message to those who choose to target vulnerable people within our society.

‘We will go to great lengths to catch and convict those who commit these crimes.

‘In this case, within nine hours of the offence being committed, police had the suspect in custody and had recovered the stolen jewellery.

‘This was a multi-faceted approach by several departments and we are pleased that we could recover the stolen items, but also provide the family with some peace of mind that the suspect in this case has faced justice.’