Skipping along a dirt track hand in hand, these two children had no idea they were centimetres from death.

The brother and sister were playing together under blue skies near their house in Eskdale, north east Victoria.

Their doting mother Alanna, determined to preserve the memory, took a photo of the wandering pair from behind.

After the walk, the mother checked the image and a shiver ran down her spine. 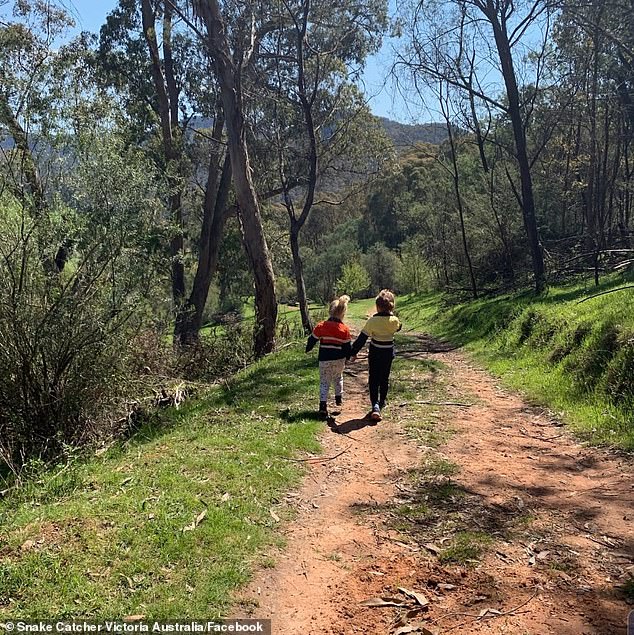 Skipping along a dirt track hand in hand, these two children had no idea they were centimetres from death

Lurking in the undergrowth, just to the right of her son’s foot, was a deadly eastern brown snake.

The species, which can cause a cardiac arrest just minutes after biting, is responsible for 41 per cent of snake deaths in Australia.

It is the second most venomous snake in the world after the inland taipan found in central east Australia.

Snakecatcher Barry Goldsmith shared the chilling photo after Alanna’s father Mark sent it to him.

He wrote: ‘Mark sent me this pic his daughter Alanna took of her kids as they skipped down a track on his property on the Mitta Mitta river.

‘No one saw the large eastern brown snake until they looked at the pics later.

‘The snake saw them coming and watched as they unknowingly skipped past. 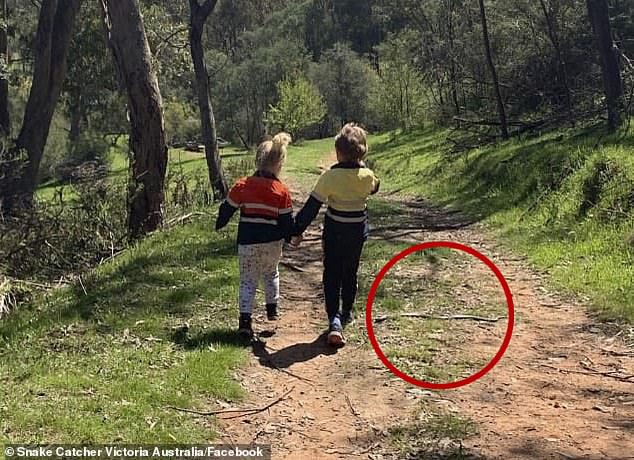 The brother and sister were playing together under blue skies near their house in Eskdale, north east Victoria

He added: ‘Thank you Mark, for sending me the pic and for your understanding and compassion for the animals that we share our beautiful country with.

‘Zoom in to the ground on the right of the kids.

– The eastern brown snake is the species most responsible for deaths caused by snake bites in Australia.

– Although they are dangerous, they will always try to avoid a confrontation and will only attack as a last resort if they are threatened.

-They are native to eastern Australia, but can be found anywhere between the coast to the central desert.

-It inhabits a wide range of habitats but is particularly prevalent in open grasslands, pastures and woodland, and they help farmers reduce rodents.

-They may exceed two metres in length and, on hot days, can move at surprising speed.

-Colour can range from uniform tan to grey or dark brown while their bellies can be cream, yellow or pale orange with darker orange spots.

-The females produce clutches of up to 30 eggs in late spring or early summer.

‘Please be careful, take care this summer, and be nice to snakes’.

Eastern brown snakes are responsible for more deaths by bite than any other group of snakes in Australia.

The sickening discovery comes after experts warned suburban homeowners across the country to prepare for a horror snake season.

Experts said the unusually warm weather this spring has led to an increase in snake sightings, including the deadly brown. 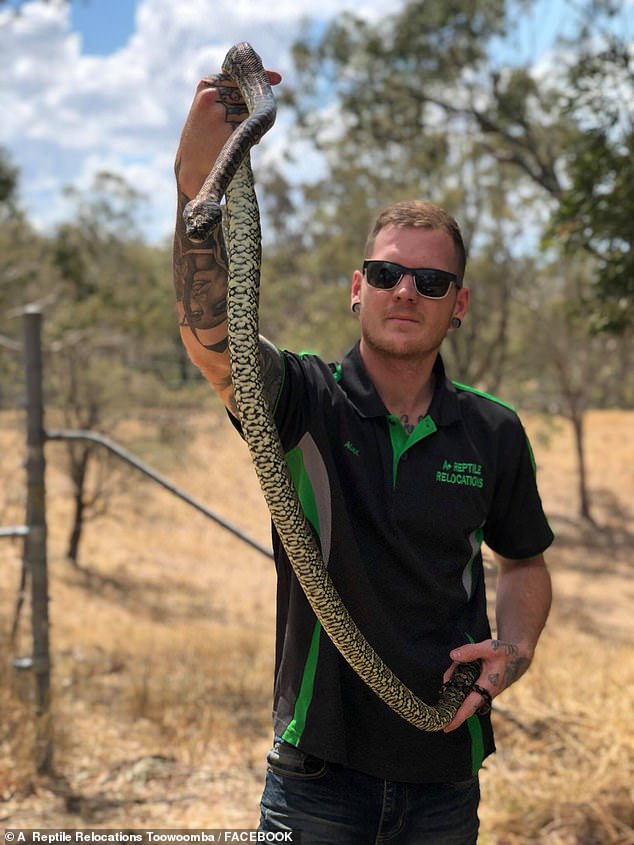 ‘It is out of the ordinary to see snakes this early,’ Australian Reptile Park’s Head of Reptiles Daniel Rumsey said last month.

‘All households should keep grass areas around houses low and well maintained.’

On September 20, reptile catcher Alex Reynolds taunted an eastern brown snake to bust the myths about the snake’s aggressive temperament.

Before Mr Reynolds let her go, he took a video to educate people about how to react if they encounter the deadly creature.

How to avoid snakes this season

Do not leave shoes at the doorstep

‘She’s only small, but this is their defence – I’m in her space she’s scared of me she doesn’t understand what’s happening’ Mr Reynolds can be heard saying.

‘She just thinks I’m trying to kill her. But if you watch this, if I stay still and I pose and I’m no threat to her she’ll back off and she’ll start to ease herself away from me’.

Mr Reynolds then begins waving his hat to demonstrate how the snake gets ready to strike at quick movement.