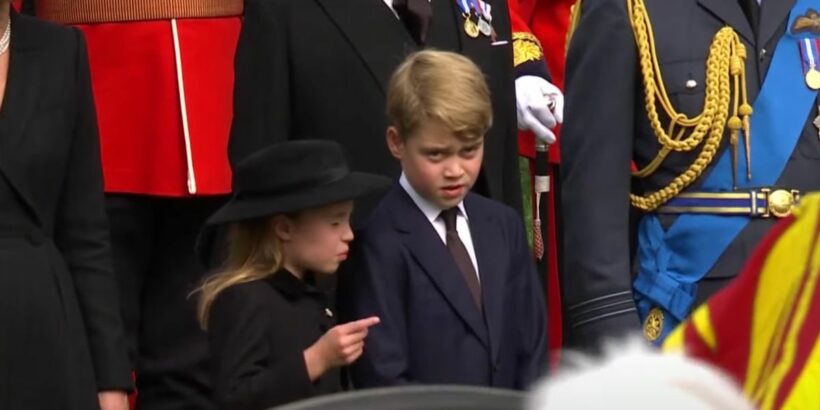 Princess Charlotte and Prince George have been praised for their stoic attitude at the Queen's funeral today – but one moment still confused the younger royal.

The royals stayed next to their mum, Kate Middleton, and dad Prince William, at Wellington Arch as they watched the bearer party lift their beloved great-grandmother's coffin from the gun carriage.

The Grenadier Guards approached the carriage, placed their hands under the flag and unlocked the harness before taking the coffin out.

Jeremy Freeman, who analysed the siblings' on-camera exchange, told Daily Star that Charlotte was "curious" about the way the soldiers handled her beloved "Gan Gan's" coffin.

According to Jeremy, Charlotte asked George: "What’s under there? Is it so she doesn’t slip out?"

The seven-year-old princess was previously seen being "told off " by her step-grandmother Camilla after she apparently got "pinched" by her brother.

She was spotted saying "ow" out loud while standing in a queue next to Camilla.

Charlotte later got emotional over the sombre scenes.

And viewers shed a tear at the sight as well, with one saying: "This picture is heartbreaking."

"I really feel for Prince George and Princess Charlotte, so young to take this in and everyone is exhausted," a second wrote.

A third added: "Poor Princess Charlotte, such a long day saying goodbye to her beloved Gan Gan. She would be so proud of you sweetheart!"

The Queen is said to have had a hand in designing the State Hearse that transported her coffin years before she died.

The Royal Household is said to have collaborated with Jaguar Land Rover on the state hearse that was used today (September 19) as the Queen's coffin was transported in the state funeral in London.

It is claimed that the monarch had a hand in the design of the vehicle were heard, addressing both the clear view and the Royal Cypher present on the vehicle.