Montana: For Helena Brandfors, moving to Hawaii from Sweden eight years ago seemed like a dream come true.

She purchased an acre of land in an area called Leilani Estate for $US22,000 ($29,000) and set about building her dream home. The land appealed because of its price, as well as being in a very lush green area, close to both the ocean and the small "hippy town" of Pahoa just six kilometres away which plays host to regular music events and a farmers' market.

But there was always an element of risk to her purchase. Brandfors lives within 500 metres of a massive fissure on Kilauea volcano, which since early May has been pumping out a river of blue orange lava and sulphur. It has already destroyed hundreds of homes in her neighbourhood. And now the lava flows threaten to engulf hers. 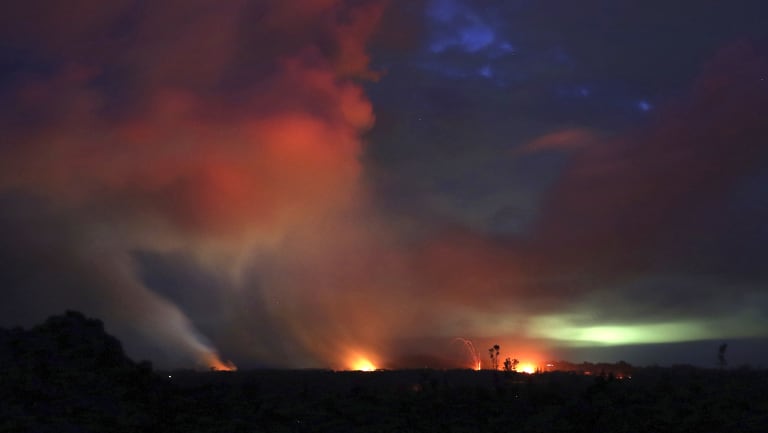 Lava, white plumes of acid and extremely fine shards of glass shoot into the night sky from active fissures on the lower east rift of the Kilauea volcano near Pahoa, Hawaii.

“None of us ever thought this would happen during our lifetime. Flows like this occur in the hundreds of years. It was a gamble with time and we lost,” she tells Fairfax Media. “I evacuated on May 3, and have not been able to return, except for a couple of short visits, wearing a gas mask, to retrieve important papers and sentimental items.”

“Tonight was especially toxic. We had 'Peles Hair', fine particulates of glass that are showering us, our cars, our lungs, our roof and gutters, used for rainwater catchment. The roads are crunchy, the air is thick, and hot and humid. The Leilani neighbours that are upwind and uprift, many have stayed, as they don't have anywhere else to go. It's a scary place at night, with methane gas explosions from burning and decaying trees and gases,” she says.

As extreme weather events become more common across the US, questions are being asked about the Trump administration's ability to respond appropriately. 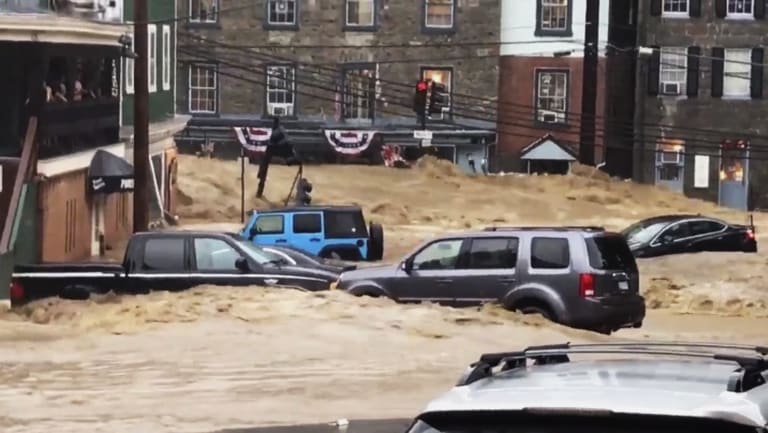 In Baltimore last week, an extreme flooding event left cars floating down the main street of the historic town of Ellicott City, Maryland, where locals reported water levels reaching 1.8 metres deep. It marks the second "1-in-1000 year" rain event in two years to hit the town on the banks of the Patapsco River.

For some local business owners such as Sally Tenant Fox, who runs a giftware story in Ellicott City called Discoveries, the flooding this week was the second time she has lost everything. Now she contemplates rebuilding: “I am stunned at the destruction,” she says.

“This flood is far worse than anything I could have envisioned. …right now I am having a hard time dealing with this flood devastation. My life, business and home have been in that building and I am sad beyond my ability to express it,” she says.

Other parts of the US have also been experiencing an increase in extreme weather events. In Florida this week subtropical storm Alberto moved through the Deep South bringing flash flooding east and north from Florida to parts of the Carolinas and the Ohio Valley, forcing the three states to roll out emergency response plans.

Last year was the most costly on record in terms of extreme weather with 16 recorded billion-dollar disasters that added up to a more than $US300 billion in losses, according to the National Oceanic Atmospheric Administration.

According to Robert Mendelsohn, an environmental economist from Yale University, 60 per cent of worldwide damage from hurricanes happens in the United States. He says the US stands out from the rest of the world in terms of its vulnerability to extreme weather, and lack of government policy around preparedness and zoning.

“The US has not yet adapted to the climate that we live in. Whether or not people should be allowed to build in such risky places is the question that has not been addressed yet in the USA. It will only get worse with global warming,” he says.

Christina DeConcini, director of government affairs for the World Resources Institute, says that instead of acknowledging the increasing incidents of extreme weather across the country and helping to build resilience, the Trump administration has instead been undoing protections established by the Obama administration.

“The Trump administration has rolled back important executive orders on climate resilience even as we are seeing massive damaging weather events all over the country,” she says.

“We know that people who are in lower economic stratas are more vulnerable to extreme weather events just because they have fewer resources or other homes they might vacate to, as well as being unable to build for resilience. They often don't have insurance or other back up – the lower income communities are going to be least able to deal with these impacts and to get back on their feet.”

According to Jeff Schlegelmilch, deputy director of the National Centre for Disaster preparedness at Columbia University, this connection between poverty and extreme weather vulnerability is a trend we are seeing right across the US.

“People are going to try to buy a home where they can afford to buy a home,” he tells Fairfax Media. “We are zoning areas that probably should not be zoned. We need stronger policies to prevent people from living in these areas. And mostly we need to shift our national priorities to building preparedness to extreme weather rather than dealing with each circumstance on an ad-hoc basis.”

All of this is cold comfort to Brandfors, whose Hawaii home remains acutely vulnerable to being engulfed by lava.

“Rich people can pick and choose and buy anywhere. Poor people, or those with less means, have to select where the live, based on price. Leilani Estates was paradise, and it was affordable. I could get up in the morning and drive to the hot ponds, or snorkel down at the tide pools, or take my miniature dachshund for a walk on the paved roads in the quiet forested neighbourhood,” she says.

But having relocated from Sweden to the US, she says she is shocked by the apparent lack of government support to deal with the increase in extreme weather events.

“Here, in America, the 'government', both national and local, relies on our warm generous community efforts, and let us bankroll the relief efforts. The volunteer efforts have been, and continue to be amazing. But where is the government support?

"Instead you have mixtures of families with children, dogs, in tents, as well as elderly couples, who require medical assistance. Our hotels are increasingly vacant with the dip in tourism. Why are we not being offered emergency housing?”