He’s a bit peckish! Shoplifting seagull is caught on video making his getaway from Greggs in Liverpool

A brazen seagull has been spotted stealing a packet of crisps from Greggs in Merseyside.

The shoplifting bird was spotted by construction worker Mick Dowling hovering outside the café at a shopping centre in Merseyside on Monday.

In the hilarious clip, the gull slowly hops towards the glass doors as Mick and his amused colleagues look on.

The brazen bird nabs the packet of Ready Salted crisps from the stand by the door and flees rapidly – leaving Mick and his friends ‘in stitches’.

This is the second time a gull has been spotted stealing crisps from the chain after another video was posted online last month.

Mick, from Preston, Lancashire, said: ‘It was quite a cheeky seagull. It looked really suspicious. 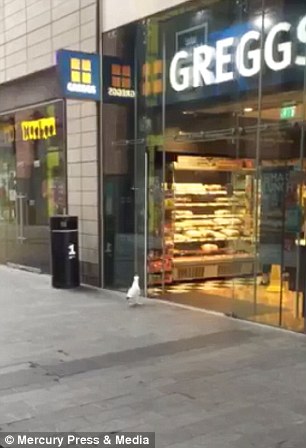 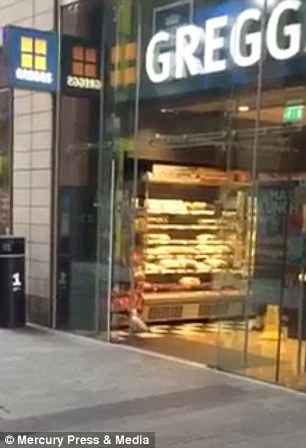 In the hilarious clip, the gull slowly hops towards the glass doors as Mick and his three colleagues stand in amazement

‘We’ve seen it hovering outside before and think it looks like it’s up to something. Now we know why.

‘It didn’t seem fazed at all by the customers coming in and out. It barely even moved out of the way for them.

‘I just pulled my phone out because I thought the bird was funny and happened to catch this on camera.

‘It stole a packet of Ready Salted crisps off the stand within seconds and then it was off. It flew to a nearby rooftop and there were loads of other empty packets on there too. 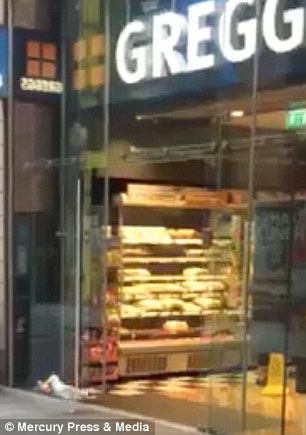 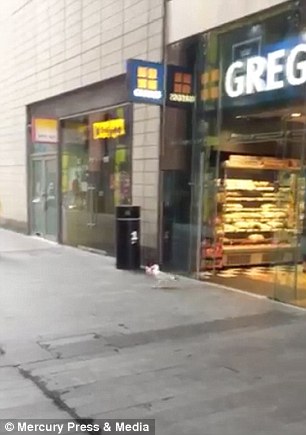 Repeat offender: The cheeky seagull was hovering outside the cafe when Mick spotted it ‘looking suspicious’ outside before it nipped in and nabbed the packet of crisps

‘We were all just laughing and shocked at what we’d seen.

‘It was so funny – it’s not something you expect to see. We were in stitches.’

Mick, a roofer, has been working on the shopping centre since earlier this year, and claims he had seen the bird lurking outside before.

He was drinking his morning coffee while watching the bird’s crafty advances.

Mick said: ‘I’m working on a job at Liverpool One and me and a few of us nipped in for a coffee on Monday morning. 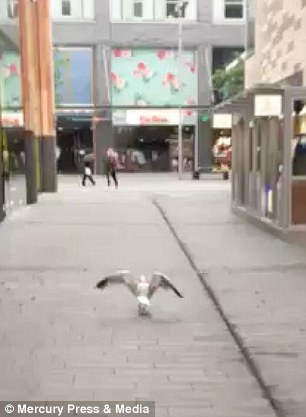 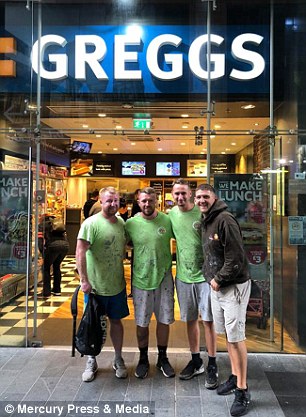 The cheeky seagull spreads it’s wings to fly up to an empty rooftop where Mick, right with his work colleagues, said there were there were other empty packets

‘Me, my boss and two of the other lads were just stood there for about 10 minutes watching it at 7am – it was really early.

‘We’d come outside after buying a drink and we were all watching it as it hovered around the doors.

‘The staff didn’t even seem bothered by it and they weren’t chasing it away. It must be a regular visitor.

‘I’ve been working there for about 10 weeks and I’ve seen it quite a few times lingering outside.’