A chef who hit back at TripAdvisor critics is regretting that his ‘big mouth’ caused his restaurant to plummet from his city’s fifth place to barely being in the top 20.

Alex Claridge’s Birmingham venue, The Wilderness, slipped down the rankings after he ‘annoyed’ his customers by responding to reviews about the decor and music.

His venue features a Brexit-inspired menu entitled Things Fall Apart, and his experimental decorations – moss cracking through tiled walls, for example – has earned praise in the national media.

But the 30-year-old said he was ‘seriously affected’ financially by the drop after he promised to use a customer’s verdict of his eatery – ‘more strange than special’ – as his Tinder bio. 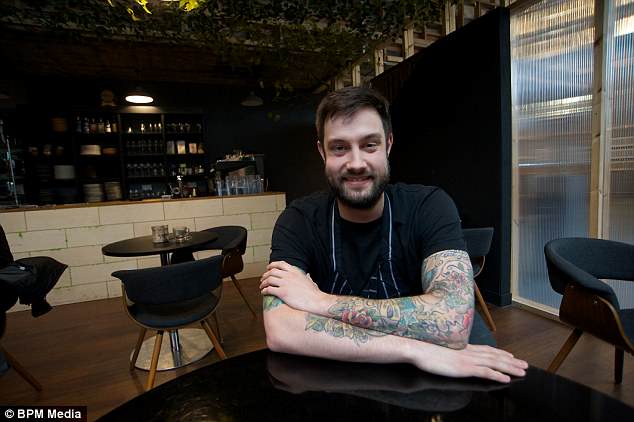 The innovative restaurant – branded ‘dinner as theatrical performance’ in one national website review – has won an army of fans, but some negative reviews were met with responses such as the one below 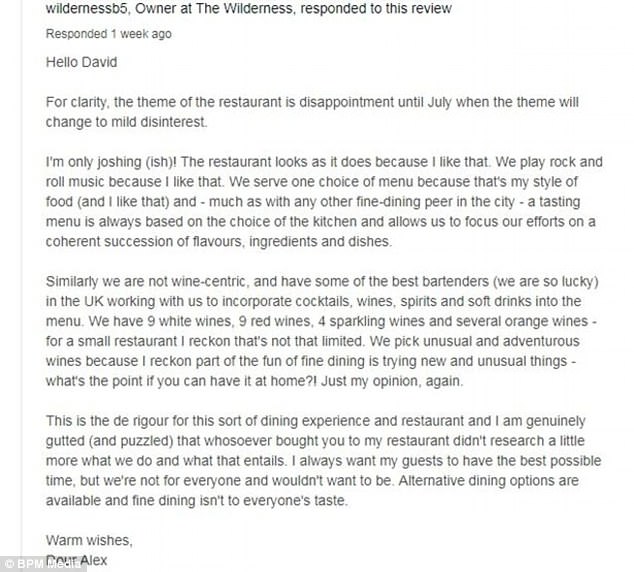 Famed locally for serving ants while blaring rock ‘n’ roll music, Mr Claridge branded TripAdvisor ‘patently b******s’, tweeting: ‘My big mouth has almost got us out the top 20 on @TripAdvisorUK.

‘If I annoy one more person I reckon I’ve done it and gone from top five to top 30.’

The innovative restaurant – branded ‘dinner as theatrical performance’ in one national website review – has won an army of fans and earned a place in the Michelin Guide Great Britain and Ireland 2018.

It made headlines in 2016 when Alex put ants on the menu. But a reviewer who said he’d ‘covered food and farming at the BBC for many years’ said neither he nor his wife would return. 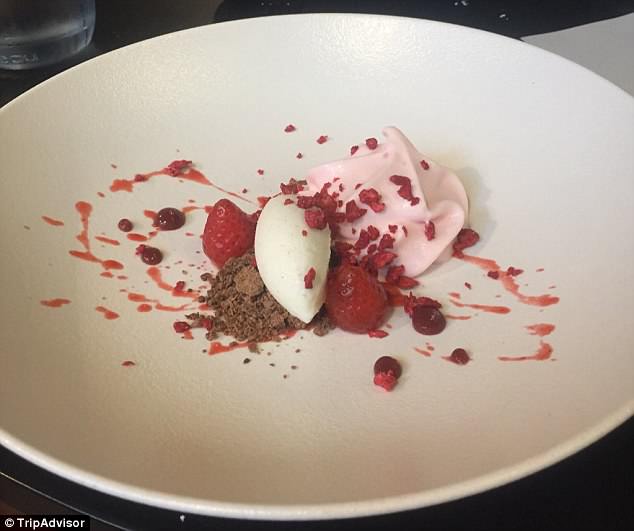 Writing under the name duckrabbit76, he said: ‘This is only the second occasion (in this country) I’ve had something on my plate which I thought had turned.

‘My wife and I felt pretty disappointed and would neither return nor recommend this restaurant.’

Mr Claridge defended his dishes, saying all food was prepared fresh on site every day and suggested his less experimental lunch menu may be more the the customer’s taste.

Diner David B wrote on TripAdvisor: ‘Taken here as a surprise. Certainly was. Not sure what the overall theme here is. 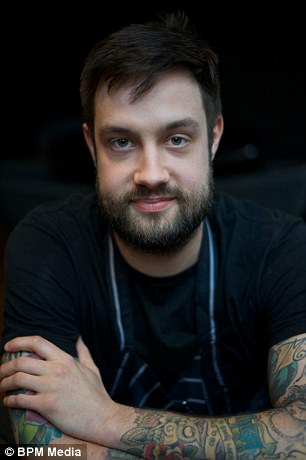 Mr Claridge defended his dishes, saying all food was prepared fresh on site every day

‘I suspect that the decor is on a limited budget. There is nothing special interior wise at all. Just very dark lighting. Staff here are doing a good job in helping to make the environment more acceptable but there is no getting away from the dour interior.’

Mr Claridge replied, saying: ‘For clarity, the theme of the restaurant is disappointment until July when the theme will change to mild disinterest.

‘This is the de rigueur for this sort of dining experience and restaurant and I am genuinely gutted (and puzzled) that whosoever bought you to my restaurant didn’t research a little more what we do and what that entails.

‘I always want my guests to have the best possible time, but we’re not for everyone and wouldn’t want to be.

Another reviewer wrote: ‘I get that it’s good to try to differentiate your product from others.

‘I understand the chef patron here wants to do it his way and to adopt things he likes. You just don’t feel this is anything special more strange than special.’

Again, Mr Claridge responded, saying: ‘Fair play. I wouldn’t know how to design or put together a restaurant that wasn’t to my taste, but I totally get that won’t be for everyone. 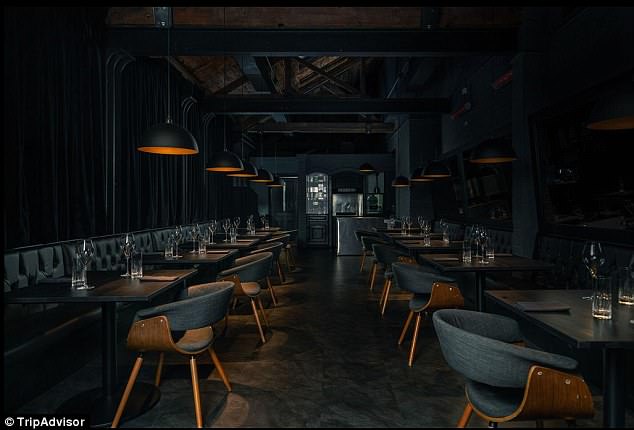 ‘Any readers can just review the past week of mischief of Tripadvisor to see how a bit of rock and roll music and a black dining room seems to polarise opinion but that’s alright, I reckon we’re all a bit different and other dining options are available.

‘It does make me a bit sad, but then I can’t please everyone. Finally, thank you for your parting epithet – more strange than special – which will now constitute my Tinder bio.’

The Wilderness was the 20th most popular restaurant in Birmingham on TripAdvisor at just after 9.30pm on Monday, May 14, 2018. But 87 per cent of ratings on the site gave the restaurant a maximum five stars.

Kevin W wrote: ‘This is without doubt one of the most interesting, exciting and welcoming restaurants we have ever visited.

‘Love the decor, very New York East side bar, great choice of music and all staff are so passionate about ensuring you have the best experience.

‘After having eaten in many fine dining and Michelin starred establishments I found the Wilderness to be as good or better but with a more relaxed and friendly atmosphere. 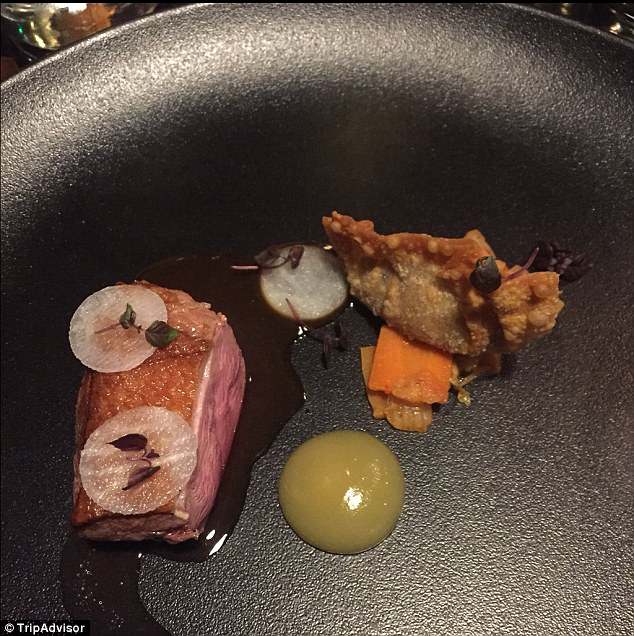 The Wilderness was the 20th most popular restaurant in Birmingham on TripAdvisor at just after 9.30pm on Monday, May 14, 2018. But 87 per cent of ratings on the site gave the restaurant a maximum five stars

‘To all the negative reviewers who complain about small portions, the colour scheme and a rock music soundtrack, please try the large mixed grill at Wetherspoons whilst listening to Abba.

‘Keep up the entertaining responses to all the people who don`t understand your concept!’

Mr Claridge said it was impossible to please everyone at a restaurant, and although the bad reviews had upset him, he was not going to change.

‘You can say it’s not for you, not for your taste, but you can’t say it’s terrible,’ he said. ‘It’s not terrible. These aren’t guests who say something is wrong at the time, they sit there and smile and say everything is great and then behind the anonymity of the internet they say bad stuff.