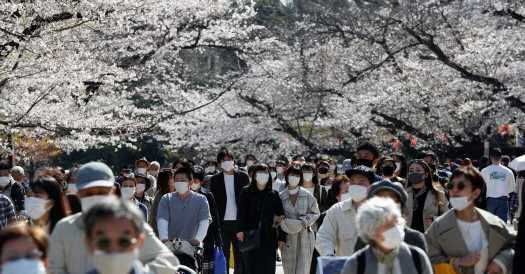 Japan’s world-famous cherry trees are expected to be in full bloom in most of the country this week, but once again the coronavirus pandemic will keep the usual crowds away.

Spring in Japan has long meant cherry blossoms, or sakura, with scores of picnickers welcoming the warmer weather over bento box lunches or barbecue as well as copious amounts of sake and other alcohol. But last spring, with the coronavirus spreading, officials were quick to curb cherry-blossom viewing despite its cultural significance. Yuriko Koike, the governor of Tokyo, compared the loss to “taking hugs away from Italians.”

Ms. Koike warned the public again last week not to have cherry-blossom parties, even though other restrictions were being loosened. On Sunday, the government lifted a state of emergency in Tokyo that had been in effect since early January, despite concerns that new case reports were still too high. Tokyo reported 337 new cases on Tuesday, about one-third of the daily average two months ago.

Other city officials have reinforced Ms. Koike’s message. In a video posted on YouTube last week, Eiji Aoki, the mayor of the Meguro ward, appeared at the Meguro River, which is known as one of the best spots for cherry blossoms, and held up a sign asking people to refrain from viewing the blossoms.

More than a dozen sakura festivals around Tokyo have been canceled; some locations are offering virtual tours instead. Nets, ropes and fences have been set up to thwart groups from gathering, and security guards will advise people to keep moving.

At Ueno Park, one of the most popular cherry-blossom destinations, the main path is divided into two lanes, and visitors can stroll in only one direction in each lane.

Shinjuku Gyoen National Garden, whose cherry blossoms would normally draw as many as 60,000 visitors a day, reopened on Tuesday. The park is allowing picnics of up to four people, or larger groups if all members live in the same household, but alcohol is prohibited.

Japan remains closed to foreign tourists, who would normally spend billions of dollars in the country during the cherry-blossom season.

On Saturday, organizers of the summer Olympic Games in Tokyo said spectators from overseas would not be allowed. The organizers have also set strict guidelines for the torch relay, which starts on Thursday. One of the guidelines asks spectators to clap rather than cheer as the torch passes by.