As soon as the hit Netflix series The Queen's Gambit made chess newly cool, texts started streaming in from Katrin Aladjova's mates.

As the fictional wunderkind Beth Harmon slew her way across the best boards of the US and Europe, leaving men many times her experience and age in her wake, Ms Aladjova's friends madly urged her to get onto it, as "it was like going through my life story". 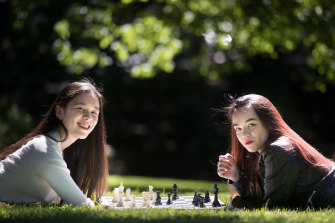 Jody Middleton and Cassandra Lim, chess champions, say the huge appeal of chess is showcased in ‘The Queens Gambit’ and it will elevate women’s participation.Credit:Jason South

The on-screen orphan, based on real-life child prodigy Bobby Fischer, was taught by a janitor at the age of nine while Ms Aladjova was tutored by her father from age six.

Just like Beth, as a 15-year-old, Katrin played and beat multiple men at once in the highly-complex exercise of "simultaneous" exhibition chess. She was even enlisted as a child to help promote chess by playing rows of men who sat at tables set up in Australian shopping centres. 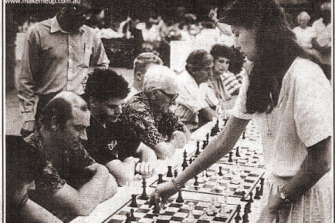 Katrin Aladjova, then 15, playing men in a ‘simultaneous’ chess game in a Brisbane shopping centre to help promote chess in the 1980s.

She sat among clouds of smoke like Beth did, because "when I grew up in the '70s and '80s smoking was allowed during the game; they touched on this topic in the movie and I had to laugh," says Ms Aladjova, now a businesswoman.

"I could not take a breath," she says of those hazy days, "chess was then considered a men's sport." 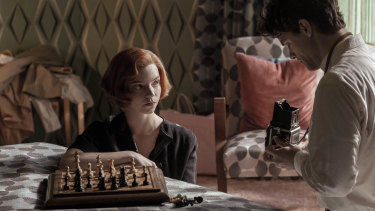 All of them, as well coach Dr Vanja Rozenblat (a psychologist and lecturer when she's not playing chess) and Chess Victoria president, Leonid Sandler, think it is time women gained a greater profile and the show could help.

Cassandra Lim is the highest ranked Australian woman under 30 and has represented the country international youth events. She will play Board One for Victoria in the national schools championships and compares creating a chess game that comes together to making a piece of art.

"Sometimes you mess it up and it's painful to look at, but when you come up with a plan and it works it can be a really beautiful thing," says Ms Lim, who just completed Year 11 at PLC. "In The Queen's Gambit, Harmon does say chess is beautiful and I agree."

Jody Middleton finds it "exhilarating". She is part of only "10 to 15" per cent of the junior competition community Mr Sandler estimates is made up of girls.

"It can be daunting for young girls in today's quite male-dominated society to go to a chess club and play against men, it's not easy but in the biggest Victorian chess club, in Box Hill, there are an amazing amount of girls playing very successfully and beating boys and adults," he says. 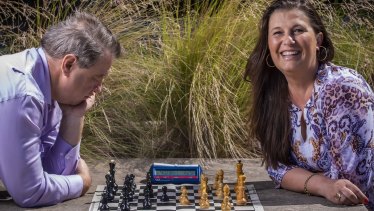 Ms Middleton will play Board Two for the Victorian girls team and says she is not daunted by the prospect of eventually playing "open" chess against all comers. She was taught to play at age five by her parents, loves the complexity and says it is deeply satisfying to learn even from losses.

"Obviously in the past its been quite patriarchal, things that are quite heavy-lifting mentally would be passed over to men, and obviously there's segregation between the men's section and the women's section – I'd prefer everything to be open so there's a sense of equality, but it comes with the customs of previous times," she says.

"Chess is a mental game so there shouldn't be that segregation, because obviously women have the same capability."

Chess has helped her learn memory techniques, improved her powers of logic and "enhanced me so much".

Ms Aladjova agrees: "Chess teachers you to analyse, to calculate, to see every situation in your life from different angles, it targets things in a completely different way."

Both women loved The Queen's Gambit, and complimented it, as other champions have, on the excellent authenticity of the play, for which former world champion Garry Kasparov was the consultant.

Says Jody Middleton: "I really loved the show and binged it in a day. It was very inspiring."

Coach Vanja Rozenblat says it will bring girls to the board. "If we think about role models, most of the world champions have all been male, and a lot of the most elite players are male. So maybe boys can see themselves at those high levels whereas girls don't get to," she says.

"[Beth, though fictional] is a really positive role model, to show girls they can really excel."

'The Queen's Gambit' is on Netflix.