Young children have been seen larking around perilously close to the edge of an unstable cliff in a bid to take selfies.

Despite a number of warnings, reckless daredevils are continuing to flock to the Beachy Head cliffs in East Sussex taking pictures.

The dangerous beauty spot has seen a number of cliff falls, prompting the Coastguard to warn tourists to avoid the area, adding that: ‘no selfie is worth risking your life for’.

Pictures taken today show a family dicing with death as children are seen excitedly bounding across the grassy surface. 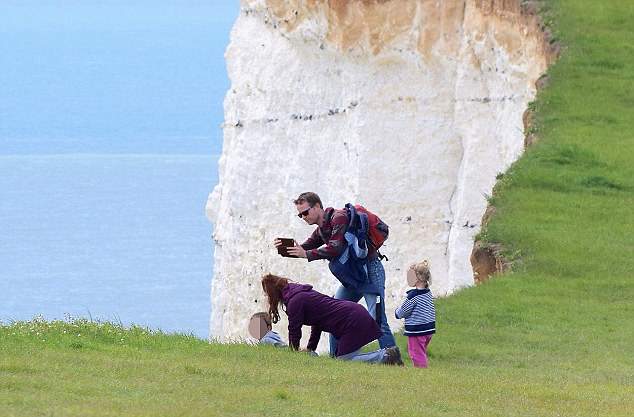 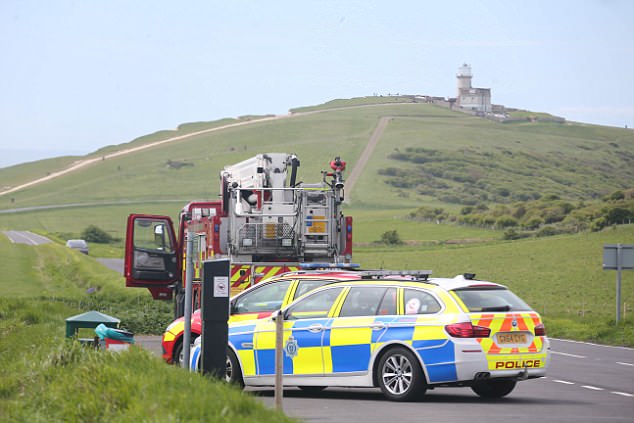 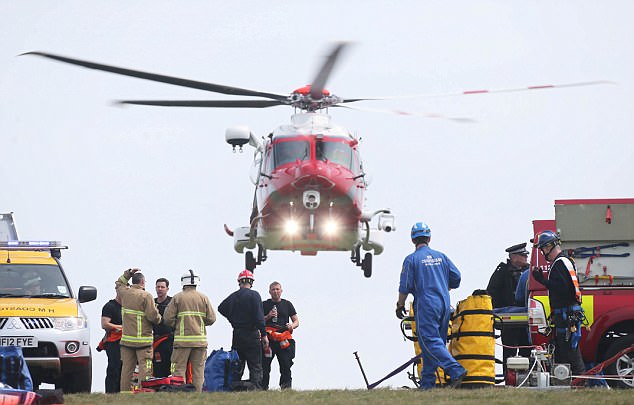 Coastguard, Sussex Police, the RNLI and East Sussex Fire and Rescue are on the scene after the car plunged over near the lighthouse

They peer over the edge of the cliff posing for a photo, completely oblivious to the danger that could come their way.

It was reported earlier today coastguards also recovered a body after a car was seen driving over Beachy Head cliff and plunging 531 feet.

Coastguard, Sussex Police, the RNLI and East Sussex Fire and Rescue were on the scene after the car went over the clifftop.

A spokesman for Sussex police said the car had been found and a recovery operation was underway.

In June 2016 some 50,000 tonnes of chalk gave way and collapsed into the sea at Birling Gap – part of Seven Sisters national park near Beachy Head – claiming the life of a woman in her 20s.

The cliffs at Seaford Head in East Sussex were hit by three unexpected collapses in just two days.

Rescuers found the body of a woman in her 20s who is believed to have fallen from a clifftop around the time of the dramatic rockfall.

However the scene of the collapses created a mini tourist boom in the East Sussex town with some sightseers admitting they travel long distances to view the spectacle. 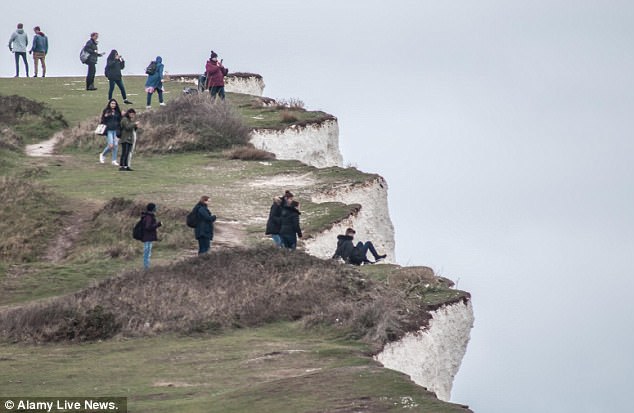 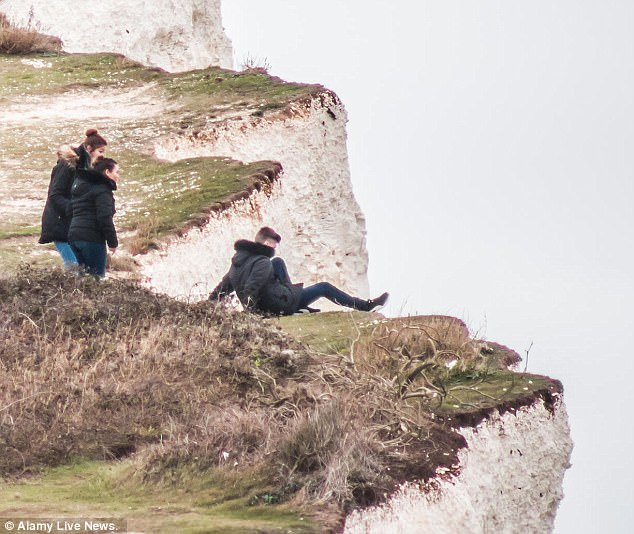 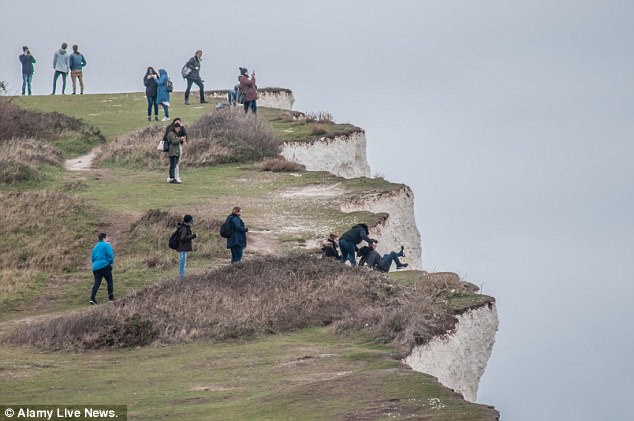 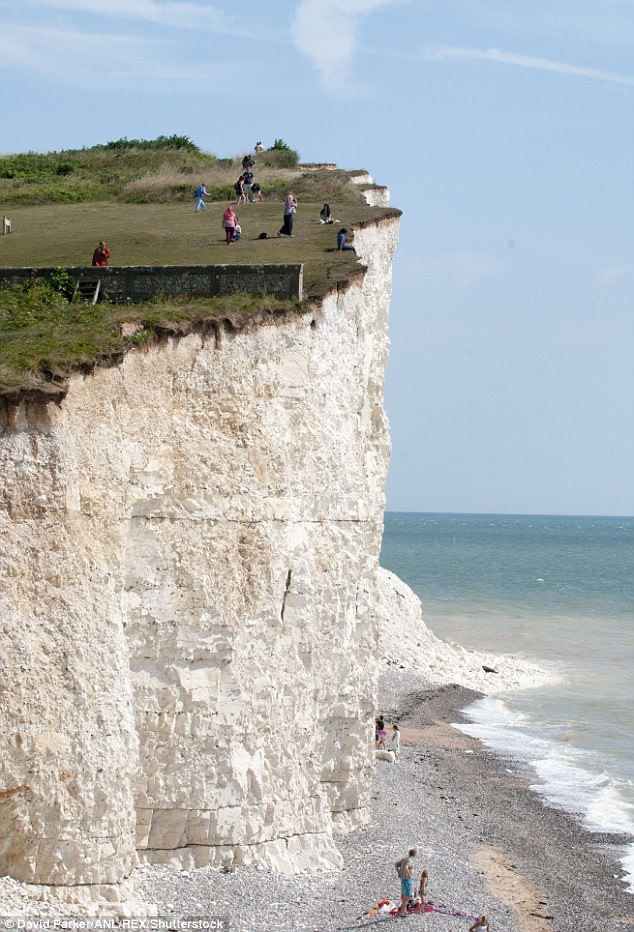 Long way down: Tourists messing around on cliff edges in East Sussex are being urged to take care

Thrill seekers have previously been spotted balancing precipitously on the edge of unstable cliffs in a bid to take selfies.

Youths seemed completely oblivious to the danger they were placing themselves in on top the famous Seven Sisters Cliffs, at Birling Gap, East Sussex last October.

One boy can be seen tempting fate even further by dangling his leg over the cliff before two friends edge closer to the sheer drop. 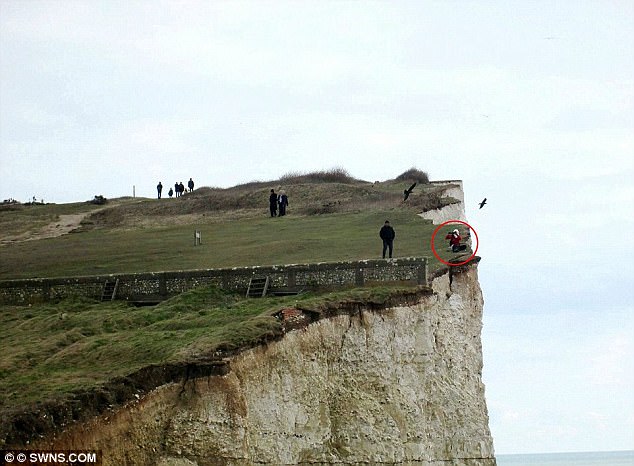 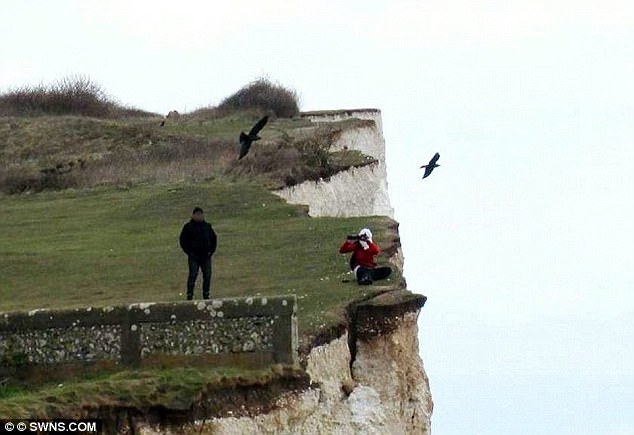 The woman, who was wearing a bright red jacket, was photographed by a passer-by at Birling Gap, near East Dean, East Sussex

WHY DO CLIFFS COLLAPSE?

Cliffs collapse for a range of reasons.

While the most common reason is weathering, there are other factors to consider, such as water crashing against the cliff face, what the cliff is made of, and the climate of the area.

For example, softer materials, such as clay are more likely to collapse than harder materials like granite.

Bad weather naturally erodes the foundations of a cliff, and can cause it to collapse.

One of the most common examples of weathering is when rain fall affects the composition of the cliff.

As rain falls, it seeps into the permeable gravel and soil at the top of the cliff, adding weight to it.

At the same time, colder winter temperatures can cause the face of this cliff to freeze, as frozen areas weaken as they thaw.

If a cliff is against a body of water, such as a sea or ocean, waves crashing on the cliff can also weaken it over time.

Cliffs can also collapse as the result of rock slides, when whole slabs of rock detach from an inclined face.

The cliffs appear to be a hot-spot for thrill seekers and numerous snaps of tourists putting their lives in danger for the sake of a selfie.

In October the steps leading down to the beach below the iconic chalk cliffs were closed due to a recent increase in cliff falls.

It was hoped the step leading down to the beach at Birling Gap, near Beachy Head – which were completed just four years ago – would provide access for the visitors for decades to come.

But a mixture of storms and high seas has seen several metres of the chalk face cliffs disappear beneath the waves.

Violent winter storms in 2013/14 is said to have caused seven years of erosion to take place in just three months.

The steps were closed to the public so they can be moved to a ‘safer anchorage’.

The cliffs at Birling Gap have experienced possibly the worst coastal erosion in the UK.

Over the years several cottages have disappeared as the cliffs have gradually been eroded.

It is hoped that once in their new position, the steps should not have to be replaced for up to ten more years.

Adrian Harrison, National Trust Lead Ranger said: ‘Here at Birling Gap we are face to face with the realities of coastal change. We are glad to have the support of Wealden District Council with this essential work on the steps, which will help to enable long term access to the beach.’

The National Trust looks after 775 miles of coastline around England, Wales and Northern Ireland.

More than 350,000 people visit the cliffs at Birling Gap and Seven Sisters cliffs each year.