Children are six times less likely to spread coronavirus than adults, a study has claimed as children in England return to school today.

The research tracked how the coronavirus spread in a group of 1,900 people, mostly children, who spent five weeks at summer camps in Spain.

They were mixing in similar situations to schoosl but spent most of their time outdoors and not in a classroom, the researchers in Barcelona said.

Swab testing every week found 30 infected children passed the virus on to just 12 others, despite having more than 250 close contacts in their ‘bubble’.

The children’s R rate – the number of people an infected person transmits the virus to – was 0.3. In comparison, the R rate of the local area was 1.7 to 2, meaning the children were six times less infectious than the general population.

The findings boost the case for re-opening schools in the wake of the Covid-19 pandemic after a furious battle about whether it is safe.

A swathe have studies have found children do not spread the virus as much as feared – scientists initially assumed they would be ‘super-spreaders’ like they tend to be with colds and flu.

Another recent study found that no previously-healthy children have died of Covid-19 in the UK.

Teachers’ unions have concerns that children will bring the virus home to possibly vulnerable family members.

But studies, now including this one, suggest they do not actually pass the virus on to that many close contacts the way adults do. 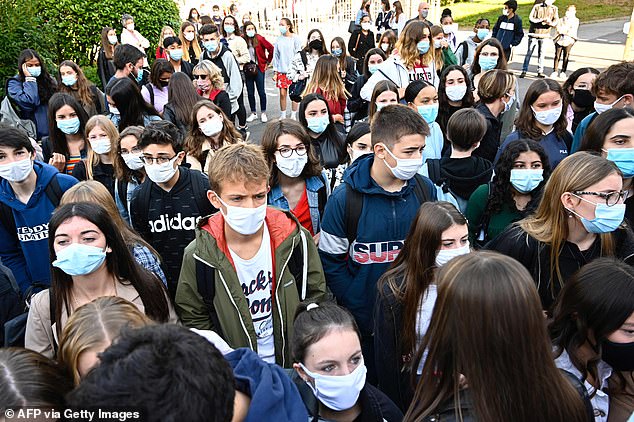 The study was run by the Sant Joan de Déu Barcelona Children’s Hospital and spanned over five weeks.

Researchers looked at 1,905 people who have taken part in activities in a school-like environment at 22 summer camps across Barcelona.

NO HEALTHY CHILDREN HAVE DIED OF COVID-19

Healthy children do not die of coronavirus and only those who were seriously ill before they caught the disease are at risk, a major government-funded study has confirmed.

No healthy child has died of the virus yet in the UK, researchers said.

Six children have died but all had other serious health problems such as cancer or cerebral palsy when they were struck down by Covid-19.

Research found that the risk to children is ‘strikingly low’, only a tiny proportion of them end up in hospital and deaths are ‘exceptionally rare’.

Six children under the age of 15 have died of coronavirus in England and Wales since the start of the pandemic, along with nine 15 to 19-year-olds. This compares with 52,082 victims in all other age groups up to August 14, according to the Office for National Statistics.

Scientists led by the University of Liverpool found that one per cent of hospitalised children died, compared to a significantly higher 27 per cent of adults. This means that while one in four adults who ended up in hospital with Covid-19 died of it, only one in 100 children did.

The research was published in the prestigious British Medical Journal on August 27.

There were basic risk containment measures that will be commonplace in schools globally – frequent hand washing, small bubble groups, and face mask wearing.

‘Every week a group of hospital personnel would travel to the camp and take saliva samples for a PCR test,’ Juanjo García, the head of pediatrics at the hospital, told The Times.

The PCR test is used in the UK and US for most Covid-19 testing. A machine looks at a swab sample for the presence of the virus and reveals if someone is currently infected.

Over the five weeks, the research project identified a total of 39 ‘patient zeros’ – formally known as index cases. These were 30 children and nine monitors.

The 30 paediatric cases came into contact with 253 children during the camps belonging to their bubble group.

Twelve were infected, known as secondary cases, an attack rate of 4.7 per cent.

This gives the children an R rate of 0.3 – almost six times lower than that of the general population at the time of the study (1.7 to 2) in the areas where the camps were held.

Most of the paediatric index cases (22) detected did not transmit any infection in the camps, a press release says.

Five index cases transmitted the infection to one contact, two to two contacts and one to three contacts – revealing that individuals are not equally contagious.

The younger children under 12 years old spread the coronavirus at a similar rate to older children, aged between 13 and 17 years old.

The findings give hope that schools will not be the source of Covid-19 outbreaks because spread is not more likely to occur there.

However, there were some limitations to the study, including that activities typically took place outdoors, where the coronavirus is less likely to spread, rather than in classrooms.

Antibody testing, which can tell if someone has previously been infected, may reveal more Covid-19 cases that were not detected in the short follow-up period.

The study regularly screened all participants for the virus, a tool which will not be available to schools in the UK.

It helps to find those who do not show symptoms, called asymptomatic, and isolate them before they can pass the virus on to anyone else.

In the real world, people without symptoms do not come forward for testing, and are considered the most challenging part of stopping the coronavirus.

The findings come as millions of children in England return to school today, some for the first time since March.

But there will be strict new guidelines to get used to, varying between schools, including no joking about the coronavirus.

Students will be kept in ‘bubbles’ of classes or entire year groups, meaning that if one person tests positive, the whole year group must go home and isolate just in case.

To enforce the bubbles, there will be staggered break times and travel through hallways between classes.

Parents will face fines if they do not send their children back this week, its been revealed, but The Department for Education (DfE) said the £120 bill will only be used as a ‘last resort’.

But a number of studies should give reassurance that children are not likely to get seriously ill with Covid-19. They are also thought to transmit the virus less than adults, but its difficult to study this and the evidence is not so clear-cut.

Shamez Ladhani, a paediatric infectious diseases specialist at Public Health England (PHE), said that school staff will maintain social distancing rules during work but are more likely to break them outside the classroom.

Just one in 10,000 schools have been hit by a virus outbreak since they reopened in June. Separate analysis revealed only one in 23,000 children were infected.