Children in Transformer robot costumes morph into a truck, muscle car and jet plane as they show off their incredible super hero moves

Three children showed off their super hero moves while dressed as their favourite characters from the Transformer franchise.

Each is wearing an outfit of a different robot from the super hero series and the kids strike bold poses as they emulate the fictional space warriors on a pavement in the US.

In the adorable video the first child is dressed in blue and red as Optimus Prime – the programme’s protagonist and hero who is capable of turning into a Freightliner FL86 truck.

The second child, dressed as Superion Maximus – a robot who turns into a jet plane – struts around to the right.

A third child is dressed as Bumblebee, a small yellow Autobot who can change into a Chevrolet muscle car.

A cameraman snaps away at the kids, who appear to be having a huge amount of fun in their costumes.

The already impressive outfits only get better as the video goes on. 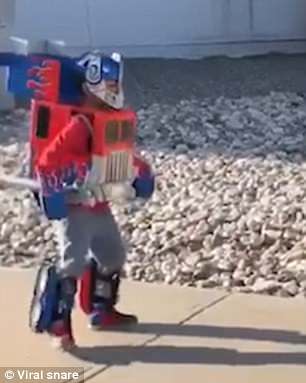 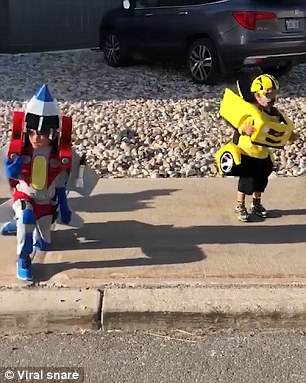 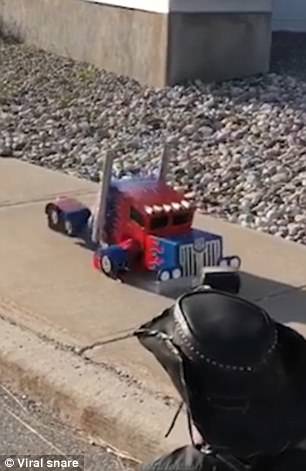 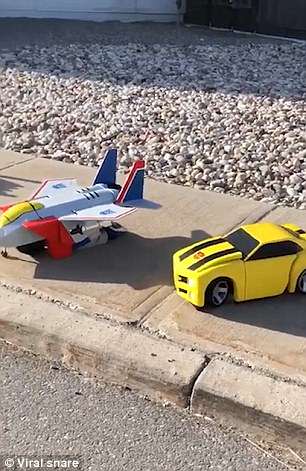 As the cameraman snaps away the children activate their outfits and turn their robots into a truck, jet plane and muscle car

On command, the children activate their costumes which transform into their robots’ vehicle of choice.

Lying down on the pavement, the three children suddenly resemble tiny vehicles.

The resemblance is uncanny and the amazed father who is filming gasps as he looks on, saying: ‘That’s so cool. That’s amazing’.

The Transformers film franchise is the 11th-highest-grossing film series ever – making an impressive £3.2billion so far with more films planned.