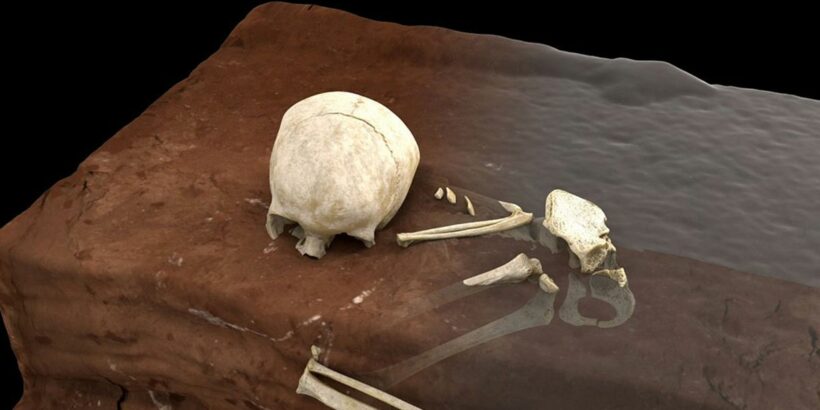 The body of a young child buried some 78,000 years has been confirmed as the earliest known deliberate burial of a human being in Africa.

The child, who would have been two or three years old when they died, appears to have been wrapped in a shroud and given a pillow for their head before being placed in a shallow circular pit dug into the floor of a cave in eastern Kenya.

The half-mile-long Panga ya Saidi cave network has been a treasure trove for archaeologists, who say the caves were used for centuries.

Some parts of the bones belonging to the child – named 'Mtoto' by archaeologists, meaning 'child' in Swahili – were first found during excavations at Panga ya Saidi in 2013. However, it wasn't until 2017 that the small pit feature containing the bones was fully exposed.

Dr Emmanuel Ndiema, of the National Museums of Kenya, said: "The bones were just too delicate to study in the field.

"So we had a find that we were pretty excited about – but it would be a while before we understood its importance."

Once safely covered in plaster, the cast remains were taken to the National Museum in Nairobi and later to the laboratories of the National Research Centre on Human Evolution (CENIEH) in Spain for further excavation, specialised treatment and analysis.

Two teeth, exposed during initial lab excavation of the sediment block, led the researchers to suspect that the remains could be human. Later work at CENIEH confirmed that the teeth belonged to a two-and-a-half to three-year-old human child.

Over several months of "painstaking" excavation in CENIEH's labs, further groundbreaking discoveries were made.

Professor María Martinón-Torres, director at CENIEH, said the child's jaw was intact and their adult teeth were still in place, waiting to come through.

"The articulation of the spine and the ribs was also astonishingly preserved," she said, "even conserving the curvature of the thorax cage, suggesting that it was an undisturbed burial and that the decomposition of the body took place right in the pit where the bones were found."

Microscopic analysis of the bones and surrounding soil confirmed that the body was rapidly covered after burial and that decomposition took place in the pit. In other words, Mtoto was deliberately buried shortly after death.

Researchers further suggested that Mtoto's flexed body, found lying on the right side with knees drawn toward the chest, represents a 'tightly shrouded burial' with deliberate preparation.

Even more remarkable, according to Prof. Martinón-Torres, was that "the position and collapse of the head in the pit suggested that a perishable support may have been present, such as a pillow, indicating that the community may have undertaken some form of funerary rite."

Though the Panga ya Saidi find represents the earliest evidence of intentional burial in Africa, burials of Neanderthals and modern humans in Eurasia date back as far as 120,000 years and include adults and a high proportion of children.

Professor Michael Petraglia, of the Max Planck Institute, added: "The Panga ya Saidi burial shows that inhumation of the dead is a cultural practice shared by Homo sapiens and Neanderthals.

"This find opens up questions about the origin and evolution of mortuary practices between two closely related human species, and the degree to which our behaviours and emotions differ from one another.”