Santiago: Chile's capital Santiago has been singed by fire. In riots sparked by anger over fare hikes, masked and hooded protesters have torched buses, metro stations, supermarkets, banks and the high-rise headquarters of a major energy firm.

Around the city, flames and smoke mixed with tear gas and water cannon spray as armed forces mobilised on the streets for the first time in almost 30 years in a country that still shudders at the memory of military rule. 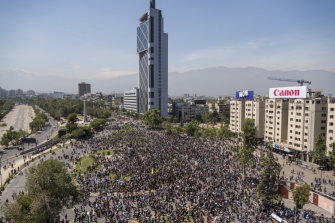 Demonstrators are seen in an aerial photograph taken above Plaza Italia during a protest in Santiago.Credit:Bloomberg

Amid the looting, arson and clashes, thousands of residents of rich and poor neighbourhoods alike also took to the streets to express a more widespread discontent over rising living costs and patchy public services that is boiling beneath the surface of one of South American's wealthiest and most liberal economies.

The demonstrations spread around the country over the weekend, and there was little sign of tempers cooling.

"This is not a simple protest over the rise of metro fares, this is an outpouring for years of oppression that have hit mainly the poorest," Karina Sepulveda, an anthropology student, told Reuters at a protest in central Santiago on Sunday as she banged a frying pan with a wooden spoon. 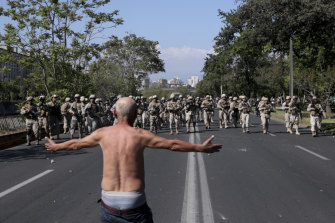 A man challenges soldiers during clashes in Santiago, Chile.Credit:AP

"The illusion of the model Chile is over. Low wages, lack of healthcare and bad pensions have made people tired."

Moments later, she was engulfed in a cloud of tear gas fired by nearby police.

After dramatic scenes on Saturday, the streets of Santiago had been quieter on Sunday morning. But protesters soon returned to clash with police amid smouldering hulks of burned out buses and cars. 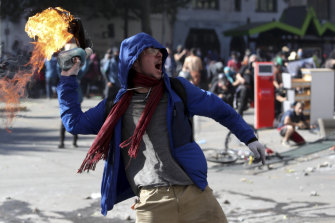 An anti-government protester throws a firebomb at police amid a march by students and union members in Santiago, Chile on Monday.Credit:AP

Roads in the gentile, tree-lined downtown area were pocked with stones and rubbish from protests the day before, as residents ventured out to find the few open shops. Some joined spontaneous protests on street corners, banging cooking pots and shouting slogans against police repression.

Armoured personnel carriers drove slowly through the streets with heavily-armed troops in camouflage peering out from inside.

"I have already lived this, seeing soldiers on the streets sends shivers down my spine, it's like going back to 1973," said Carmen Araya, 74, referring to the year the military dictator Augusto Pinochet seized control of Chile by force. 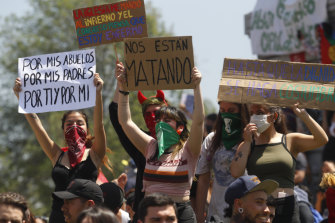 Demonstrators display flags and banners during a protest.Credit:Getty Images

The riots grew last week as police came out to stop mass fare evasions after an announcement on October 6 that bus and metro fares would be hiked by between $0.04 and $0.1.

On Friday, as the evening commute home approached for millions, some protesters lit fires at metro stations, ransacked shops, burned a bus and vandalised train station turnstiles, forcing the metro network to be shut down.

The 18-storey city centre headquarters of energy firm Enel was set alight, rapidly turning into a towering inferno as flames licked the outside of the building. Enel said all workers had been safely evacuated.

President of Chile Sebastian Pinera, who was photographed in an upmarket Italian restaurant as the fires raged, returned to La Moneda presidential palace for crisis talks with his ministers and emerged, shortly after midnight, to announce the first state of emergency in Santiago since Pinochet's dictatorship.

By Saturday lunchtime the usual weekend noises of the city – dogs barking, jovial barbecues and Latin pop – was replaced by the clatter of military helicopters, the banging of pots and pans, and the sirens of police and fire engines.

Buses were torched and the public transport system was shut down entirely.

In the port city of Valparaiso, the offices of the Mercurio newspaper, the country's oldest, were torched. 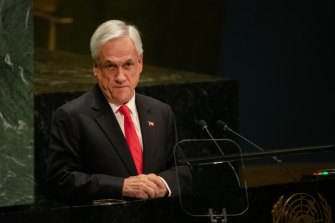 With police and soldiers fighting running battles with protesters in Santiago and elsewhere in the country as night fell again, Pinera appeared on national television to announce a freeze of the transport price hikes.

The general placed in charge of Santiago's security then announced a curfew, urging people to return to look after their homes and families.

On Sunday, school for the start of the week was cancelled along with scores of flights in and out of the city. The army confirmed it shot and injured two people while chasing looters. At least three more died in supermarkets set on fire.

The unrest threatens to cast a shadow over the city's hosting of world leaders, including US President Donald Trump and Chinese leader Xi Jinping, for the annual APEC counties summit on November 16-17. Trump has said a trade deal between Beijing and Washington could be signed in Santiago. 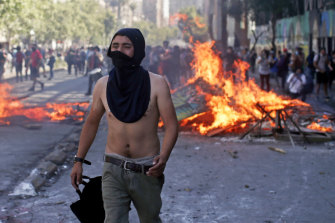 A masked protester walks near a burning barricade during clashes with police in Santiago.Credit:AP

Guillermo Holzmann, political analyst at the University of Valparaíso, told Reuters if Pinera's government could not win protesters over with a promised working party set up to examine the issues that drove them onto the streets, APEC could see fewer senior attendees.

"We could end up seeing a rather intermediate-level meeting and not what was expected, which was Donald Trump signing a historic deal," Holzmann said.

Around Santiago, meanwhile, people were stunned by the chaos.

Francisca Astudillo, 27, a supermarket worker and mother of two, said she sympathised with the protesters, and that the political elite had no idea how hard life was for normal people, but she wanted the violence to stop.

"It's the people turning on the people and that's not right," she said. "It's got out of control."