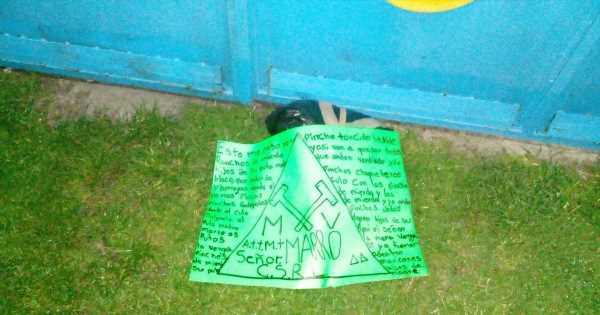 A chilling video has emerged of a Mexican drug cartel interrogating a bloodied police officer before he was chopped up and scattered across different parts of a city.

Hitmen from the Santa Rosa de Lima Cartel, a relatively small trafficking organisation with influence in the Mexican state of Guanajuato, were seen grilling the cop over his ties to a rival group, the Jalisco New Generation Cartel (CJNG).

In the clip, translated by Borderland Beat, he identifies himself as a federal officer who hands over "rent" (a cartel bribe) to more senior officers.

READ MORE: Man jailed for cocaine shipment worth £30m sent to him from Mexican cartel When asked how he is involved, he says: "I work for them [the CJNG]. We move the patrol vehicles so that others can come through easily."

He also identifies himself as the person who collects "extortions" and passes them to "the Secretary and Director", admitting that he hands over roughly one million pesos (£41,890) to his superiors every month.

When asked what else he does, he explains: "It was us who released the Jalisco gunmen that were driving a red Camaro here recently.

"We’re the ones who open the road whenever they raid the targeted homes. Our armaments are used in these affairs. We sell the drugs, the cocaine. "We look to find who sells it. So that we can hand it over to the Secretary. We’re the ones who decide which houses will be raided."

He adds that he also hands seized drugs and guns over to the CJNG.

The video emerged after dismembered body parts were found in four parts of Celaya, a town in Guanajuato.

According to Borderland Beat, they were what was left of this police officer.

A narco message was found alongside one of the gruesome packages, warning others who "sell out" of the same fate. It read: "Every son of a b*tch who continues to sell white crystal meth will also end like this. This also applies to the jerk off sheeple who are giving their asses away with those skinny piece of sh*t b*tches.

"Along with those f**king federal agents who have sold their asses out. You f**king f**got sons of b*tches need to come on out for that armed confrontation.