Ronnakorn Romruen, 24, allegedly asked Miriam Beelte, 26, for sex as she was riding a motorbike on the Thai island of Koh Si Chang on Sunday night.

But when Ms Beelte spurned his advances, meth-crazed Romruen is said to have trailed her to the remote Phra Chulachomkla stone palace.

She can be seen wearing a blue dress and flip flops as she climbs a stone path to the summit of the peak, oblivious to the fact she was not alone.

A man carrying a ring of marigolds can be seen close behind, wearing a black top and army camouflage trousers. 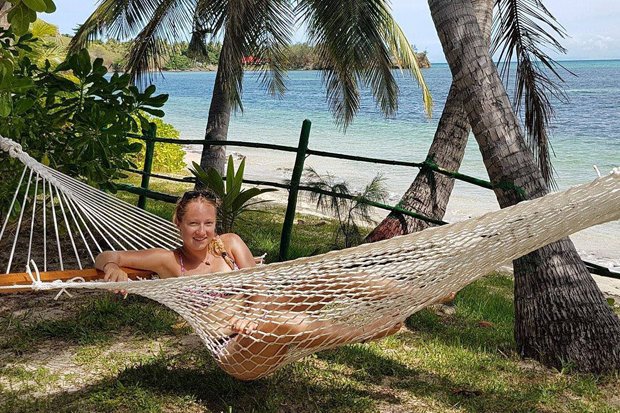 Romruen said he dragged Miriam’s body further up the hillside before throwing it in between a pile of rocks and disguising it with leaves.

He threw her underwear around 10 metres away from where her body was left.

Romruen then returned home and washed his clothes before watching TV and smoking.

But he was caught after cops quizzed the flower seller, who told them he had came back down from the mountainside covered in blood.

Police Colonel Angkul Sarakul who is leading the case said that Romruen performed the crime re-enactment at the scene today and would be sent to court later this week.

He said: “The killer has been detained at the police station and will appear at Chonburi Provincial Court.

“He has confessed to raping the tourist then killing her and trying to hide the body.

“He said he had taken methamphetamine before killing her.”