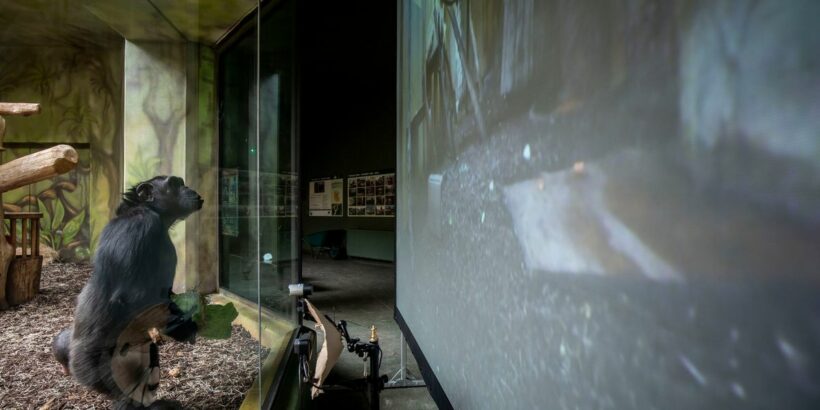 Chimps at two zoos are watching an ape-version of Big Brother on Zoom like "live sport events" during lockdown.

Czech zookeepers say the simians have been enthralled with a live video-feed of the other troop in the absence of human visitors.

Gabriela Linhartova, ape keeper at Dvur Kralove safari park, said: “At the beginning they approached the screen with defensive or threatening gestures, there was interaction.

“It has since moved into the mode of ‘I am in the movies’ or ‘I am watching TV’.

"When they see some tense situations, it gets them up off the couch, like us when we watch a live sport event.”

The video conferences are also being aired on the safari park’s website.

There are no mute button disasters as the sound is off.

But there has already been plenty of interest in what the distant cousins are up to since the project got under way last week.

The apes have also adopted other human behaviours such as grabbing goodies like nuts to chew on while watching the action.

The chimps at Safari Park Dvur Kralove and the troop 93 miles away at a zoo in Brno will enjoy daily 8am to 4pm Zoom calls until the end of the month.

The project could be extended beyond that date when keepers will decide if they should continue.

It comes after the first orangutan to get open-heart surgery in the world was given a Covid jab following an outbreak at a zoo in California, US.

Karen was among four orangutans and five bonobos who were inoculated after eight coughing gorillas tested positive for the virus.

The experimental animal vaccine had only been tested on cats and dogs and could be used on the zoo's lions and tigers next.

San Diego Zoo's chief conservation and wildlife health officer, Nadine Lamberski said that there have been no adverse reactions to the jabs and the apes are doing well.

She told National Geographic: "We commonly use vaccines designed with dogs and cats for lions and tigers.

"It's not like we randomly grab a vaccine and give it to a novel species.

Animal vaccines are commonly used across species as they are designed to target specific germs rather than specific creatures.

But the risk of adverse effects was still a worry as Ms Lamberski added the process had happened exceptionally quickly.

She said: "This isn't the norm.

"In my career, I haven't had access to an experimental vaccine this early in the process and haven't had such an overwhelming desire to want to use one."