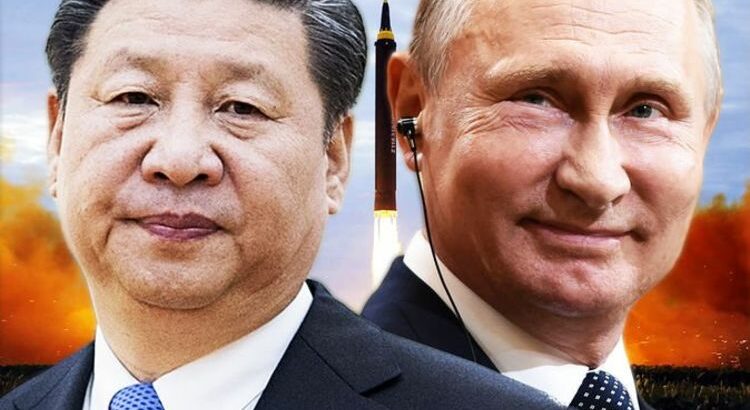 China and Russia is a 'challenge' for UK says Tobias Ellwood

Tory MP and Chair of the House of Commons Defence Select Committee, Tobias Ellwood, warned that China and Russia teaming up could be a big challenge for the West. During an interview with Express.co.uk, he claimed this support could result in China becoming more confident. Through this confidence, they may become more aggressive and emboldened to invade other smaller nations in makes claims to.

Mr Ellwood highlighted that the West would need to quickly decide how it would deal with China as it attempts to widen its influence.

Mr Ellwood said: “This is the real test for the West, if it gets to that point of military conflict.

“Context where China’s military advance has gone, they now have the biggest armed force, by their numbers certainly.

“Their Navy grows the size of the UK’s Navy every single year.

DON’T MISS: World holds breath as US ship ‘hijacked’ off coast of UAE

“They are developing a fifth-generation fast jet and are building aircraft carriers as well.

“They are also teaming up with Russia which in itself is another sideshow in the challenge that we face.”

Mr Ellwood went into greater detail of what a Russia and China team-up could mean for the West.

He said: “This team-up has given China the authority, the confidence to start establishing their own standards and rules, not least the Nine Dotted Lines in the South China Sea.

“They have been making claims over the Spratly Islands and other territories for example.

“Though China’s very powerful soft power influence, it is seeking deals across the world where it is able to place its military way beyond its shores.

“Djibouti is a great example of that, Shri-Lanka as well, we now also have Mombasa off Kenya.

“These are all where expensive trade deals, China’s one belt one road programmes have failed to be honoured.

“The way China is able to leverage the debt that is owed to them is to strike deals to allow the advance of their military capabilities.”

Russian troops arrived in China earlier this week as the two nations plan on holding strategic military drills for the first time.

The exercises are said to safeguard regional security and stability as well as securing the good relationship between Beijing and Moscow.

The drills are planned to run for five days, taking place from August 9 to 13.