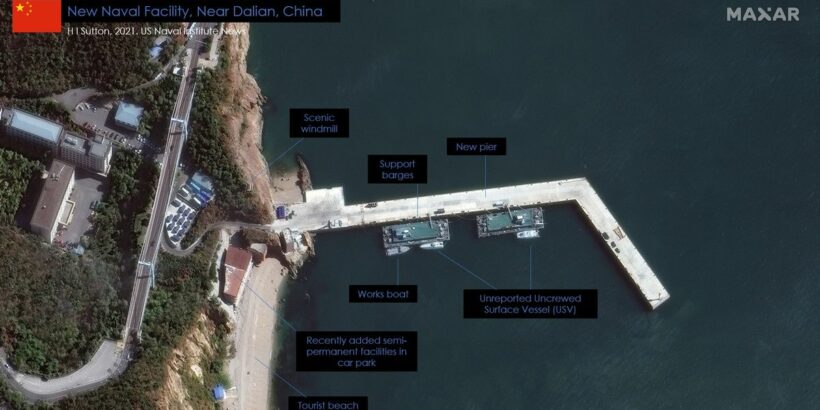 The pier, which is located just nine miles from the Xiaopingdao naval base, is reportedly used "intermittently" by the People's Liberation Army Navy and once housed submarines, including the Type-035 Ming Class boat.

The China State Shipbuilding Corporation built their JARI USV "mini-destroyer" fleet in 2018 and reportedly stores them at a secluded pier at Dalian, according to UNSI News.

A JARI is a small 50 foot-long craft with remote weapons that can fire surface-to-air missiles and lightweight torpedos using phased-array radars, electro-optical devices and sonar.

However, the latest model is estimated to be around 20 feet bigger with a more substantial "superstructure" for sharper configuration.

Experts claim the communist nation is also hiding another secret warship at the newly-built site, which was constructed in 2017.

The news comes as tensions between China and Taiwan following the threat of a high-tech war as the Chinese have vowed to unify the countries by force.

Fears China will start World War Three have been mounting since China has sent bombers into Taiwan air space in what was called an 'invasion war game.'

The Chinese military incursion on Sunday involved 10 J-16 and four Su-30 fighter jets, an anti-submarine aircraft, and four H-6 bombers, which can carry nuclear weapons, according to Taiwan's Defence Ministry.

The Chinese aircraft flew in an area closer to the coast of China, roughly northeast of the island of Pratas, according to a map provided by the ministry.