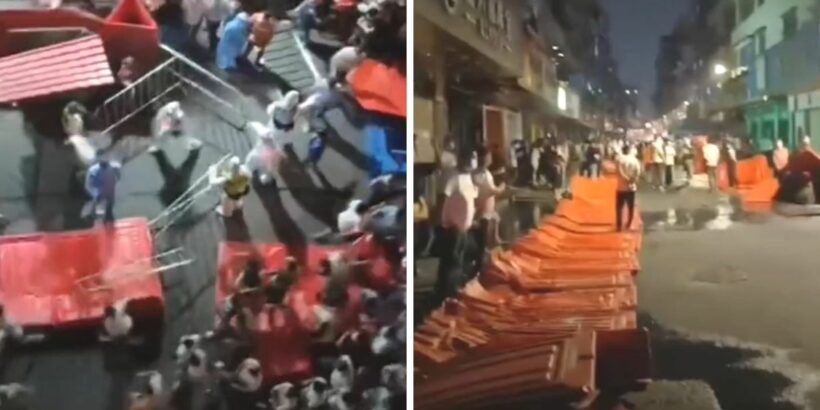 Residents in the southern district of Guangzhou have erupted in violent protest against the Chinese government’s intense Covid control policy. Video footage has captured the moment infuriated civilians reached breaking point over China’s zero-Covid approach. Protesters tore down fencing that had encased residential buildings and clashed with police units that arrived on the scene. The news comes as the Chinese government has been pressured to ease restrictions amid public backlash and worsening economic conditions.

A video published by DW News captured huge crowds of protesters as they broke through government-installed lockdown barriers.

DW News reported: “Crowds in China clashed with authorities and toppled a police vehicle in a rare show of unrest against the government’s zero-Covid policy.

“Viral videos appear to show many residents escaping a mandatory lockdown by knocking quarantine barriers down.

“According to authorities, the city is currently in the midst of a Covid outbreak, just as other cities in China have loosened testing requirements. The lockdown was planned to end on Sunday, but it was extended without explanation.”

In the clip, a group of angered residents flipped a police car onto its side while others stormed through fencing.

Government officials dressed in PPE were quickly overwhelmed by the crowd as protesters flooded down the street.

The Guangzhou region had been placed under lockdown following its worst Covid outbreak since the pandemic began.

Tensions within the area had been building for some time as residents had complained of wage losses and food shortages.

Footage released by the BBC showed a huge police presence had arrived on the scene in a bid to suppress the protests.

Chinese news reports have described Guangzhou as the “new epicentre” of the coronavirus spread.

In response, nine localities within Guangzhou had been placed under lockdown, including the Haizhu district which is home to many poorer migrant workers.

On Wednesday, restrictions in Haizhu were extended as Covid cases continued to emerge at a concerning rate.

Guangzhou has recorded more than 5,000 new cases emerging in a single day as the virus continues to spread to densely populated regions.

The district’s residents had complained they would not be paid if they failed to show up for work, which is believed to have been a key motivating factor behind the unrest.