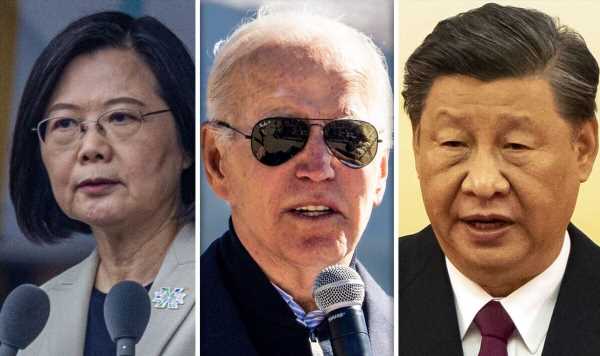 China is preparing to blame US provocations for any aggression with Taiwan, according to diplomats. Under the “one China” principle, Beijing claims Taiwan is an “inalienable part of the Chinese territory”.

The US acknowledges Beijing’s claims to Taiwan without recognising the island under their “one China” policy, but Washington has been vocal in support of Taipei’s independence and has sent officials to the island.

A Western diplomat has now claimed that Chinese ambassadors are portraying the US as a “provocateur” which now stokes Taiwan’s “separatist fantasies”, according to a report in The Economist.

They said Beijing is attempting to convince leaders in Asia the US is stirring up tensions around Taiwan, which could see the US blamed if China takes aggressive military action in the strait.

Another diplomat said China does not need to win every argument, saying: “Sowing confusion will do.”

The diplomat then suggested many Asian governments would “struggle to craft coherent responses to a Chinese attack on Taiwan”.

It comes after the US Senate included much of the “Taiwan Policy Act of 2022” in the $817 billion National Defence Authorisation Act, with debate on the bill beginning on Tuesday.

It was not immediately clear which Taiwan provisions would make it into the final version of the NDAA, but senators and Senate aides previously said most of it would likely become law.

The bill includes $6.5 billion in grant assistance over five years to bolster Taiwan’s military capabilities, and authorises up to $2 billion in loans.

The bill also takes steps to track and expedite delivery of military equipment to Taiwan, and lays out specific sanctions for the president to impose in the event of “significant escalation in aggression” against Taiwan by China.

US Foreign Relations Republican Jim Risch of Idaho said the inclusion of foreign military financing in the defence bill was vital.

He told Politico: “We must get ahead of a future crisis and give Xi Jinping reasons to think twice about invading or coercing Taiwan.

“That’s a key reason to push for more FMF and to expand training for the Taiwanese military ahead of any possible conflict.”

On Monday, Taiwanese President Tsai Ing-wen insisted in her national day speech that war with China is “absolutely not an option”.

She pledged to boost the island’s defences and reiterated her willingness to talk to Beijing. Ms Tsai shared how Taiwan is ramping up production of precision missiles and high-performance naval vessels, and is working to acquire small, highly mobile weapons.

Ms Tsai said: “I want to make clear to the Beijing authorities that armed confrontation is absolutely not an option for our two sides.

“Only by respecting the commitment of the Taiwanese people to our sovereignty, democracy, and freedom can there be a foundation for resuming constructive interaction across the Taiwan Strait.”