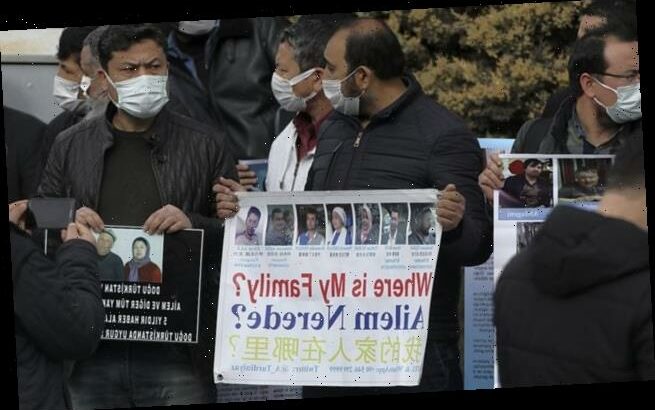 China is trying to ‘destroy’ the Uighurs and has broken every rule in the convention against genocide, independent report says

China has violated every rule in the UN’s genocide convention as it tries to ‘destroy’ Uighur Muslims, a think tank has claimed.

Beijing’s use of ‘re-education’ camps, mass imprisonment, forced sterilization, rape, and transfer of Uighur children to state institutions violate all five definitions of genocide laid out by the UN, the Newlines Institute for Strategy and Policy says.

China ‘bears state responsibility for an ongoing genocide against the Uighurs,’ researchers conclude in a paper published on Monday.

Beijing has vehemently denied all claims of genocide in its western Xinjiang province, calling reports ‘preposterous’ and ‘a total lie’. 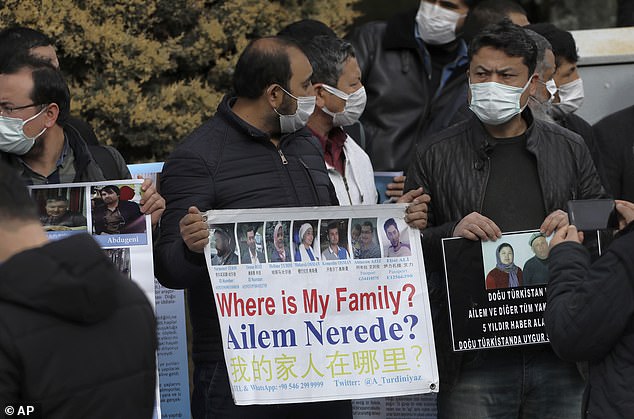 China has breached every article of the UN’s convention on genocide and is trying to ‘destroy’ the Uighurs, an independent report has concluded (file image, Uighur protesters in Turkey)

As part of the 55-page report, researchers examined China’s official statements and reports from within the country against the UN’s definition of genocide included in the Genocide Convention, which China has signed up to.

The convention states that genocide has been committed if any one of five conditions are met, within the context of a wider ‘intent to destroy, in whole or in part, a national, ethnical, racial or religious group’.

Breaching any one of the conditions is enough to make a country guilty of genocide, the convention says, but researchers argue that China is guilty of all five.

Researchers say Xi Jinping’s statement in 2014 that China plans to wage a ‘people’s war on terror’ in Xinjiang province kick-started the campaign against the Uighurs.

They say officials then made comments such as ’round up everyone,’ ‘wipe them out completely’ and ‘break their lineage, break their roots, break their connections, and break their origins’ which shows an attempt to destroy the group.

Reports of mass deaths in detention camps along with the targeting of elder members of Uighur communities with death sentences or long-term imprisonment fits the definition of killing members of the group.

The paper adds that ‘authorities systematically target Uighurs of childbearing years, household heads, and community leaders for detention in unlivable conditions, impose birth-prevention measures on Uighur women, separate Uighur children from their parents, and transfer Uighurs on a mass scale into forced hard labor schemes in a manner that parallels the mass internment. 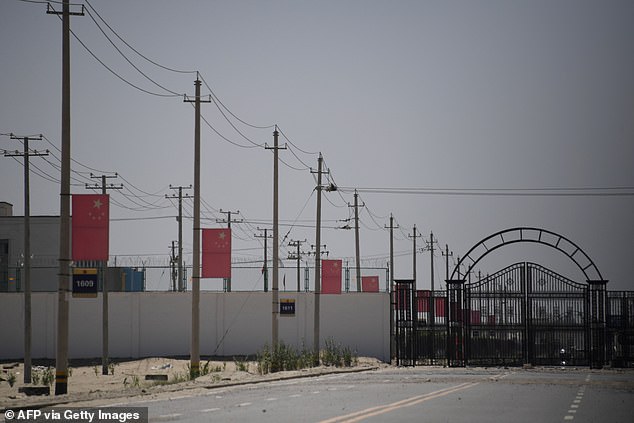 Mass detentions, executions, forced sterilization, rape, and the transfer of Uighur children to state orphanages all qualify as acts of genocide, researchers says (pictured, a facility believed to be a re-education camp in Xinjiang province)

‘In sum, China is deliberately inflicting collective conditions calculated to terminate the survival of the Uighurs as a group.’

They argue that birth rates in Uighur dominated areas has dropped to ‘near zero’ as the result of internment policies that target men and women of childbearing age, with the use of forced sterilization, IUD insertions and abortions.

‘Where detentions and forced labor schemes are leaving Uighur children bereft of both parents, they are being sent to State-run orphanages and raised in Chinese-language environments,’ they add.

For the report, the institute spoke with dozens of experts in international law, genocide studies, Chinese ethnic policies, and the region to assess evidence.

The report was released in the midst of China’s most-important annual political meetings, when its primary lawmaking bodies meet to approve new legislation.

Politicians also regularly take questions from the press during the events, but the session are tightly regulated.

It also came as China summoned Britain’s ambassador in Beijing on Tuesday to lodge ‘stern representations’ over an ‘inappropriate’ article she wrote defending media reports that are critical of Beijing.

Caroline Wilson’s article in Chinese was posted on the official WeChat account of the British embassy in Beijing last week, amid already tense relations between Britain and China over issues including Hong Kong, Xinjiang and the media.

Wilson sought to explain why foreign media criticism of the Chinese government did not mean the journalists responsible did not like China, but were in fact acting in ‘good faith’ and playing an active role in monitoring government action.

In a statement, China’s Foreign Ministry said the Chinese government and people had never opposed foreign media, rather those who make up ‘fake news’ to attack China and its ruling Communist Party under the banners of press freedom and freedom of speech.

‘The whole article is full of ‘lecturer’ arrogance and ideological prejudice … and is seriously inconsistent with the status of diplomats,’ it added in remarks attributed to the head of the ministry’s Europe department.

The UK Foreign Office did not immediately respond to a request for comment.