Online footage purporting to show hundreds of blindfolded and shackled prisoners in a mostly-Muslim region of China is believed to be authentic, a European security source has told Sky News.

The detainees are thought to be from China’s minority Uighur Muslims, the source said on Friday.

The footage, posted anonymously on Tuesday on Twitter and YouTube, shows lines of men, heads shaved, hands bound behind their back, sitting in lines on the floor or being moved by guards at a station in the city of Korla in Xinjiang, north west China.

The European security source said: “We’ve examined the footage and believe it to be genuine.

“It shows up to 600 prisoners being moved; they’re shackled together, have shaved heads, are blindfolded and have their hands locked behind their backs. This is typical of the way the Chinese move this type of prisoner.”

The images were thought to have been taken earlier this year, the source added.

Sky News was not able independently to verify the footage.

The Chinese embassy in London has yet to respond to questions about the clip submitted earlier this evening.

United Nations experts have spoken of “credible reports” of China holding one million Uighurs and other Muslim minorities at mass detention camps in Xinjiang.

But earlier this year the governor of the province denied this was the case, calling the facilities “vocational training centres”.

“Some foreign voices talking about Xinjiang, they have said that Xinjiang has ‘concentration camps’, or ‘education camps’, and so on,” Shohrat Zakir told Sky News in March.

“These statements are made up, they are lies and they are very ridiculous.”

In February, however, the Turkish foreign ministry described them as concentration camps where detainees face torture.

A YouTube account called War on Fear posted the one minute and 46 second footage that appears to show the shackled detainees with the title: Xinjiang: a New Explanation. 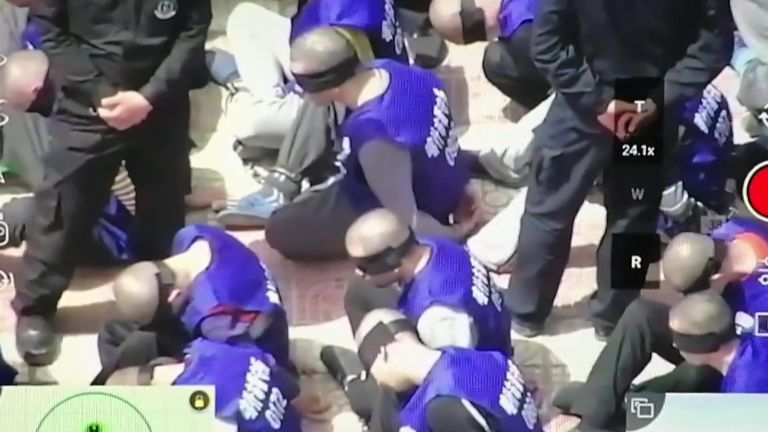 It is not known how the footage was taken – possibly by drone – but in an accompanying post on Twitter, the account holder wrote: “The people of today’s society always live under the supervision of the government with high technology. Now we use technology to show the modern society of Xinjiang. People lose their freedom. No hope for future.”

The account holder included the Twitter handles in its post of the human rights organisation Amnesty International and the United Nations human rights watchdog as well as Reuters and Associated Press, two news agencies.

A large group of purported detainees can be seen close to the train, dressed in purple bibs and wearing black blindfolds, sitting in lines on the ground, surrounded by what appear to be guards. Others can apparently be seen also sitting blindfolded but without the bibs.

Next, a number of detainees, without purple bibs but still blindfolded, are purportedly led on foot in a single file, with two guards accompanying each person, through a cream coloured metal gate.

Beijing has in the past repeatedly denied all allegations of abuse against the Uighur community and other ethnic minority groups in China.

China insists the alleged detention sites are “vocational” centres aimed at training and skills development. In a report earlier this year to counter criticism, the government said it had arrested nearly 13,000 people it described as “terrorists” and had broken up hundreds of “terrorist gangs” in Xinjiang since 2014.

The issue of the Uighurs could come up during the United Nations General Assembly next week when world leaders gather in New York.

Five human rights organisations have called on UN Secretary-General Antonio Guterres to condemn the Chinese government’s detention of more than a million Muslims in the Xinjiang region and call for the immediate closure of government detention camps.

In a letter to the UN chief released on Tuesday and reported by the Associated Press, the rights groups said these actions would be an important contribution to addressing “one of the most pressing human rights issues of our time”.

Criticism has grown over China’s internment of the Uighurs and members of other predominantly Muslim ethnic groups.