Chinese state media is accusing President Trump of trying to steal TikTok by forcing the sale of its US arm to Microsoft, saying it is part of America’s ‘decoupling’ strategy.

The Global Times published a piece on Tuesday denouncing Trump, saying he was trying to ‘kill China’s most competitive companies’.

They compared him threatening to ban TikTok- which has more than 800million users worldwide – to him outlawing Huawei.

‘The US’ decoupling from China starts from killing China’s most competitive companies. In the process, Washington ignores rules and is unreasonable.

‘Although suppressing Huawei and TikTok also incurs losses to the US, the suppression can still be implemented in the US. 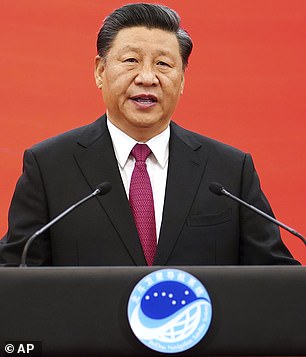 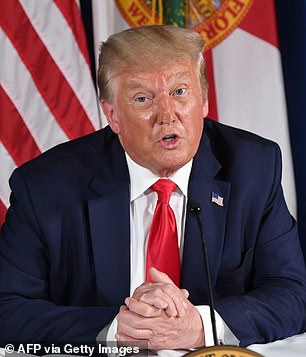 Chinese president Xi Jingping and President Trump are at war over the future of TikTok, which is owned by a Chinese company but has dominated the US social media space in recent months, stoking fears in Washington that it could be used against America

‘This is because such suppression echoes the sense of crisis instigated by some US elites when facing China’s rise,’ the article states.

It goes on to claim that Trump and the US are threatened by China’s dominance in technology, saying: ‘Huawei has advanced equipment, and ByteDance sells services to the world through unique concepts and technologies.

The two companies are pioneers worldwide.

‘They have brought a sense of crisis to US elites, which shows that China’s top companies have the ability to move to the forefront of the world in technology.

‘It reflects the power of China as an emerging market.

‘As long as such power continues to expand, these top Chinese companies can eventually break through US suppression.

‘When similar things happen time and again, the US will take steps closer to its decline.’ 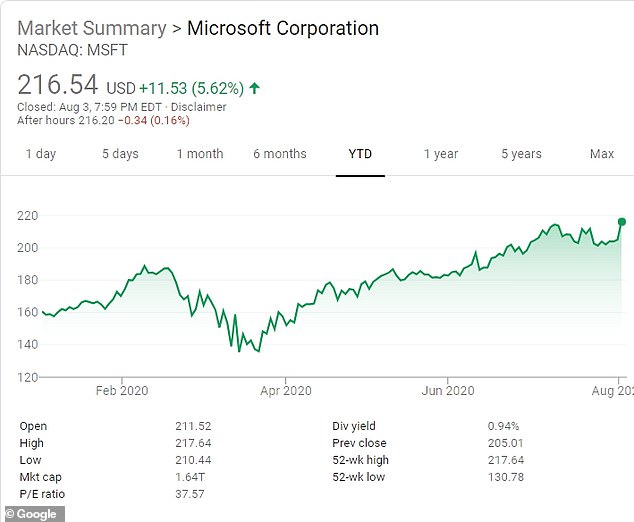 President Donald Trump said Monday he does not oppose Microsoft Corp acquiring the U.S. operations of TikTok and said he will ban the service in the United States on September 15 unless a sale is agreed upon.

The comments came after Trump on Friday said he was planning to ban the Chinese-owned video app’s U.S. operations after dismissing a possible sale to Microsoft. 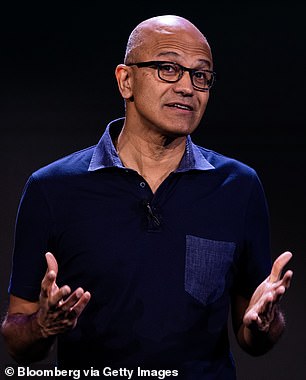 During a White House meeting, Trump said he didn’t mind if the US tech giant purchased the social media app after having a ‘great conversation’ with Microsoft CEO Satya Nadella

Talks of a possible buy of by Microsoft saw the tech company’s share price soar by nearly nearly 6%, or $11.53, on Monday.

The jump added $95 billion to Microsoft’s worth in a clear sign that investors back what some experts say could be a game-changing transaction for a mature technology company like Microsoft.

On Sunday Trump said that he had agreed to give China’s ByteDance 45 days to negotiate a sale of popular short-video app TikTok to Microsoft.

Trump also said the U.S. Treasury would need to get a lot of money out of a TikTok deal, but was not clear how that would happen.

Microsoft said Sunday that CEO Satya Nadella had spoken to Trump and ‘is prepared to continue discussions to explore a purchase of TikTok in the United States.’ 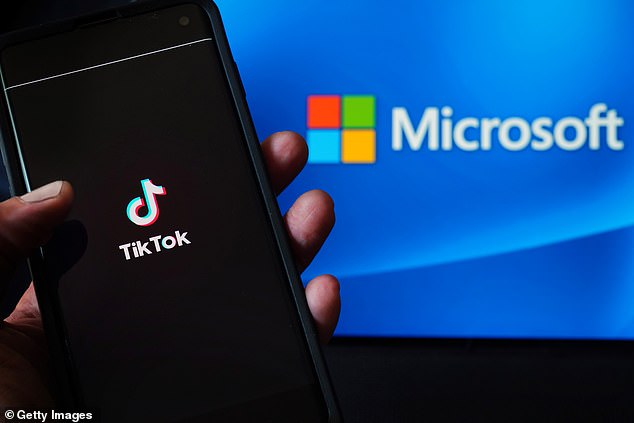 The talks of a TikTok buyout saw gains of $95 billion added to Microsoft’s worth bringing its total value to more than $1.6 trillion

WHAT DOES MICROSOFT STAND TO GAIN FROM BUYING THE US ARM OF TIKTOK?

TikTok’s catchy videos and ease of use has made it popular, and it says it has tens of millions of users in the U.S. and hundreds of millions globally.

Its parent company, ByteDance acquired Shanghai-based video app Musical.ly in a $1 billion deal in 2017 and relaunched it as TikTok the following year.

In its statement, $1.5 trillion company Microsoft said it may invite other American investors to participate on a minority basis in the purchase of TikTok. Financial terms were undisclosed.

ByteDance was valued at as much as $140 billion earlier this year.

Any deal with Microsoft to buy TikTok could be worth billions of dollars. It could also expose the company, which already owns Xbox, LinkedIn and Skype, to tech savvy teens.

Some congressional aides are worried about a backlash by younger voters against the party if Trump banned TikTok, which has 100 million American users.

Microsoft and TikTok parent ByteDance gave the U.S. government a notice of intent to explore a preliminary proposal for Microsoft to purchase the TikTok service in the United States, Canada, Australia, and New Zealand.

‘A U.S. company should buy TikTok so everyone can keep using it and your data is safe,’ Schumer said on Twitter, adding: ‘This is about privacy. With TikTok in China, it’s subject to Chinese Communist Party laws that may require handing over data to their government.’

White House trade adviser Peter Navarro suggested on Monday that Microsoft could divest its holdings in China if it were to buy TikTok.

‘So the question is, is Microsoft going to be compromised?’ Navarro said in an interview with CNN. ‘Maybe Microsoft could divest its Chinese holdings?’

Navarro said the Chinese government and military use Microsoft software ‘to do all the things they do.’

U.S. officials have said TikTok poses a national risk because of the personal data it handles.

TikTok CEO Kevin Mayer said in a blog post last week that the company was committed to following U.S. laws and was allowing experts to observe its moderation policies and examine the code that drives its algorithms.