Western Australia’s hard border has prompted an unprecedented tourism bonanza for Christmas and Cocos islands and reignited the debate over their tourism potential.

The duty-free tropical Indian Ocean destinations are a four hour flight from Perth but included in WA’s travel zone, which means people don’t have to quarantine when returning to the mainland. 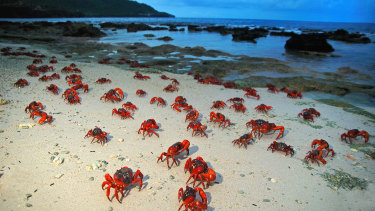 Christmas Island Tourism Association chairperson Lisa Preston said the demands on the island’s accommodation and infrastructure are a challenge, but no one is complaining.

“West Australians have really embraced the opportunity and I think we’ve been bumped up people’s bucket lists,” she said. “I can’t recall the interest being on this level. It’s phenomenal.”

But the surge in tourism has also rekindled debate about Christmas Island’s once premier resort and casino, which is now crumbling on the edge of a cliff above the crystal-clear waters, which surround the 60 million-year-old extinct volcano.

Shut in 1998, the resort’s accommodation has only been used intermittently to house federal government workers dealing with asylum seekers arriving by boat.

The casino's gaming machines and card tables sit dormant in darkness and dust after being abandoned.

Left behind are the operation’s financial records and flight manifests featuring the names of high-rollers who had arrived from nearby Indonesia and Malaysia.

The swimming pool is unusable and resort cars and air-conditioning units are rusting away.

As recently as last year, the Morrison government was being lobbied to re-license the casino and allow the resort to become viable once again.

But the debate goes nowhere, much to the frustration of the island’s shire council Gordon Thomson.

“We were making great strides forwards in December 2018, and into 2019, to get the place open,” Mr Thomson said. “It’s a decision that has to go to the cabinet to open the casino, but it hasn’t happened.”

The island, with its perfect diving waters and unique wildlife, has been embroiled in controversy since the infamous 2001 Tampa affair, when then prime minister John Howard refused to let 433 asylum seekers onto the island.

In 2003, a prison-style detention centre, where evacuees from the Chinese coronavirus capital of Wuhan were quarantined in February, was opened.

The federal government’s strategic stake in the island is obvious, but many locals often ponder why the island’s tourism potential is held back.

“It’s a complete and utter waste, “ Mr Thomson says of the decaying resort. “I call it an economic crime. The community wants it and it was successful. It’s a significant piece of real estate and it should happen.”

As the resort arguments rage on, tourism operators are revelling in the coronavirus-inspired interest in the island.

“We’re getting a broader scope of travellers,” Lisa Preston said. “We’re getting people who realise they won’t be heading to Bali for their Christmas holidays and they are looking at us as an alternative. I get up every morning and pinch myself.”