Aden: Arab warplanes and warships pounded Houthi positions in Yemen's Hodeidah on Thursday as a Saudi-led alliance tried to seize the main port in the largest battle of a war that has already lasted three years.

Apache attack helicopters bombed a strip of coastal territory near the city's airport, two residents said as the battle entered its third day. 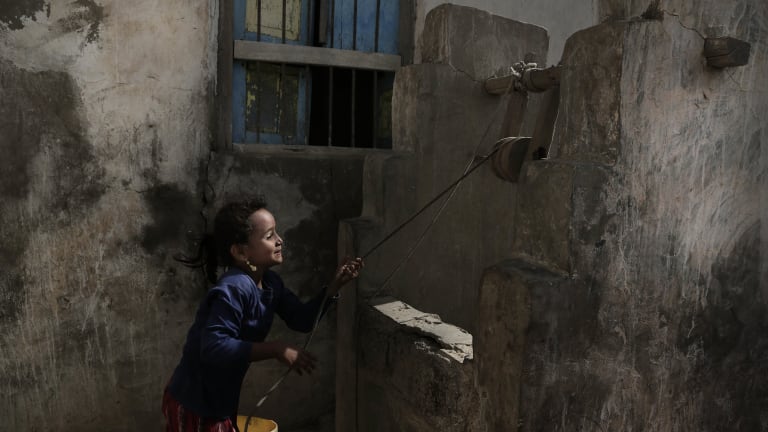 A girl pulls water from a well in the home of Ahmed al-Kawkabani, leader of the southern resistance unit in Hodeida, Yemen.

"The fighting is getting close to the al-Manzar area near the airport and people are fleeing in fear," said Mohammed Abdullah, an employee of the Houthi administration in the city.

"My family left for Sanaa yesterday but I stayed behind alone to protect our home from looters," he said.

The United Nations is struggling to avert disruption to the port, the main lifeline for food aid to a country where 8.4 million people are on the verge of starvation. 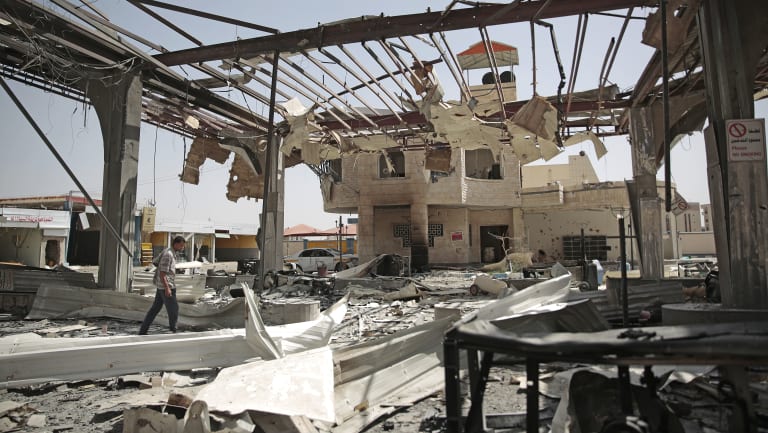 A Yemeni man walks among the rubble of a petrol station after it was hit by Saudi-led airstrikes in Sanaa in late May.

"The situation is dire and we don't know how it will end," said Khadija, a teacher in Hodeidah.

The Iran-aligned Houthis control Sanaa and most of the country's populated areas. The Arab states have been fighting since 2015 to unseat them, restore an exiled Saudi-backed government and halt what they see as Iranian expansionism. 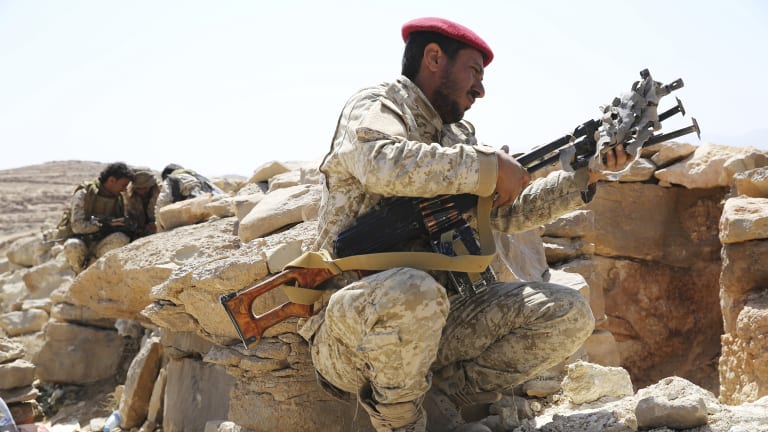 A Yemeni soldier allied to the country’s internationally recognised government prepares his machine gun on the outskirts of Sanaa in February.

Ousted President Abd-Rabbu Mansour Hadi, who lives in Saudi Arabia, arrived in Aden on Thursday in his first trip to the southern city in over a year. Aden has served as his government's temporary capital since 2015.

"Our imminent victory in Hodeidah will be the … gateway to retrieving our kidnapped capital and exerting the influence of the government over every inch of the country," he said.

US says no to more support

Despite strong American ties with coalition members, particularly the United Arab Emirates and Saudi Arabia, the Yemen war faces strong opposition in the US Congress.

The United States rejected a request from the UAE for intelligence, mine-sweeping and airborne intelligence, surveillance and reconnaissance (ISR) assets for the Hodeidah offensive, a UAE official said, speaking on condition of anonymity.

However, the official said France had agreed to provide mine-sweeping support for the operation. The official said UAE intelligence indicated that Houthis had mined the port.

The UAE ambassador to Australia issued a statement saying the oepration "will enable much-needed aid to be delivered".

Obaid al-Heri Salem al-Ketbi said the UAE and other Arab Coalition partners launched the military action at the request of Yemeni government.

Capturing Hodeidah, the Houthis' only port, would give the coalition the upper hand in the war, in which neither side has made much progress for years. The Houthis generate $US30 million ($40 million) to $US40 million a month in revenue from the port, the UAE official estimated. 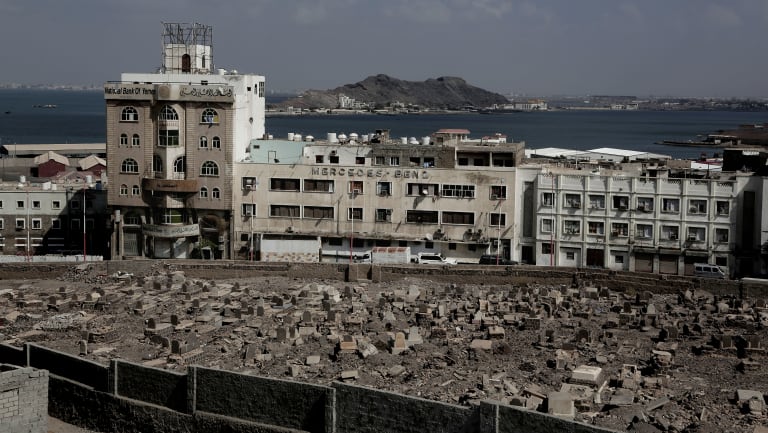 Once a peg in a thriving commercial centre that sprang up under colonial rule, the Mercedes Benz dealership sits empty and pockmarked with bullet holes in Aden, Yemen.

The US and other Western powers provide arms and intelligence to the Arab alliance and human rights groups criticise them over the airstrikes, which have led to hundreds of civilian deaths.

At the same time, the United Nations says 22 million Yemenis need humanitarian aid and the number at risk of starvation could more than double to more than 18 million by year end unless access improves.

The world body said it was still bringing aid: "We are there and delivering, we are not leaving Hodeidah," UN humanitarian coordinator for Yemen Lise Grande said.

The Arab states say they must recapture Hodeidah to deprive the Houthis of their main source of income and prevent them from bringing in missiles.

Dozens of missiles have been fired at Saudi Arabia in recent months.

Arab diplomats say there are plans to prevent the battle from worsening a humanitarian disaster and they will be able to improve food supplies once they control the port.

Ali al-Ahmed, the Emirati ambassador to Germany, said there were 60,000 tonnes of humanitarian aid ready on ships and trucks to move into the region once the fighting died down. He said it would take Arab forces about 72 hours to clear mines from Hodeidah's port or airport once it captures them.

"It's very important for our credibility to make sure that people in need get the help they need," he said.

The war in Yemen is one of several regional conflicts that pit allies of the Sunni Muslim Arab states against forces aligned to Shiite Iran. The Houthis, from a Shiite minority, deny being Iran's pawns and say they took power in a popular revolt and are defending Yemen from invasion by its neighbours.

Houthi leader Mohammed Ali al-Houthi has blamed the West for the assault: "The British told us a week ago that the Emiratis and the Saudis had told them they would not enter the battle of Hodeidah without their agreement and assistance."

A Houthi statement warned commercial ships in the Red Sea, one of the world's most important trade routes, to stay 32 kilometres from coalition warships or potentially face attack.