Describing itself as an “ethical grocer delivering delicious food direct from local farmers”, it specialises in fresh, organic produce. 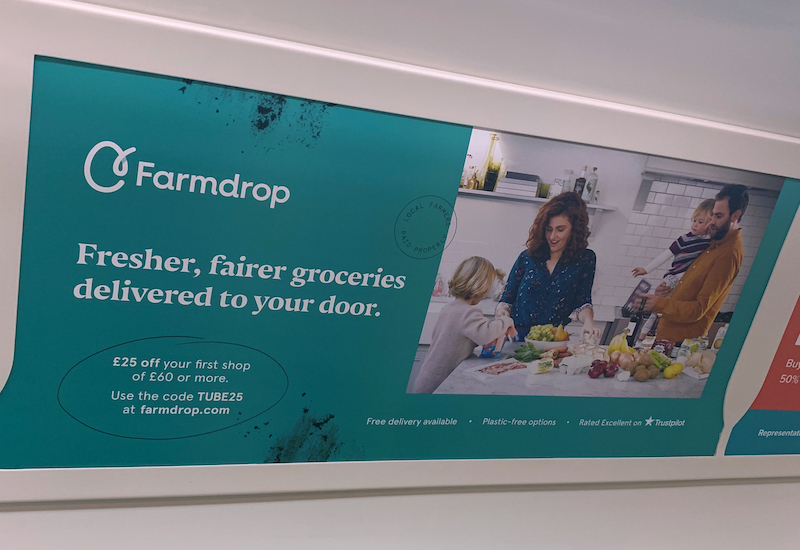 It has rarely been accused of peddling junk food to children — yet that is what Transport for London found it guilty of this week.

The company said it was “shocked” to be the first victim of London’s new advertisement restrictions on public transport.

It transpired that its Tube advert showed products that are high in fat and salt — specifically butter and bacon.

If you squinted, you could even make out peanut butter, jam and elderflower. All forbidden under the new rules.

The Farmdrop episode is an early sign that there is more to the crackdown on so-called “junk food” than we have been led to believe.

But junk food has no legal definition. It is a pejorative term used by campaigners such as chef Jamie Oliver to push their nanny state agenda.

In practice, the legislation will apply to all food or drink considered to be high in fat, salt or sugar (HFSS) — and that includes the kind of food your grandmother would have approved of, such as butter and jam.

The official definition of HFSS was drawn up over a decade ago, when Tony Blair banned junk food advertising on children’s television.

A system was devised in which food products were given a mark out of 40, with points added for “negative” nutrients — such as saturated fat, sugar and sodium — and points subtracted for “positive” nutrients such as fruit, vegetables, protein and fibre.

Calories are also counted as negative nutrients. If a food gets more than four points, it is classed as HFSS and cannot be advertised on children’s TV.

The system was never intended to be a measure of “junk food” or “unhealthy food”. It was only supposed to distinguish “less healthy” food from “more healthy” food for the purposes of encouraging children to eat better.

Nevertheless, the system has since been adopted by the Mayor of London, Sadiq Khan, for his ban on junk food advertising on public transport.

In reality, the system sets the bar for “healthy food” so high that it condemns hundreds of everyday products as junk.

I have never met anyone who thinks that raisins, sultanas, hummus, walnuts, pesto, olive bread, dressed salads and tomato soup are unhealthy, yet all would be covered by the Government’s proposed bans.

So too would dried fruit, cereal bars, margarine, most tinned fruit, most yoghurts, nearly all cheese (including half-fat cheese), many pasta sauces and one in four sandwiches.

As if this system were not puritanical enough, Public Health England is in the process of making it even harder for food and drink to be classed as “more healthy”.

This will leave the Government in the absurd position of officially advising people to drink pure orange juice as one of their five a day while banning adverts for it because it is junk.

Some snacks Public Health England recommends as part of its £4.5million Change4Life campaign will be classified as HFSS, as will most of the soft drinks that have been reformulated with less sugar.

Under pressure from the Government, and to the fury of many loyal customers, brands such as Irn-Bru and Lucozade have had their sugar content cut dramatically, and yet they will face severe restrictions on price and promotion under the Government’s plans.

Looking at the range of food and drink products that are classified as HFSS, it becomes clear that what is being proposed is not so much a crackdown on junk food as a crackdown on food in general, with exemptions for raw ingredients and health food.

Politicians and the public have been sold a pig in a poke by those who campaign against the meaningless category of “junk food”.

When asked if they agree with a ban on junk food adverts that are targeted at children, most people say they do, but that is not what is being proposed.

If they were asked whether they would support a ban on olive oil being advertised during the Channel 4 News, they might take a different view.

We are sleep-walking into legislation that is far more extensive than most of us realise.

Hysterical claims about junk food have been used as cover for tobacco-style regulation being rolled out across the food supply.

The nation’s biggest and most important industry could soon be banned from advertising most of its products during daytime television, costing broadcasters tens of millions of pounds and lowering the quality of programming.

The ban on HFSS products being positioned at the entrance, checkout and end of aisle will cause shopkeepers all kinds of headaches, and the ban on discounts, such as buy-one-get-one-free, could cost consumers hundreds of pounds a year.

Surely a rethink is in order?