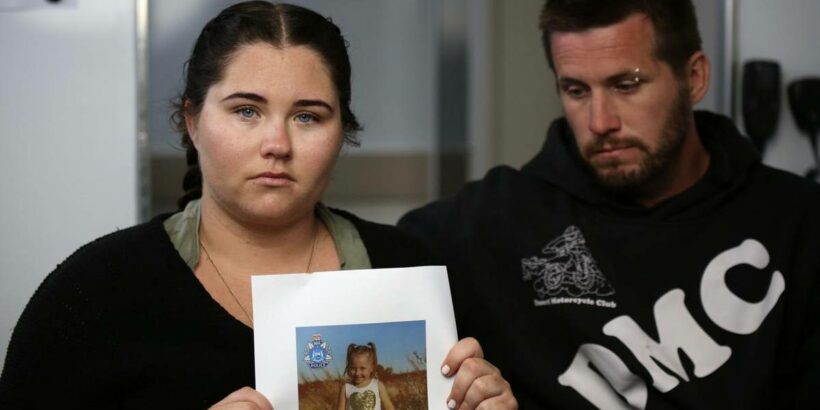 Police have shut down a conspiracy theory suggesting Cleo Smith was never at the campsite she disappeared from on Saturday, citing evidence that could not be publicly disclosed.

Assistant Commissioner Darryl Gaunt confirmed on Wednesday that no campers recalled seeing Cleo at the Bowholes campsite after her family arrived Friday about 6.30pm local time.

“No one’s actually seen her from the public’s perspective,” Gaunt told 6PR radio.

He said there was however other evidence that had not be publicly disclosed that reassured police she was in fact at the camp ground before going missing.

“So there’s nothing to infer that she wasn’t there at this stage,” he said.

Gaunt also confirmed investigators were looking into a camper’s report that a car was heard screeching about 3am, shortly after Cleo was last seen.

The 4-year-old woke for a drink of water at 1.30am and was gone from the campsite, north of Carnavon in Western Australia, when her mum Ellie Smith got up at 6am.

Gaunt said that car screeching was one of several reports received from people in the area who noticed odd activities and noises overnight.

Without expanding further, he confirmed police were not in a position to exclusively rule the car tyre noises in or out as a crucial part of the investigation.

“It’s a little bit unsubstantiated but we’re not ruling it out,” he said.

He said police had “investigated and responded to the vast majority” of the reports of odd sounds and activities, and had been able to explain “most of them”.

Gaunt added that more resources had been deployed into investigating Cleo’s possible abduction as the “forecast going forward gets worse each day”.

While search and rescue operations had run parallel to a criminal investigation from the outset, Gaunt said investigators’ efforts had ramped up in recent days.

“That was because the circumstances around this were quite unique. The lack of information, the terrain, the weather conditions, the location, all of things gave us far more questions than we could give answers to,” he said.

Gaunt said police were not exclusively treating Cleo’s disappearance as an abduction.

More resources were however being put into the investigative side of the case.

Gaunt said that despite being several days into a broad-scale search, no evidence had yet suggested Cleo had gone missing on her own volition or someone else’s.

“At this stage we’re not really finding much that tends to give us an impression one way or the other as to what’s happened,” he said.

All of the beach shacks had been thoroughly searched on the inside, outside and underneath, along with every piece of infrastructure in the surrounding area and coastline.

Some of the shacks, Gaunt said, would be searched again.

Western Australian police are now focusing on the “worst case scenario” in the hunt for Cleo Smith — as her shocked parents revealed the 4-year-old had been sleeping metres from her baby sister before she disappeared from the family’s tent.

A disturbing picture of what happened the night she vanished is emerging, with police revealing a “lot of people” were circulating the campsite at the time and Cleo’s parents revealing horrifying details about the moment they realised she was gone.

Cleo was last seen about 1.30am on Saturday near the Blowholes campsite north of Carnavon in Western Australia.

Cleo’s mother Ellie Smith said she had woken up around 6am on Sunday to find their tent zipper was nearly completely open and her 4-year-old nowhere to be seen.

She revealed Cleo had been sleeping in a separate area of the tent, with her baby sister just metres away.

They have also admitted that she may have been taken interstate by now.

Inspector Jon Munday said Cleo could “be anywhere now” given five days have passed since she was last seen.

“It is a race against time. We’re just trying to find answers.”

The entire area where Cleo vanished has been declared a potential crime scene, with the campsite closed and investigators imploring anyone who has been in the area to come forward.

Munday said the case was “a mystery we’re trying to unravel”, as he revealed “quite a lot of people” had been staying at the Blowholes campground that night.

“We’re tracking and tracing all of those people at the moment, but there’s also nothing to indicate that there’s any cause for the wider community to be alarmed,” Munday said.

Police have also been searching a number of “shacks” along the coast near the campsite which are occupied by long-term residents.

“You’d have to have reason to be there,” a police source told PerthNow. “It’s a destination — not a place you’d just pass through to go somewhere else.

“It’s not like a little town where you’d stop for a pie and petrol and then keep going.”

On Tuesday, Cleo’s distraught mother, and her partner Jake Gliddon, spoke publicly about Cleo’s disappearance for the first time since posting about it on social media over the weekend.

Smith said Cleo would never wander off and would have asked for help to unzip her one-piece sleeping suit if she needed to use the toilet.

“She’s lazy when it comes to walking,”Smith said.

“She would never leave that tent alone.”

Asked if they feared someone had taken Cleo, Smith said the family was still hoping to find her.

Smith said someone had to know where Cleo was.

Cleo was sleeping beside her younger sister Isla who was in a cot, while Smith and

Gliddon slept on a mattress in a room next to them.

“I checked on Isla, made sure Isla was okay. I got back in bed and that was it really,” Smith said.

“We went back to sleep. [I later] woke up to Isla wanting a bottle.

“As we passed the divider, I went into the other room and the zipper was open.

“Cleo was gone and that was about it for Saturday morning until everything started.”

“She was gone. The tent was completely open. It was about 30cm from being open,” Smith said.

“We went looking, checking, making sure she wasn’t around the tent.

“Then we got in the car and started driving around everywhere.”

Smith said she was very familiar with the area.

“We literally grew up probably like 100m from where our tent was — that was where we stayed at the same age, so we just looked everywhere that we went as kids and we couldn’t find her,” she said.

“Then we realised we have to call the cops because she’s not here.”

Smith described what was going through her mind at the time.

“Where is she? She needs breakfast. What is she doing? Everything was going through my head,” she said.

Appearing emotional during the interview, Smith described her ongoing anguish.

“We haven’t really slept. We’ve had so much family help us and support us,” she said.

“Everyone asks us what do you need and really all we need is our little girl home.”

Smith said she did not know what happened to Cleo but she wished she did.

“No idea. There’s probably a million things that I’ve thought of. They’re searching every angle that we probably have thought of,” she said.

“The worst part is, we can’t do anything more. It’s out of our hands so we feel hopeless and out of control.

“We sit and watch the sand dunes and think she’s going to run down it and back into our arms, but we’re still waiting.”

Smith, who works at a beauty salon, described her daughter as beautiful, delicate and funny, with “the biggest heart”.

“Every day she wants to wear a princess dress,” Smith said.

“She’s so sweet. She’s everything that you’d want in a little girl.”

Although Cleo was “terrified of the ocean”, Smith said the family had brought Cleo’s bike so she could learn to ride without training wheels.

“Cleo was born eight weeks early, she was premature and she’s been strong from the day she was born, so I know she can get through whatever she’s going through.”

Wild weather hindered the search on Tuesday morning, but by midday local time the operation was back on track.

WA Police have also asked agencies in other jurisdictions across the country to spread the word, taking the desperate search nationwide.

A GoFundMe page has been set up by local man Bill Kent to help Cleo’s family and the search efforts, so far raising more than $48,000.