Next stop, global domination! Clever sheep is caught on video opening its door and escaping from pen

Baffled staff at a city farm have finally discovered how their lambs have been escaping their enclosure and running wild.

The creatures – not normally known as intellectual powerhouses – have worked out how to unbolt the door to their pen.

Video from Gorgie City Farm in Edinburgh shows one of the clever lambs patiently working the bolt on its door.

The 20-second clip shows the animal using its mouth to take hold of a metal lever.

It then moves the handle up before cleverly sliding it to the left – leaving the hatch unlocked.

The lamb then continues to yank on the lever so the hatch door bounces open – showing a glimpse of light into the outside world.

It then can be seen leaping out the hatch before the clip cuts out.

Hilariously the sound on the video has been dubbed over with the Mission Impossible soundtrack.

Gorgie City Farm posted the clip on Facebook yesterday, writing: ‘We’ve been trying to find out how our lambs have worked their way out of their shed….and now we know!

‘See if you can spot them on a mission next time you visit the Farm.’

The clip has since attracted almost 2,000 views on Facebook and comments from impressed animal lover.

Elton Ferguson said: ‘For all my six years of farming I have not seen that before. May as well give it a gold star for just opening a gate.’ 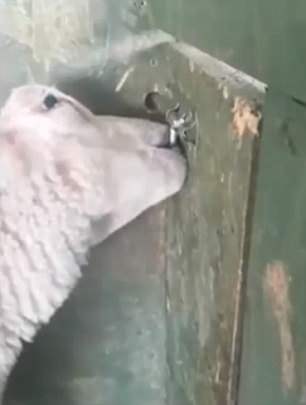 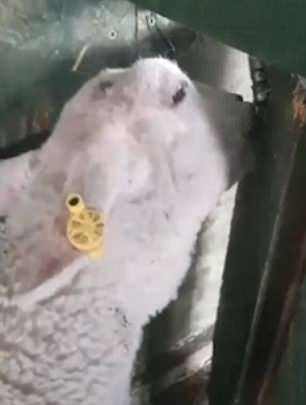 Gorgie City Farm is a free-entry farm which is supported from donations from the public.

It was established in the late 1970s, officially opened in 1982, and houses animals including pigs, sheep, cows, goats and guinea pigs.