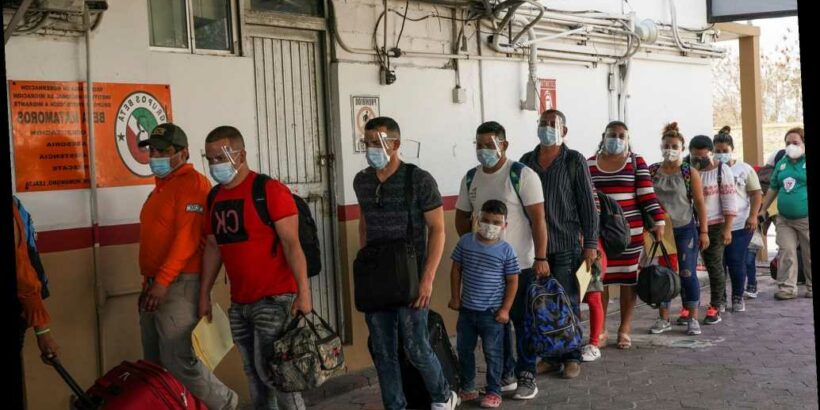 Without debate, President Biden has decided on complete open borders

Surge in COVID-positive migrants being released in US

An intel ‘bombshell’ that wasn’t and other commentary

Mexican migration officials on Sunday reportedly shut down a border camp for Central American migrants — sending most of the 800 residents to the US regardless of COVID-19 infection status — as a result of President Biden ending former President Donald Trump’s “Remain in Mexico” policy.

Many of the asylum seekers reached nearby Brownsville, Texas, where local officials said Monday there’s a growing number of infected migrants and nothing being done to enforce quarantines.

The newly released migrants were not all counted among the latest COVID-19-positive results but may add to the growing figure.

As of Saturday, 185 of 1,553 migrants tested at the Brownsville central bus station since Jan. 26 had tested positive for the virus, city spokesman Felipe Romero told Fox News.

The camp at Matamoros, Mexico, closed as after the termination of Trump’s “Remain in Mexico” policy for Central Americans — under which about 71,000 Central American asylum applicants were awaiting rulings in northern Mexico.

Republicans say that Biden has sparked a crisis on the US-Mexico border by sending a message that new migrants will be welcomed into the country — despite the White House saying migrants should wait to come later due to the COVID-19 pandemic.

White House Press Secretary Jen Psaki said Thursday it’s not the federal government’s job to test migrants for COVID-19 before they are released. She said that’s the responsibility of state and local governments, and that non-profits have in some cases “reserved hotel blocks” to help house COVID-19-positive people.

“And that certainly is something that our policy is to have that be done, concluded before they are even moved to go stay with family members or others they may know well their cases are being adjudicated.”

Texas GOP Gov. Greg Abbott last week accused Biden of allowing for the “importing” of COVID-19 via the release of migrants. The governor tweeted: “The Biden Administration is recklessly releasing hundreds of illegal immigrants who have COVID into Texas communities. The Biden Admin. must IMMEDIATELY end this callous act that exposes Texans & Americans to COVID.”

Advocates of the “Remain in Mexico” policy say it deters asylum-seekers from entering the US despite knowing that their claim of persecution is likely to be denied.Some asylum seekers in the US are allowed work permits as their claims are processed.

Migrants who were once held in border camps in Mexico while they were being processed in the US courts for entry are no longer detained as part of the Biden administration rolling back the policy.

“The president of the United States, Biden, helps the people because it’s necessary, you know,” Mario, a Honduran migrant who spent eight months at a camp with his family and is still awaiting entry to the US, told Fox News.

The White House admitted Monday it isn’t doing enough to discourage people from seeking unlawful entry to the United States.

Psaki acknowledged the failures after being pressed about the administration’s handling of the situation.

“I would say it’s clear we need to work more on getting the message out and being very clear, now is not the time to come,” she said, before reiterating the Biden administration’s claim that “the majority of people who come to the border are turned away.”

“Yes, we have changed the policies of the last administration as it relates to unaccompanied children, but the majority of families, adults, the vast, vast majority are turned away at the border. And that is a message that clearly we need to continue to look for means and ways of getting out, you know, more and more out to the region,” she continued.

Her comments followed the revelation that under Biden, the Department of Homeland Security will convert two immigrant family detention centers in South Texas into Ellis Island-style rapid processing facilities, and has already emptied a facility in Pennsylvania.

Immigration and Customs Enforcement wrote in a court filing last Friday that while families continue to be detained at its locations in Karnes City and Dilley, adults and children are all released within 72 hours.