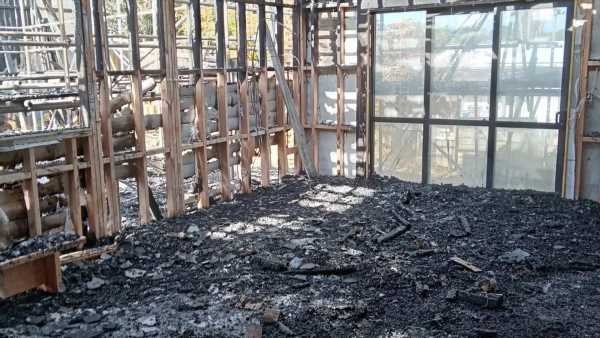 Spilled fuel has been discovered among the wreckage of a set of newly built homes in South Auckland that erupted in flames under suspicious circumstances, the Herald understands.

Sources have told the Herald gasoline was found on the top floor of one home that remained largely unscathed by the fire at Derrimore Heights in Clover Park on Monday morning.

It appeared to be spilled over the floor and there was a strong smell, the Herald understands.

Three other homes under construction next door were completely destroyed by the blaze and the interior of a fourth home was reduced to rubble and ash.

Police are refusing to comment on the claims of gasoline. They, along with fire investigators, have been treating the fire as suspicious.

“As the investigation is ongoing, police have no further comment as this time,” a spokesperson told the Herald.

Workers were beginning to clean up the extensive charred remains of the construction site when the Herald visited this week.

It’s understood an assessor will inspect the homes to determine whether the framing can be saved.

One neighbour told the Herald construction appeared to be almost complete on the new two-storey homes, and parties had been coming to view them in recent weeks.

No one was in the homes at the time and there were no injuries.

Fire and Emergency said the fire “could have had devastating consequences”.

“This goes show fire gets real, fast, and a house fire can become deadly in less than three minutes,” Fenz wrote in a social media post.

It encouraged people to check their smoke alarms are working and to have an escape plan.

Fenz said it understands smoke alarms were not yet installed in the homes.

Auckland Council had granted resource consent for “three new standalone two storey dwellings” to be built at the address.

“The proposal will add to the housing stock and create development with good quality amenities for the future occupants without detracting from the amenities of the surrounding properties,” council documents said.

One neighbour said he woke around 5am and saw flames reaching above the house. He said he was scared the fire was going to reach his home – but fire crews arrived in time.

A neighbour across the street, Michelle Nguyen, said her family awoke to beeping of car horns before seeing a “huge orange cloud”.

She said police had spoken to her and believed the fire might be suspicious because there were no electrical lines installed at the newly built homes.

She said construction had been ongoing for about six months and believed the homes were almost finished, because she had seen groups of people come to view them in recent weeks.

She said the owners of the properties were at the scene on Monday, and police were seen making inquiries with other residents on the street.

Nguyen said her family were worried they were going to have to evacuate as the blaze grew, and they could hear windows smashing.

“It was horrific to see,” she said.

“I gotta say, we were quite scared.”

On arrival, firefighters found the properties “well-involved”, and there were nine trucks in attendance.