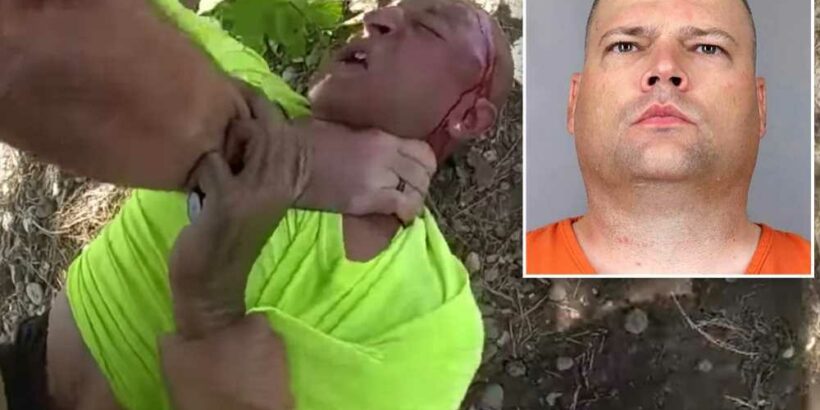 A Colorado police officer is facing criminal charges after pistol-whipping, choking and threatening to shoot an unarmed man who had a warrant out for his arrest, cops said.

“Whoa, what did I do?” the man asks Haubert as he’s pushed backward onto his back. “Whoa, what the hell did I do, dude?”

Haubert then orders the man — who was ultimately not criminally charged — onto his stomach while the man pleads not to be shot. The officer proceeds to put his duty pistol to the man’s head before striking him with the weapon multiple times, the footage shows.

Haubert then chokes the man as he pleads for help, saying he “didn’t do anything” or try to run away, the footage shows.

“If you move, I will shoot you,” Haubert says. “Do not move. Stop fighting!”

The man is handcuffed as he pleads for water, video shows. He was not charged in the incident, according to the Denver Post.

Aurora Police Chief Vanessa Wilson told reporters Tuesday that Haubert has been charged with attempted first-degree assault, second-degree assault and felony menacing in the incident. Martinez was also charged for not intervening to try to stop Haubert during the arrest.

The officers, who surrendered to police, have since bonded out of jail, a frustrated Wilson told reporters while showing the “disturbing” police footage.

“This video will shock your conscience,” Wilson said. “It is very disturbing.”

Wilson said the officers approached the man after finding out he had a warrant out for his arrest while responding to a trespassing call. She characterized Haubert’s conduct as a “very despicable act” not aligned with Aurora police.

“We’re disgusted,” she said. “We’re angry. This is not police work. We don’t train this. It’s not acceptable.”

The man, who was wanted on a probation violation, was later taken to a hospital for a welt and a cut on his head that required six stitches. Wilson said he likely didn’t know he was wanted on a warrant out of Denver.

An attorney for Haubert, meanwhile, declined to comment aside to say that he will be “zealously defending” the officer in court.

Both Haubert and Martinez were placed on leave following their arrest, the Denver Post reported.