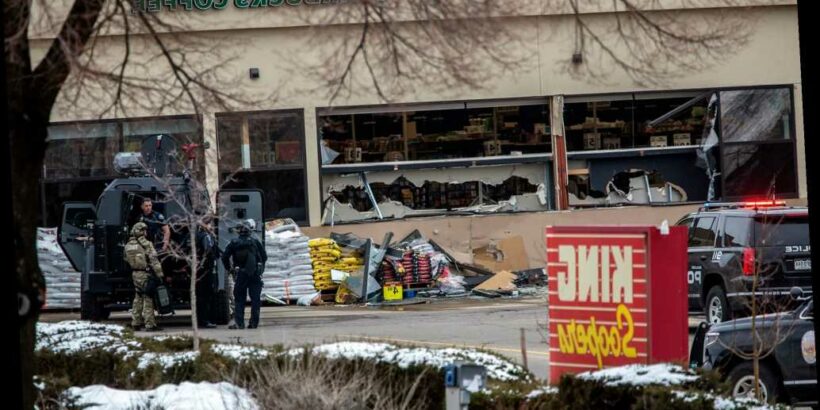 The Colorado mass killer engaged police in a “gunfight” that lasted nearly an hour — with officers unable to reach their fallen comrade because they feared an ambush, according to harrowing dispatch messages.

The first dispatch message alerting officers to the King Soopers store in Boulder came at 2:32 p.m., with the warning that “it looks like we have an active shooter,” according to recordings shared by 9 News.

“We have multiple calls coming from inside of people that have barricaded themselves inside,” the dispatcher then warned.

The shooter, who has yet to be identified, was described in the calls as “30s, white male, beard wearing a tact vest.”

The first two officers on scene — believed to include Eric Talley, the father of seven who was among the 10 killed — arrived and found “a party down. In front of the store,” a female officer radioed.

“Does not match the shooter description,” she said.

The officer’s voice quickly became panicked at 2:37 p.m. — just five minutes after the initial alert — when she radioed, “The shooter is inside — he just shot at us twice!”

Just a minute later, another officer reported, “Officer down inside the building!”

“We’re in a gunfight,” an unexpectedly calm-sounding officer reported at 2:39 p.m.

At 3:05 p.m., nearly 30 minutes after the report of an officer down, his colleagues were still unable to get to him to see if he could be saved, the messages made clear.

“I need to push into that officer. He’s about 30 yards inside the store, down — we cannot get to him.

“We have no known location of the shooter — we think he might be setting up an ambush,” an officer warned in the calls to dispatch.

According to the Colorado Sun, one officer also said, “Due to body armor, head-shots only.”

However, by 3:20 p.m. a traffic officer radioed through that he was “in contact with possible suspect,” and by 3:26 p.m. it was confirmed he was in custody.

“Per intel from the suspect that was pulled out, he said he came here alone,” an officer reported.

By the end of the nearly hour-long carnage, 10 people were dead, including officer Talley, 51.

Police later confirmed that the killer had been injured, but have yet to identify him, nor say if he was the half-naked man with a bloodied right leg filmed being led away in handcuffs.