VE Day in colour: Jubilant crowds celebrate Nazi defeat in photos transformed from black and white to mark the 73 year anniversary of Victory in Europe

These stunning images released in colour to mark the 73rd anniversary of VE Day show the jubilation of celebrating crowds in the closing stages of World War Two.

Britons are pictured waving Union Flags in the street after Allied forces secured victory in Europe over Hitler’s Nazis in 1945.

Separate pictures show triumphant US GIs being transported back to New York Harbour aboard the heavily crowded Queen Elizabeth after VE Day.

Winston Churchill is also shown waving from a balcony in Buckingham Palace alongside King George VI, the monarch’s wife and their daughters Princess Elizabeth and Princess Margaret. 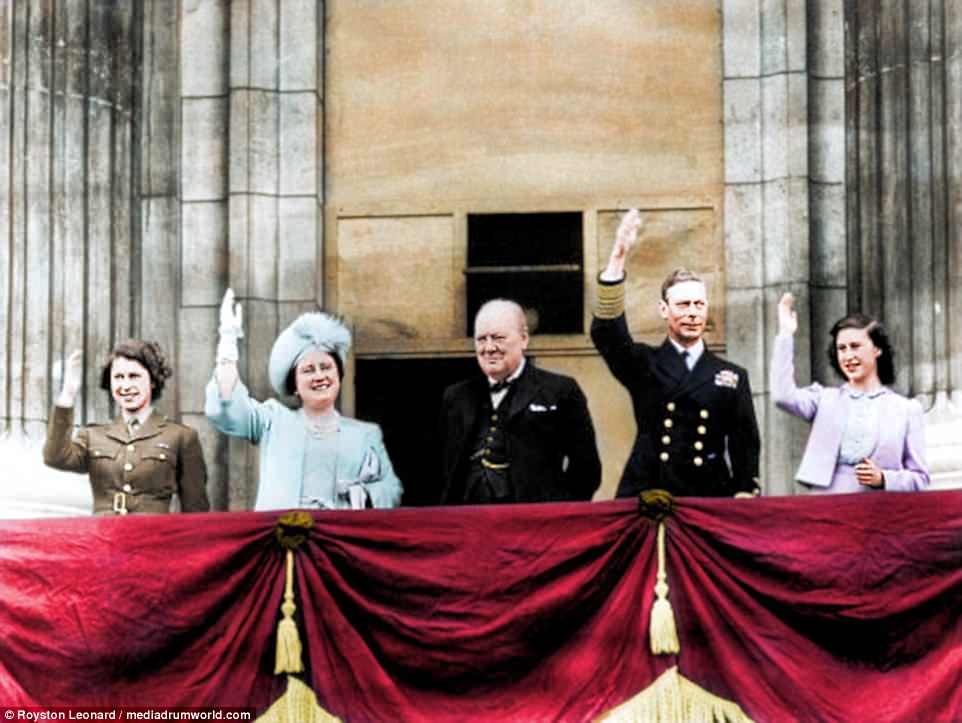 Stunning images released in colour to mark the 73rd anniversary of VE Day show scenes of jubilation towards the end of World War Two. In one photo, Winston Churchill (centre) is shown waving from a balcony in Buckingham Palace alongside King George VI (second from right), the monarch’s wife (second from left) and their daughters Princess Elizabeth (left) and Princess Margaret (right) on VE Day 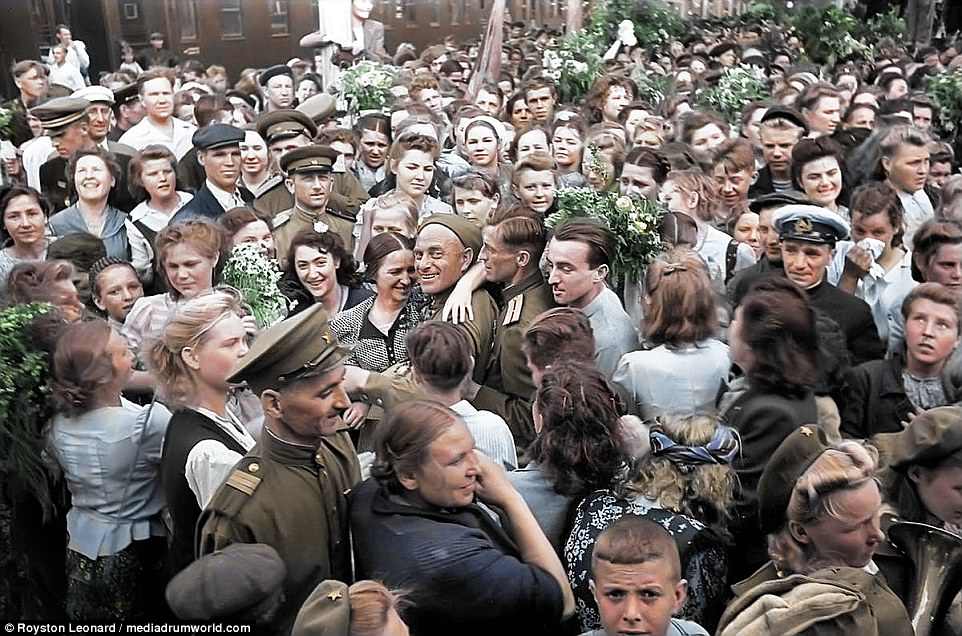 While there were celebrations across Europe, crowds also spilled out onto the streets in Moscow as Russian soldiers returned triumphant after Hitler’s defeat. Servicemen are pictured being greeted by jubilant crowds at the city’s Belorussky railway station in 1945 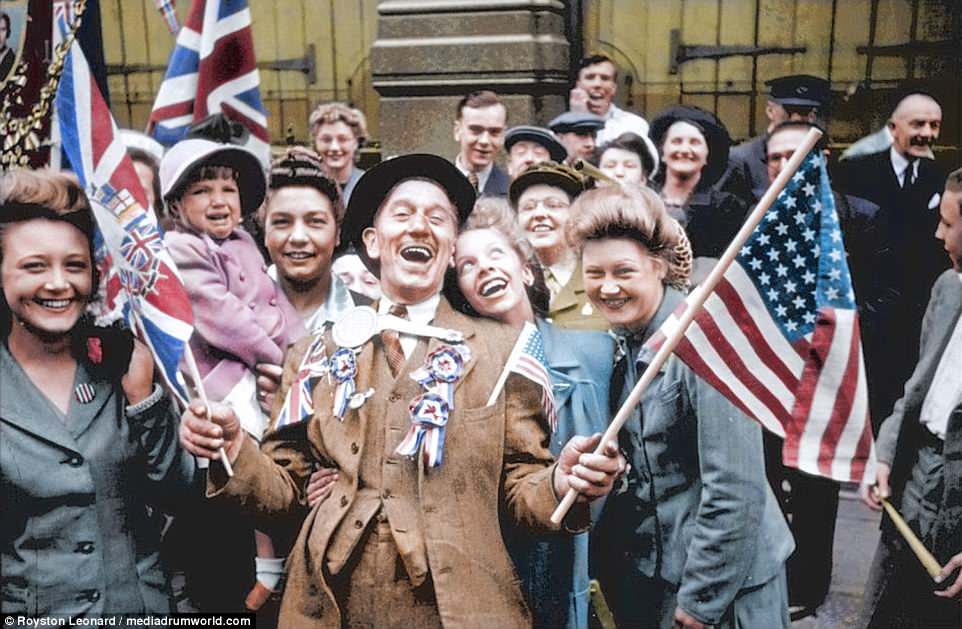 Huge crowds piled onto the streets after the Nazi surrender and waved US and British flags. The German surrender had been anticipated for some days, but when the news was confirmed it created waves of celebrations across Western Europe 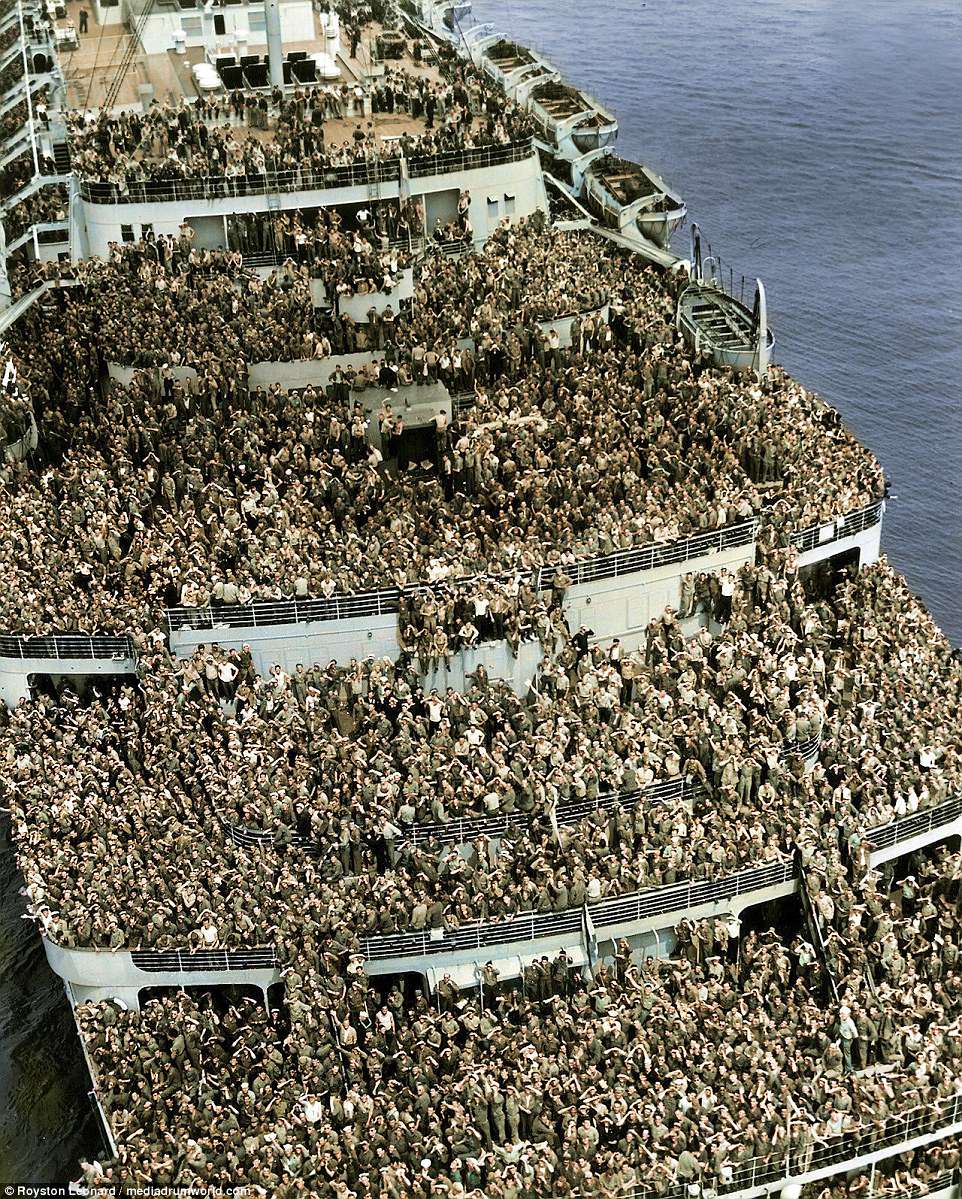 Coming home: Separate pictures show triumphant US troops being transported back to New York Harbour aboard the heavily crowded Queen Elizabeth after VE Day. So many troops crammed on to the ship’s deck that it was standing room only as they waved to crowds on the shore 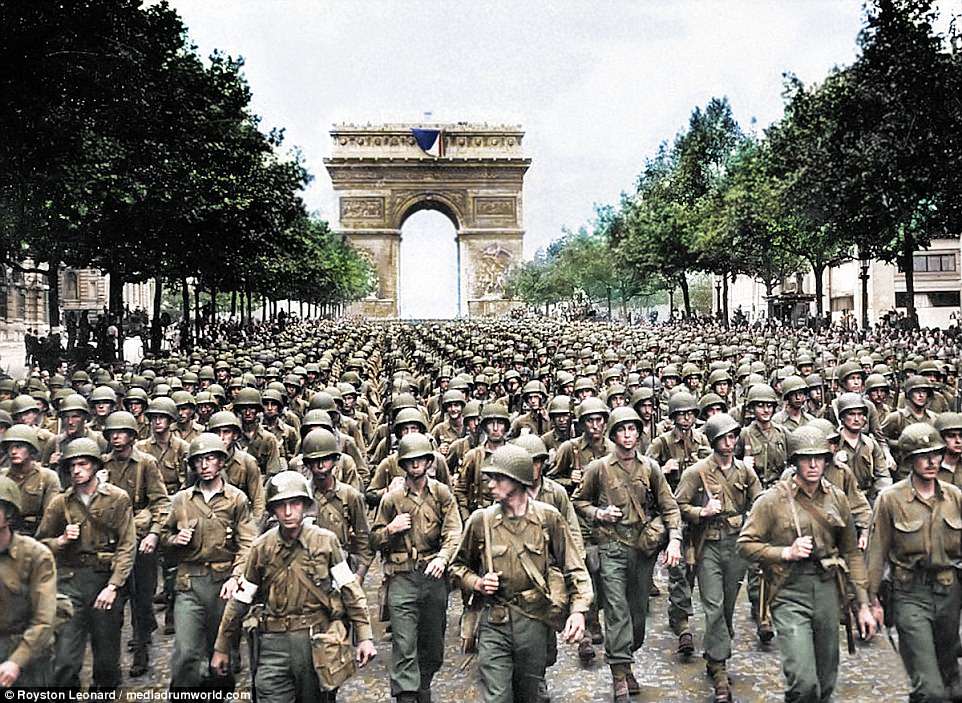 Soldiers of America’s 28th Infantry Division are pictured parading down the Champs-Élysées and under the famous Arc de Triomphe in Paris on August 29, 1944. It was the first US  division to enter the French capital after its liberation having been ruled by Nazi Germany since June 1940

Photos brought to life with colour also show Russian troops returning to Moscow and being welcomed with open arms by civilians.

The scenes of joy compare dramatically with that of a German battalion tank set alight by American troops in the city of Leipzig.

The photos were colourised by electrician Royston Leonard, 55, from Cardiff who spent between three and four hours colourising each picture. 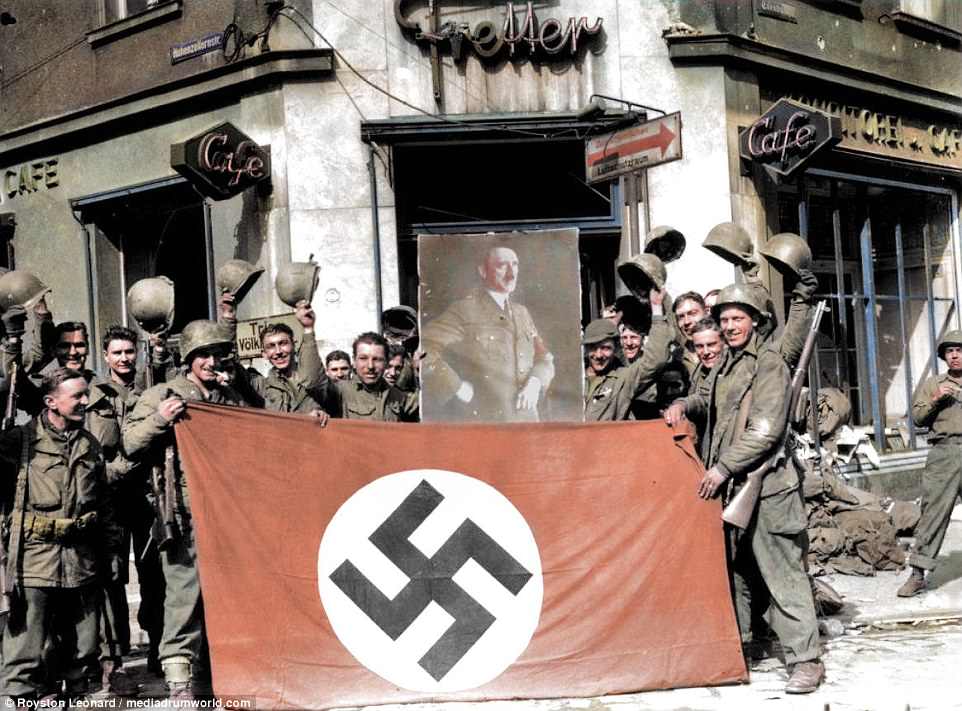 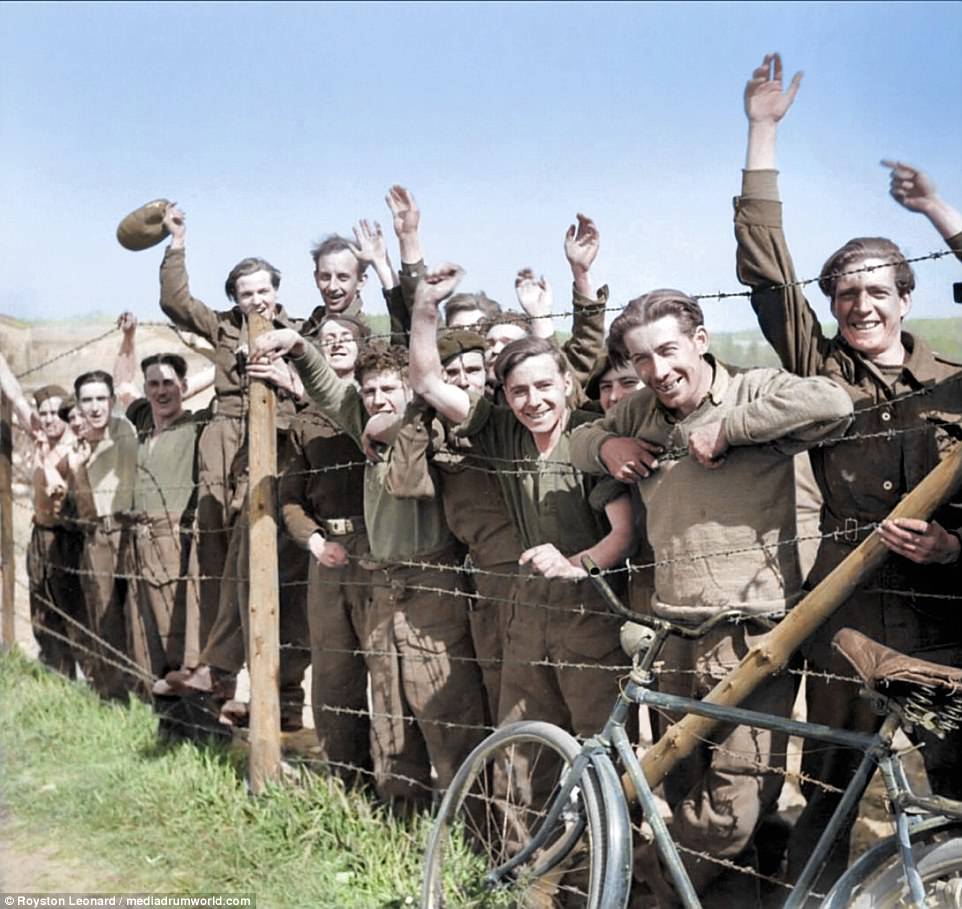 British troops cheering and waving their arms in jubilation from behind the barbed wire fence of Nazi prisoner of war camp Stalag 11B near Fallingbostel in the German state of Lower Saxony, the first POW camp to be liberated on April 16, 1945 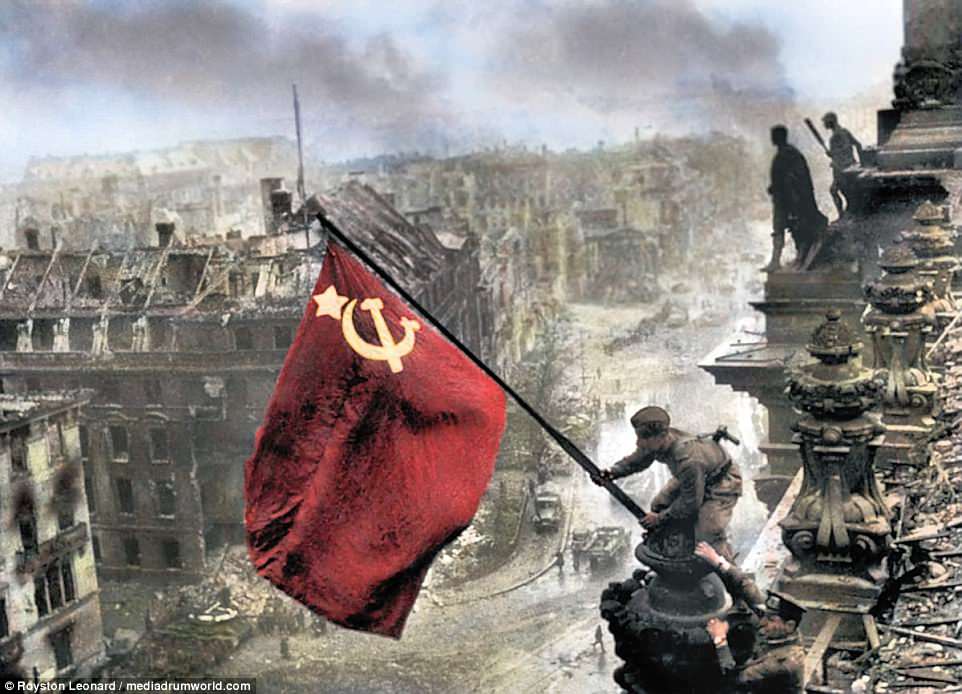 A photo taken on May 2, 1945 in Berlin, Germany and now transformed with colour shows a Soviet soldier raising the Red Flag over the Reichstag, after the Allied forces entered the city 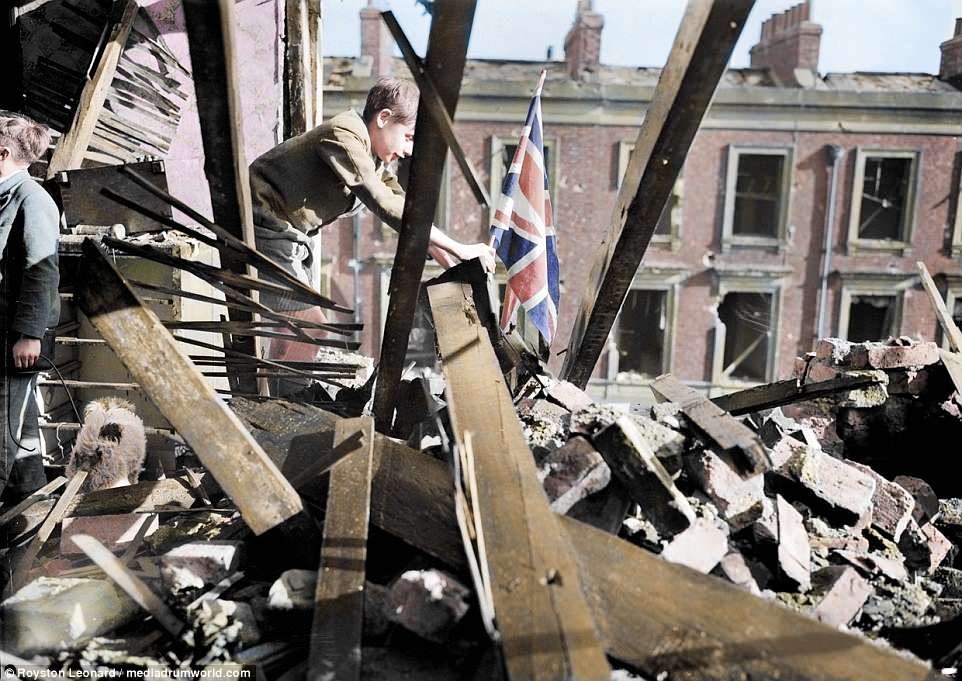 A young boy called Leslie plants a Union Flag into a pile of rubble and debris after his home was destroyed following a Nazi bombing raid on London in 1940. This scene was typical of the defiance showed by Britons in the face of relentless Luftwaffe airstrikes

An unconditional surrender was signed and then approved by the Allied forces on May 7, 1945. All German forces were ordered to cease operations once and for all at 10am the following day.

The German surrender had been anticipated for some days, but when the news was confirmed it created waves of celebrations across Western Europe.

Winston Churchill made a now famous radio broadcast at 3pm on VE Day in which he announced the cease fire. 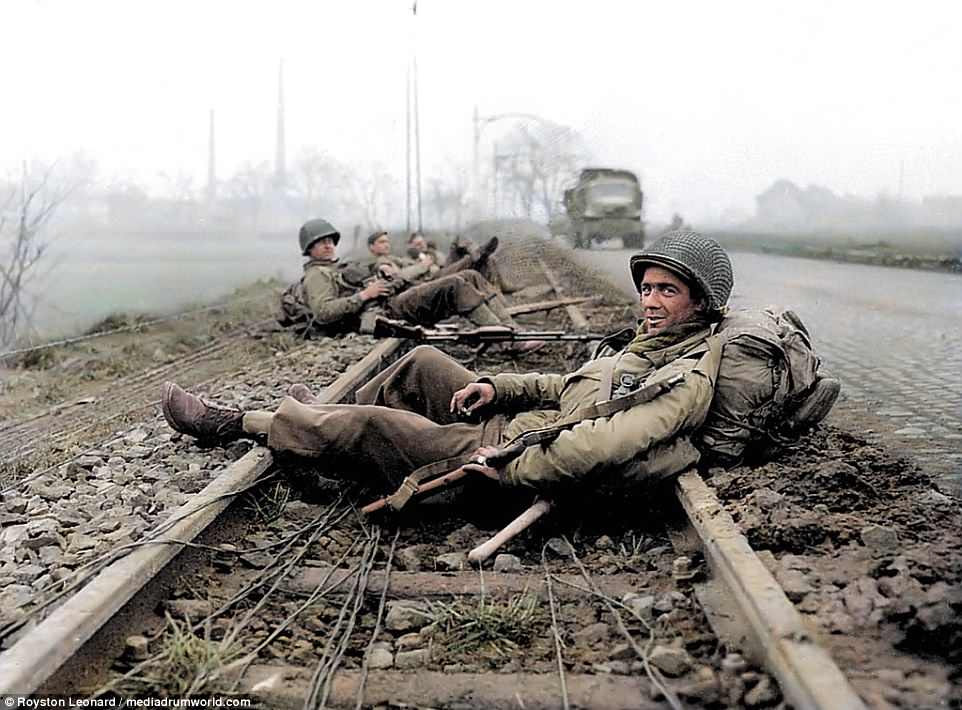 GIs of the 413th Infantry Regiment, 104th Infantry Division ‘Timberwolf Division’ are pictured resting on railway tracks after combat in Düren, town in North Rhine-Westphalia, Germany on December 21, 1944. The photo was captured during the Battle of the Bulge – the last major German offensive campaign on the Western Front during the Second World War 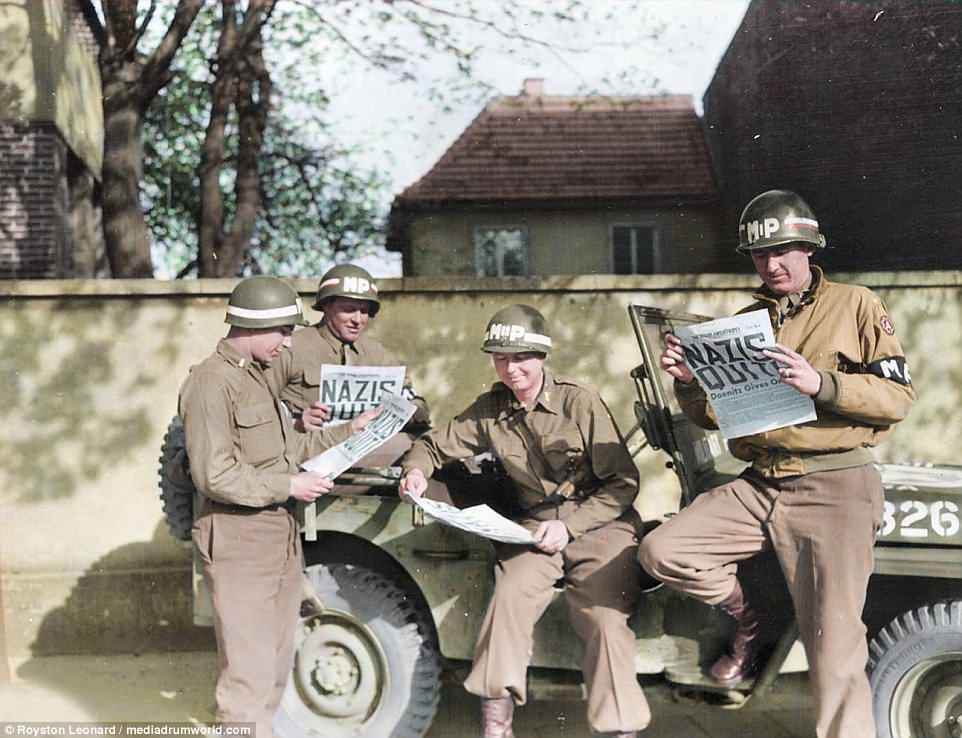 Four members of the military police take a break along a German road to read in the ‘Stars and Stripes’ newspaper about the Nazi surrender in May 1945. The front page carried the headline ‘Nazis quit!’ 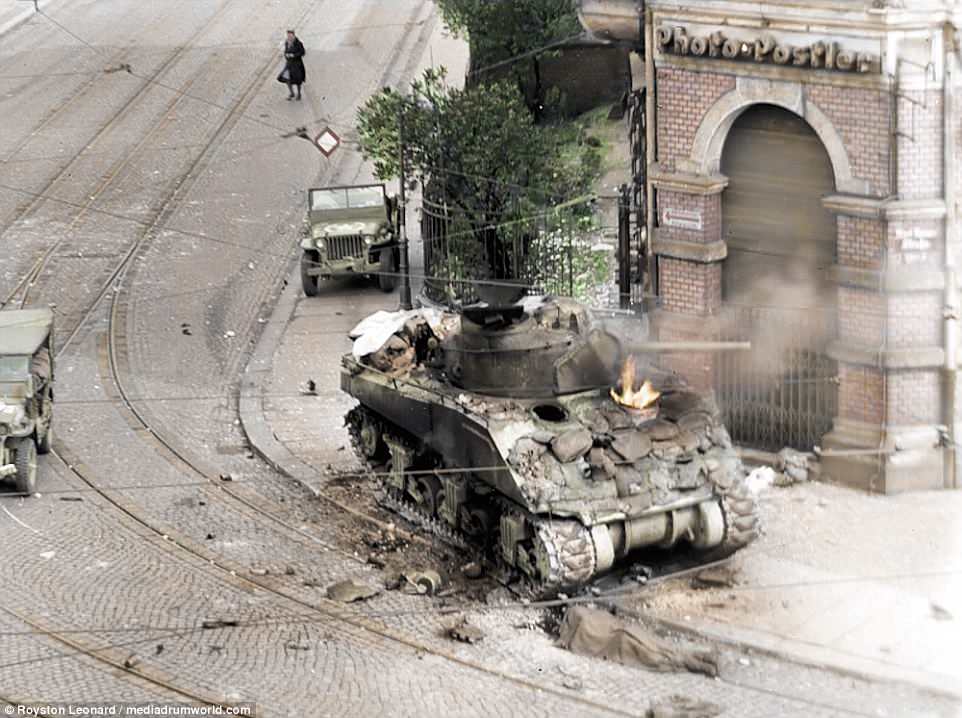 A tank burns at the intersection of Karl Heine street and Zschochersche street in the eastern German city of Leipzig in April 1945. A body is covered by a blanket inches from the tracks of the war machine. Weeks after the picture was taken, Europe  celebrated victory over the Nazis in a wave of euphoria 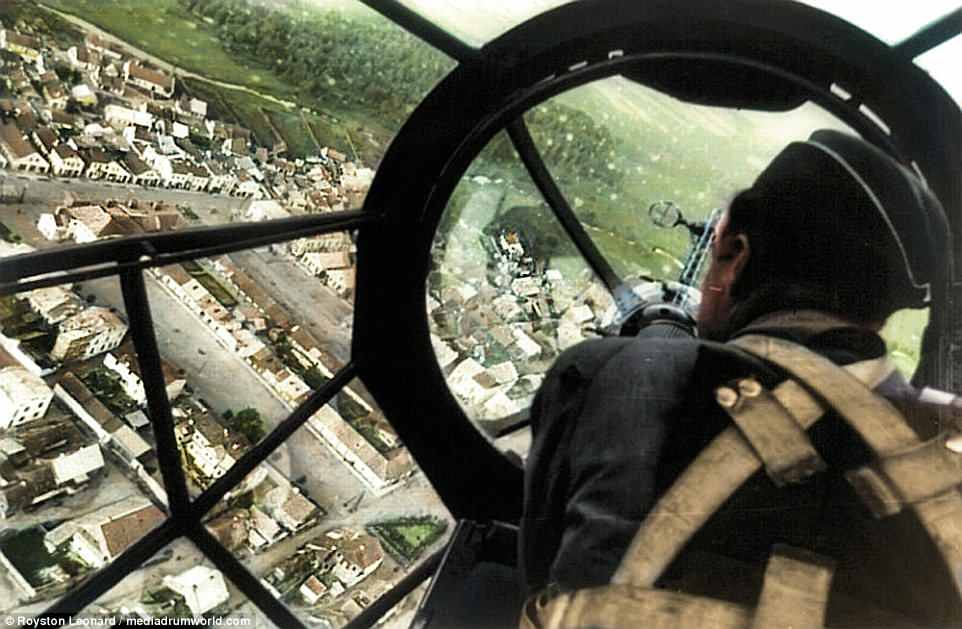 The scenes of jubilation were a far cry from the early days of the Second World War when Nazi Germany made crushing advances across Europe. Pictured is a German Heinkel He 111 on a mission above neighbouring Poland in 1939 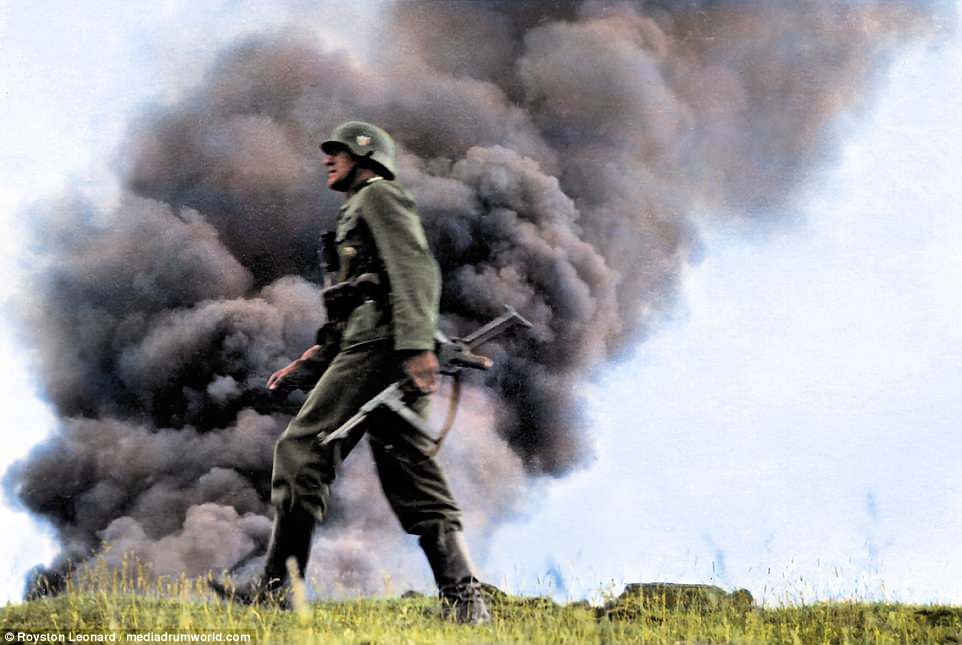 A German officer marches during the failed Nazi invasion of the Soviet Union in 1941. The photos were colourised by electrician Royston Leonard, 55, from Cardiff who spent between three and four hours colourising each picture