What a difference a year makes.

A calm and collected Conrad Hilton appeared in a Los Angeles courtroom on Thursday morning looking put together and polished, telling the judge he is in ‘good’ health as his lawyer successfully petitioned the court to have a pre-trial conference pushed back to June.

He is now due back at the Clara Shortridge Foltz Criminal Justice Center on June 6, where he will be joined by his lawyer Robert Shapiro.

Hilton, who showed up to court in a suit, is facing up to seven years in prison on charges including one felony count of driving or taking a vehicle without consent, two misdemeanor counts of disobeying a domestic relations restraining order and one misdemeanor count of contempt of court.

The 23-year-old brother of socialites Paris and Nicky Hilton has pleaded not guilty to all four counts, which stem from an incident that occurred on May 6 of last year when he stole a car and drove to his ex’s home.

He would later claim that police on the scene had molested him and refuse to leave his jail cell to be arraigned in the case.

Hilton had to be shackled when he did finally appear in court, where for two days he hurled homophobic slurs, mouthed vulgarities and screamed out objections to the statements being made by the prosecution. 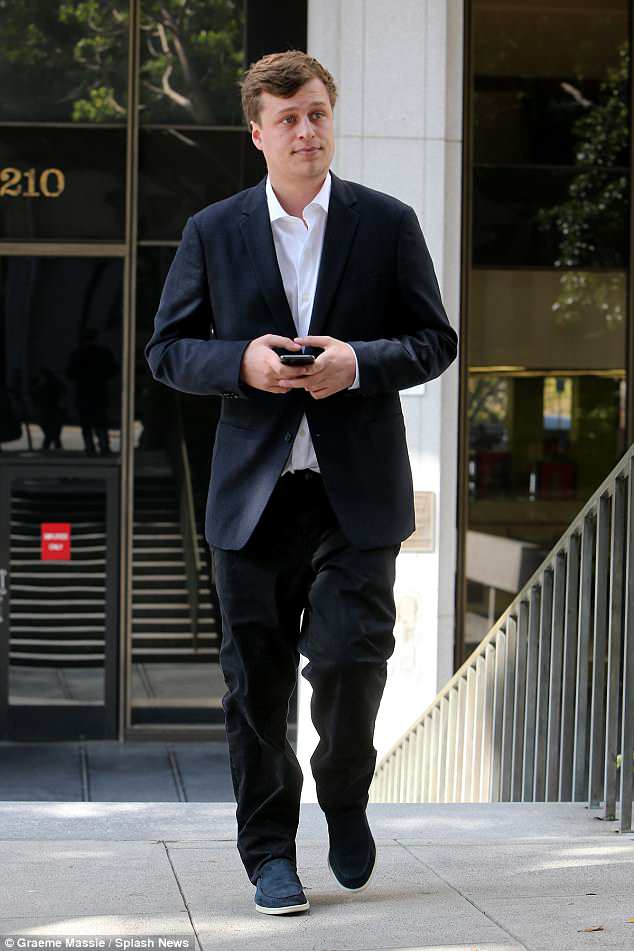 Hilton honors: Conrad Hilton (above on Thursday leaving court) said he was in ‘good’ health during a hearing in Los Angeles on Thursday, where his lawyers asked that his trial be pushed back 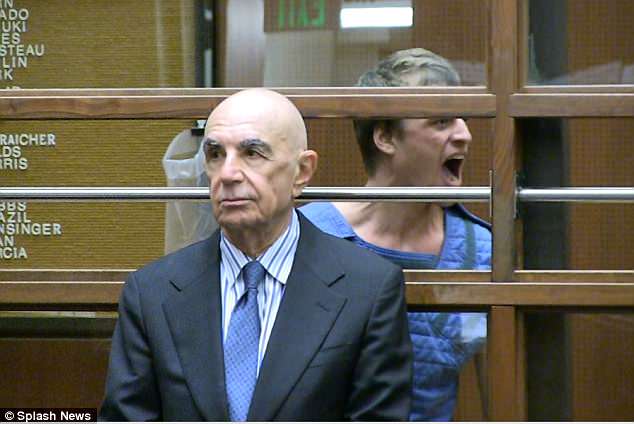 Rage against the machine: It was a far cry from last May, when Hilton appeared in court shackled and chained while screaming slurs and vulgarities during his arraignment (above with Robert Shapiro) Mad max: Hilton, 23, is facing up to seven years in prison on charges related to a May 6 for grand theft auto and violating a restraining order

Hilton was arrested in the early morning hours of May 6 after what police describe as an hours-long crime spree, which began when he and co-defendant William James Bell allegedly decided to steal a Bentley from the home of Rick Salomon.

The two then used the car to drive to the home of Conrad’s ex-girlfriend Hunter Daily Salomon according to police.

Hunter, who had a restraining order against Hilton at the time, is the daughter of Rick, who previously dated and made a sex tape with Conrad’s oldest sister Paris.

The May 6 incident marked the second time that police had been called to the residence to remove Hilton after he appeared on the property.

A previous incident occurred in June 2015, when police were called after Hilton broke into Hunter’s house and threatened to kill himself just one month after she first filed a restraining order.

He was also arrested that year after he allegedly ‘screamed and threatened flight attendants’ yelling profane statements such as ‘I will f**king own anyone on this flight; they are f**king peasants’ on a flight from London to Los Angeles.

That arrest resulted in Hilton checking into a residential treatment program for six months, with a federal judge stating that the hotel scion’s substance abuse and mental health conditions require medication and supervision.

The rehab was mandatory and his probation was extended for another three years, but he managed to avoid serving time in prison.

Hilton was also ordered to check into a treatment facility after his arrest and subsequent courtroom meltdown last May as a condition of his bail.

He also had to post $90,000 bail and remain in he custody of his father, Rick Hilton.

It is not clear how he plans to fight the charges against him when he goes to trial.

Hunter’s mother E.G. Daily called police at around 4am on May 6 of last year claiming that Hilton was trying to get in to the property.

The actress, who is the voice of Tommy Pickles on Rugrats, informed the dispatcher that Hilton was violating a restraining order that the family took out against him in 2015 following his split with her daughter.

She also said he had driven to the property in her ex-husband’s Bentley. 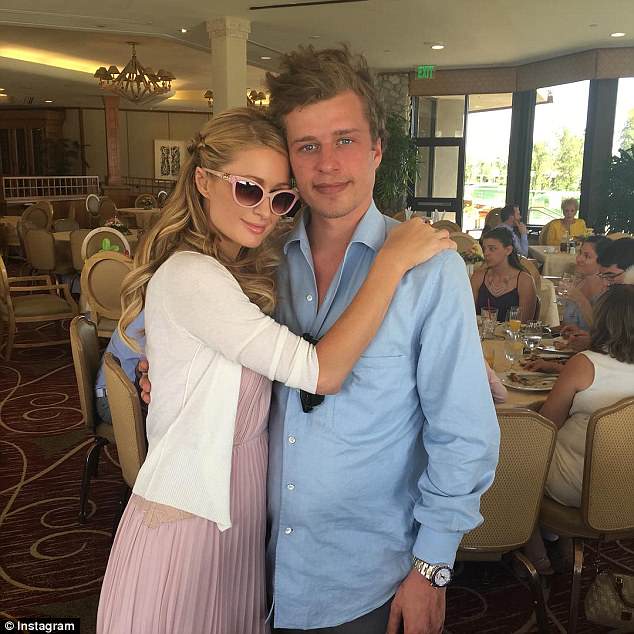 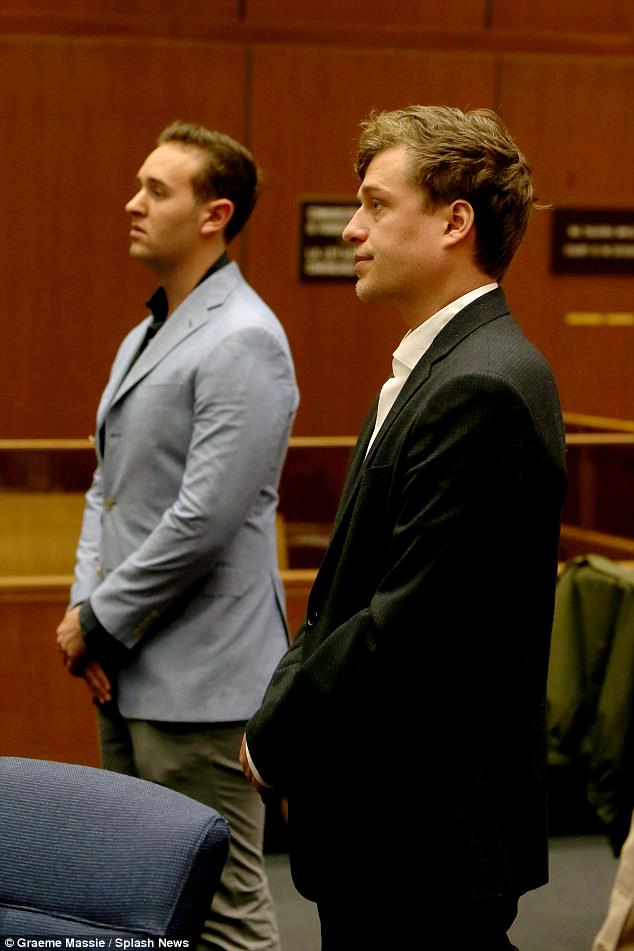 Calm and collected: He was arrested after his ex Hunter Salomon’s mother E.G. Daily called police to report he was trying to break in to their home and had stole her ex’s car (Hilton above with co-defendant William James Bell on Thursday) 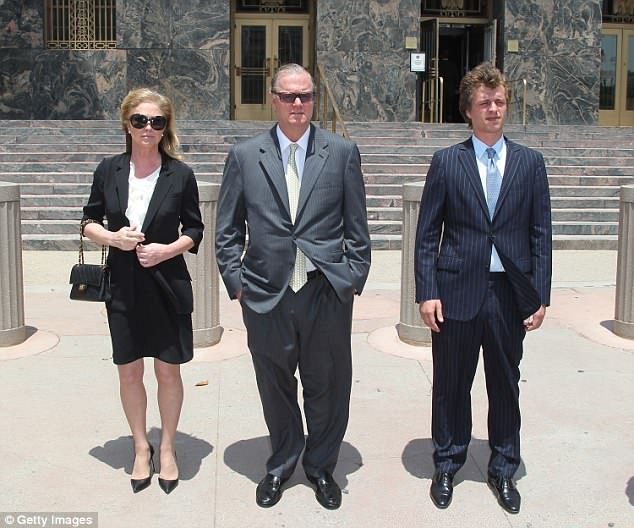 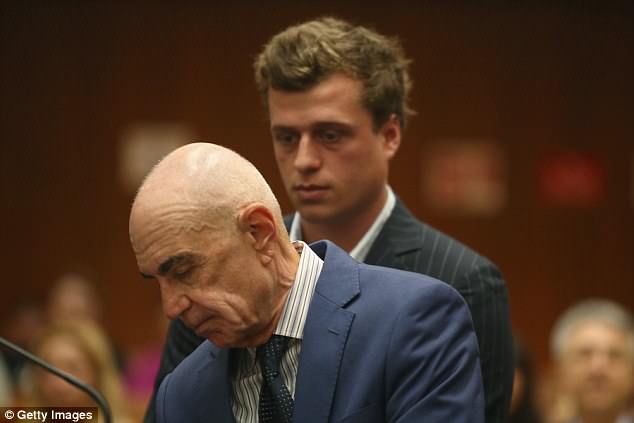 OJ: Hilton has enter a plea of not guilty on all four charges, and checked into a mental health facility last year as a condition of his $90,000 bail (Hilton above in June of last year)

Hilton responded to the arrival of officers on the scene by screaming ‘I’m motherf**king Conrad Hilton and don’t you forget it’ and later accused the officers of touching his penis.

He was booked into the Los Angeles County Jail, where he remained for days while refusing to leave his cell and be bused to court.

When he did finally appear in front of the judge, his behavior was erratic and at times frightening.

In video shot inside the courtroom, Conrad can be seen shaking his head and casting an annoyed gaze when the judge announces he will have to enter the hospital and that his father has been named his court-appointed custodian.

Conrad appeared behind a set of bars for the bail hearing, wearing clothing that is designed to prevent inmates for causing any self-harm.

An amped-up Conrad could be seen making faces and looking around the courtroom during the judge’s instructions, eventually directing his gaze at one photographer and mouthing ‘so f***ing gay.’

He then mouthed more vulgarities to no one in particular and later winked at the videographer who was taping the hearing.

That is when Conrad stated: ‘I will never your honor. I am sorry to the court and the entire state for disrespecting the court. I do not have sex with hookers and I’m sorry.’

In addition to his June 6 hearing, Hilton will also be in court on July 16 for a progress report related to two previous violations of Salomon’s restraining order.