Last November, Texas Gov. Greg Abbott sent a letter to the state’s school board association asking it to remove from districts any materials deemed “pornographic” or “obscene.”

Both descriptors have come up frequently amid an extraordinary uptick in efforts to remove certain books from libraries and classrooms – not only in the Lone Star State but across the United States.

According to a new analysis by PEN America, Abbott’s endeavor – and the logic behind it – is emblematic of “a concerning trend” nationally. Critics are restricting children's access to a host of books on the grounds that they contain too much sexual content. Those same books disproportionately feature LGBTQ+ characters or storylines.

This commonality is evocative of age-old tendencies to conflate sexual or gender nonconformity with sexual obscenity, said Jonathan Friedman of PEN America, a literary and free-speech organization.

That the country is undergoing an unprecedented wave of book-banning is well-documented. The American Library Association counted more than 700 book challenges last year – the most since the organization began tracking such efforts two decades ago.

BOOKS ARE BEING BANNED FROM SCHOOL LIBRARIES: Here's what that does to students. 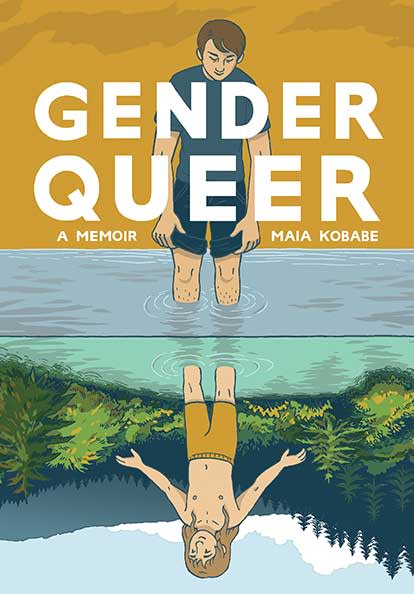 The first to tally and index such efforts, however, PEN America’s analysis shows how pervasive the trend has become. It identified 1,145 unique titles were banned in 86 districts across 26 states over the last nine months – a wave “unparalleled in its frequency, intensity and success."

Roughly one in three of those titles – nearly 400 total – explicitly deal with LGBTQ+ issues. In fact, nearly all of the books at the top of the list, some of them banned in more than a dozen districts, fall into this category.

PEN America defines such bans as any action taken to remove, restrict or diminish access to a book based on its content. The action can be in response to complaints from a parent or community member or to direct or threatened action by government officials including lawmakers.

“It’s not just a backlash – it’s worse than that,” Friedman said. “It’s an attempted erasure of an emerging form of storytelling.”

Maia Kobabe’s graphic novel, "Gender Queer: A Memoir," is the most commonly banned book, according to the PEN America analysis. PEN identified 30 districts that removed the memoir from libraries or curricula over the last nine months.

George M. Johnson’s "All Boys Aren’t Blue," about the author’s experiences growing up as a Black queer boy, ranked second, banned in 21 districts.

Jonathan Evison’s "Lawn Boy," a coming-of-age novel about a gay protagonist, was tied for third on the list with 16 districts banning it. In fifth place, with 11 district bans over the last nine months: Susan Kuklin’s "Beyond Magenta: Transgender Teens Speak Out."

All of them, along with books like Ashley Hope Pérez's "Out of Darkness" that deal with both racism and sexual violence, have faced countless calls for removal. A dominant argument: Their contents are pornographic or obscene. 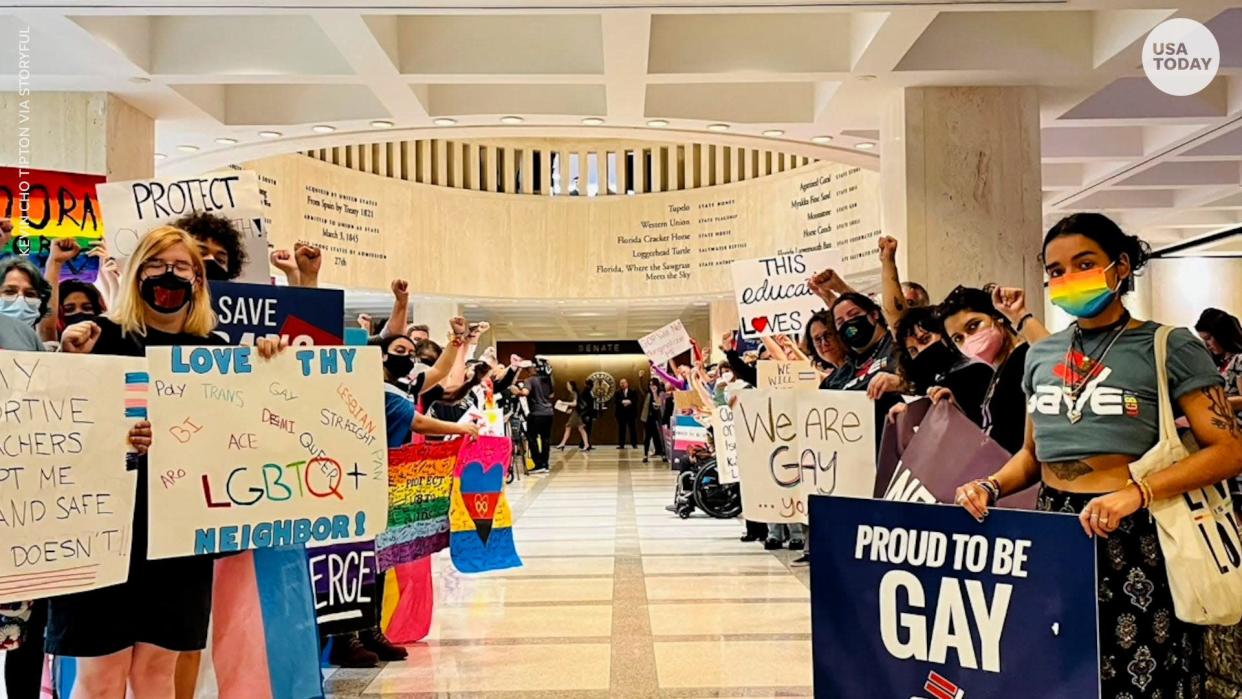 Book banning is 'not about homosexuality or heterosexuality'

Moms for Liberty, which has chapters nationwide and describes itself as a parents-rights organization, has been organizing to get certain titles off school shelves.

“The books that the moms are asking to take out of libraries almost always have obscene content; we’re talking pornographic, explicit material,” said Tiffany Justice, a mother of four and the organization's co-founder.

Yes, queer authors and stories account for many, if not most, of the titles targeted for their sexual content, Justice acknowledged. But that isn’t, she argued, because Moms for Liberty is against LGBTQ+ perspectives – rather, those books are disproportionately likely to include the kind of content considered to be pornographic by the group.

BOOK REVIEW: In an era of book banning, 'Read Dangerously' an impassioned call to do just that

“It’s not about homosexuality or heterosexuality,” she said. “It's about … how much time and energy and thought should be going toward sex” before children enter puberty. (In Justice’s view, some books that are often flagged for their references to sexual violence – Toni Morrison’s "The Bluest Eye," and Khaled Hosseini’s "The Kite Runner," for example – have a place in high school classrooms because of their “literary merit.”)

“These children are being sexualized at younger and younger ages," she said. "If we don't want 10- year-olds having sex, we should probably stop talking to them about it.” Exposing them to the kinds of images contained in "Gender Queer' or the descriptions of sexual activity found in "All Boys Aren't Blue," Justice argued, is "robbing them of their innocence." 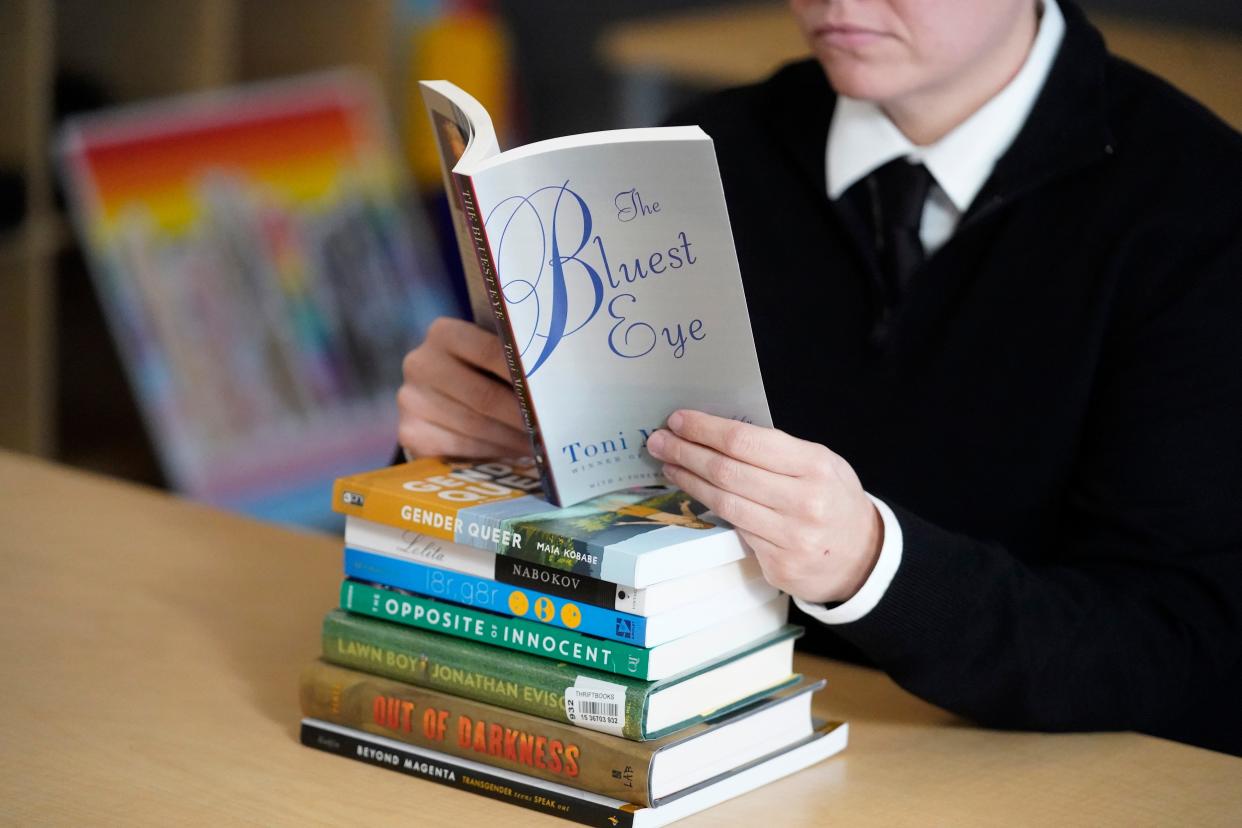 Queer books as sex education 'safely on the page, through characters'

Other observers argue that's little more than a convenient and insidious means of marginalizing queer youth.

Notably, the book-banning wave coincides with legislative efforts to restrict conversations about sexual orientation and gender identity in classrooms. The most high-profile example comes out of Florida, which recently passed what's commonly referred to as the "Don't Say Gay" bill, legislation supported by Moms for Liberty.

A handful of other states, from Arkansas to Montana, have passed similar legislation, while more than a dozen states are considering such bills.

But “in every one of those images, the narrative is all about how the protagonist doesn't enjoy it. It's about gender dysphoria. It's about feelings of marginalization and alienation that are deep and recurring," Friedman said. “The book is about Kobabe’s autobiographical journey to find emself.”

Very young children tend to find things like nudity and intimacy gross. But by the time they’re in grade school, they start becoming curious about body parts and how they work. By middle school, kids start having crushes and thinking about physical relationships. Come high school, and teens’ hormones are in full swing; they’re contemplating, if not acting on, sexual feelings.

Books can help children of all age levels explore sexuality and sexual identity “safely on the page, through characters,” Regan McMahon of Common Sense Media, which reviews the suitability of media and technology for children, wrote in an email to USA TODAY. “Sex is all around teens, in the culture, in the media they watch, the songs they hear, in the activities and sexual identity explorations within their peer group. Reading stories of other teens grappling with sexual issues and situations can help them sort out and reflect on it all.”

It isn't just appropriate for schools to provide access to books that "show lots of different kinds of kids going through different things," she suggested. It can also be incredibly helpful for children who feel like they're unusual. 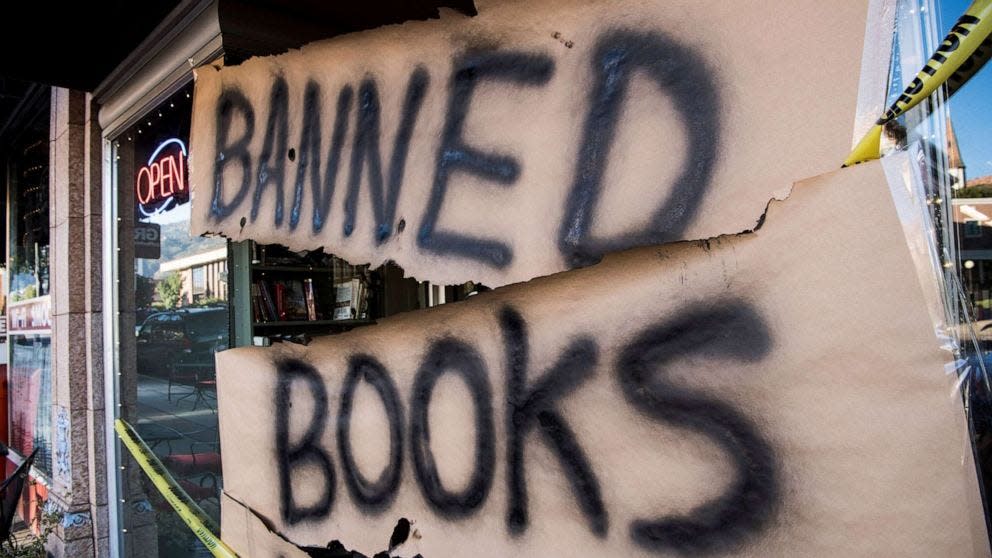 “Taking books with LGBTQ+ characters and storylines off the shelves of the school library isn't going to prevent kids from realizing who they are," she said. "But having them there for kids who will feel seen and understood in those pages can help them feel validated and even valued."

McMahon and others stressed that a sex scene's obscenity is subjective. What some may find vulgar others find raw or cathartic.

Legally, however, the U.S. Supreme Court has set a high bar for obscenity, using what's known as "the Miller Test." One criterion is that the entire book at hand, not a single page or sentence taken in isolation, must be written in the prurient interest (simply put: with the goal of turning readers on).

The Supreme Court ruled in a landmark decision in the 1950s that gay publications could exist without being considered obscene. But it wasn't until relatively recently that such books started to become mainstream.

In many cases, authors whose works tend to frequent banned-books lists wrote those books because they wanted to fill a gap – one they themselves had to confront when they were in school. One such gap: The absence of LGBTQ+-inclusive sex education..

“I don't know that there are books with straight characters that have felt the need to characterize or to story-tell in this way because they're not trying to make up for historic absence," he said.

Queer youth are four times more likely to contemplate or attempt suicide than their peers.

“Many kids find refuge in going to school and being within an inclusive community. But as education on inclusion slips away, the safe haven does too," said Olivia Pituch, a high school student from York County in Pennsylvania who identifies as LGBTQ+, in a recent congressional hearing on book-banning trends. "I have heard slurs being thrown around, LGBTQ+ kids being made fun or verbally abused and more."

York County has drawn national attention for banning scores of books told from LGBTQ+, black and Latinx perspectives; the bans were rescinded following activism by students including Pituch. 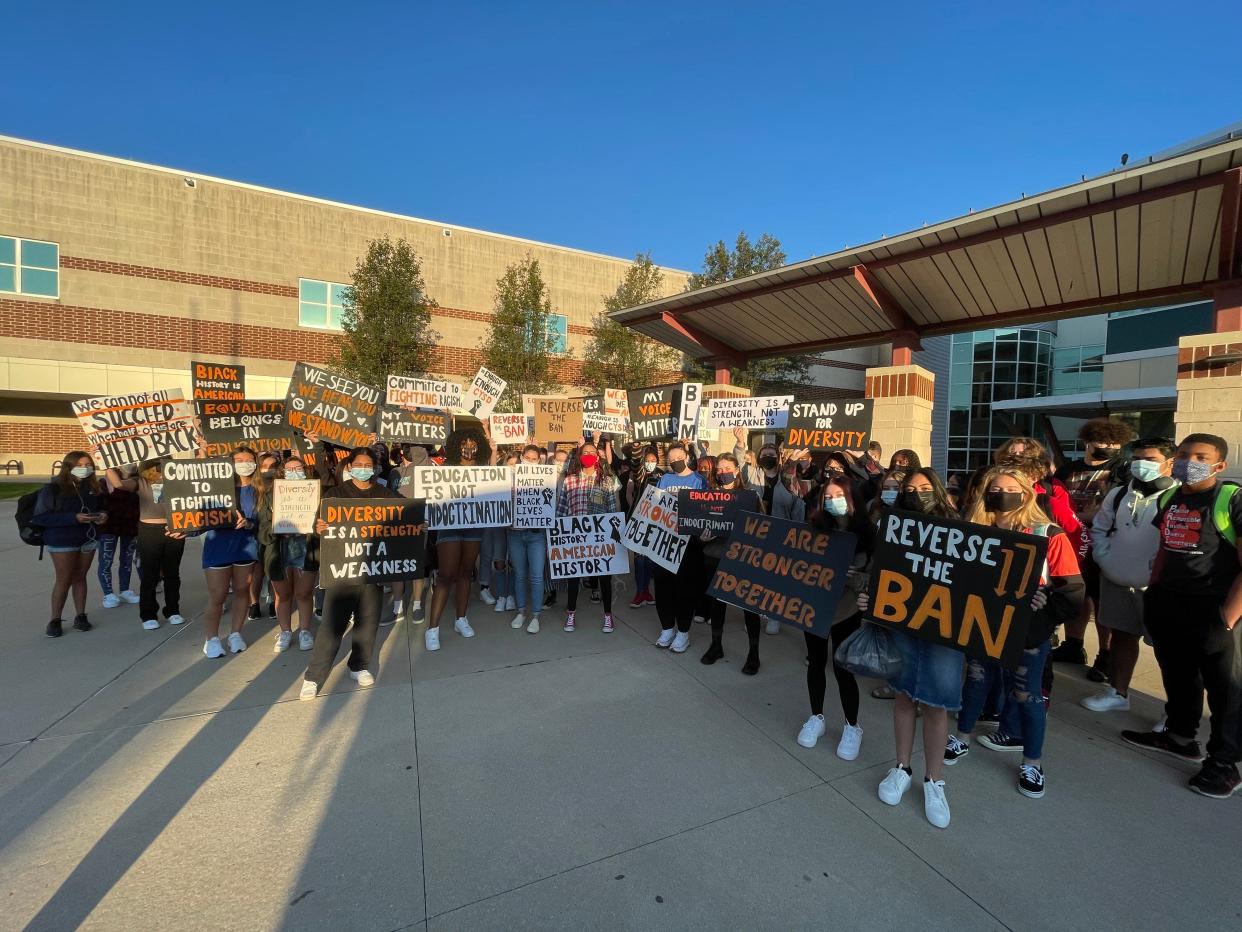 Mandy Zhang, an 11th grader who serves as a youth leader in her Hudson Valley, New York, community, recently launched a petition to have access to "Gender Queer" reinstated in her school district.

In email exchanges, the superintendent, according to Zhang, described the book as pornographic; although a review committee ultimately opted against the memoir’s removal, the superintendent, Zhang said, overrode that conclusion and ordered it off library shelves in mid-March.

“People in the LGBTQ community and minority groups use these books as an outlet and a way to connect with the world, to feel support,” Zhang said. “And by removing these books, it creates a sense of not being accepted or not having the right to be part of these communities

A book with a gender-nonconforming character, she posed, may resonate with someone who has a similar gender identity and is ashamed or confused about it. A book that discusses sexual violence, Zhang said, can help bring comfort and closure to a student who's struggled with similar trauma.

“These books inform students what really happens in the mind and life someone else," Zhang said. "Banning books is banning knowledge, it’s banning opinions, it’s banning our future.”

This article originally appeared on USA TODAY: What is obscenity? Critics are banning LGBTQ+ books from schools.