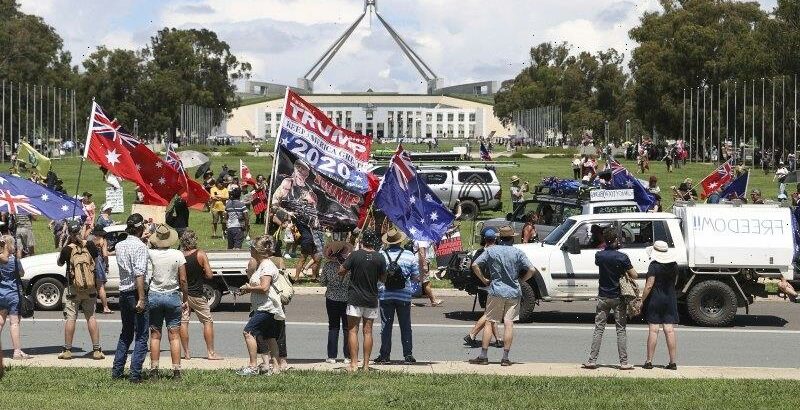 The beneficiary of close to $200,000 raised on GoFundMe for a national protest against vaccine mandates has been arrested in Canberra after police found a loaded rifle and ammunition in his car parked at the protest campground.

Doomsday prepper James Greer, who allegedly goes by Ironbark Thunderbolt, was arrested on Friday after a police search found a loaded modified rifle in his vehicle. It’s expected he will be charged with the possession of an illegal firearm and will also face multiple traffic offences in relation to the roadworthiness of his vehicle. 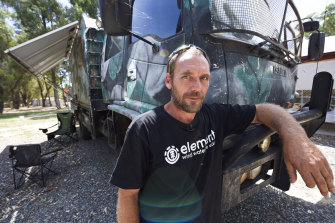 James Greer was arrested on Friday after police found a loaded firearm in his truck. Credit:Marta Pascual Juanola

Greer is one of the leaders of the Convoy to Canberra rally, sparked by a West Australian truck driver, which led thousands of people from various parts of the country, including truck drivers and participants of the so-called freedom rallies and “sovereign citizens” movement, to converge on Parliament House lawn from Monday morning. The protest is expected to come to a head on Saturday morning in front of Old Parliament House.

More than $170,000 raised for a national protest against vaccine mandates that lists Greer as the beneficiary was frozen by major crowd-funding website GoFundMe on Monday pending more information from the organiser on how the money will be spent.

A spokesperson from GoFundMe said “donations are on hold whilst the Trust and Safety review is finalised. We will monitor the situation closely and consider new information as part of this review.”

The convoy had been camping on the Patrick White lawns in front of the National Library for the past week. On Friday morning, more than one hundred members from ACT police and the Australian Federal Police surrounded the lawn to enforce legislation to prohibit illegal camping and parking after a request from the National Capital Authority.

While some protesters decided to leave Canberra after the police presence amplified, many moved peacefully to Canberra’s Showground, ahead of a significant protest planned for Saturday morning that will take place at Old Parliament House.

Former One Nation senator Rodney Culleton and current One Nation candidate Gaye Cameron have been aired as backers of the anti-vaccination mandate protests and encouraged Australians to join the convoy in Canberra on Saturday.

On Wednesday evening, Mr Culleton spoke from his Gold Coast street to encourage members of the anti-vaccine mandate movement to travel to Canberra to protest COVID-19 vaccine mandates on Saturday. 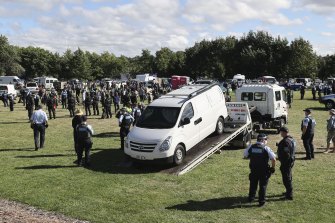 Police enter the makeshift campsite associated with the ‘Convoy to Canberra’ with camping equipment beginning to get removed and cars towed, at the lawns in front of the National Library of Australia in Canberra on Friday 4 February 20222. fedpol Photo: Alex EllinghausenCredit:Alex Ellinghausen

Mr Culleton told The Sydney Morning Herald and The Age he “had no involvement” with the protest and was not in contact with conspiracy theorist Christian “Mack” Marchegiani on Tuesday evening.

But on Wednesday, Mr Culleton said on Facebook live that while he was not involved with the protests directly, he had reached out to Mr Marchegiani. Mr Culleton’s fledgling Great Australian Party is campaigning against vaccine mandates.

“I will not be going to Canberra, I have no right to involve myself in political matters… but I need people to understand that they are the power, the government serves them… I wish you all the best for Saturday, please keep it civil, stay on Commonwealth jurisdiction,” he said.