Jeremy Corbyn today said the government should step aside if it can’t deliver ‘something approaching an intelligent relationship with Europe’.

Speaking in Durham ahead of its Miners’ Gala, the Labour leader says his party is ‘ready’ for a general election and pledged to vote against any Brexit deal that damages jobs, trade, industry or living standards.

He accused Prime Minister Theresa May of failing to clarify her strategy for Britain’s exit from the European Union following her meeting with at Chequers, which she said secured consensus on negotiating strategy. She called the meeting amid division in her cabinet between Eurosceptics banking on a ‘hard’ Brexit and pro-EU Tories favouring a ‘soft’ exit.

When asked whether he and Mrs May could co-operate on a soft Brexit in the wake of the agreement, Mr Corbyn said: ‘She hasn’t closed off any of the other options, because within three days of saying that, she goes to meet Donald Trump and then talks about trade arrangements with the USA.

‘The USA does not want any European standard of regulation on products or workers’ rights and working conditions, they want something very, very different. 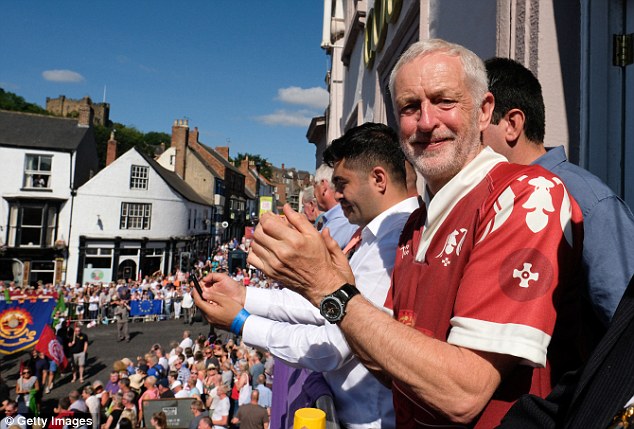 ‘She is not making it very clear what she actually wants at all and the White Paper, I suspect, will unravel as quickly as the Chequers cabinet agreement did.

He branded Trade Secretary Liam Fox ‘frankly embarrassing’ and urged him to ‘grow up’ in lights of comments about anti-Trump protesters during the US President’s UK visit. 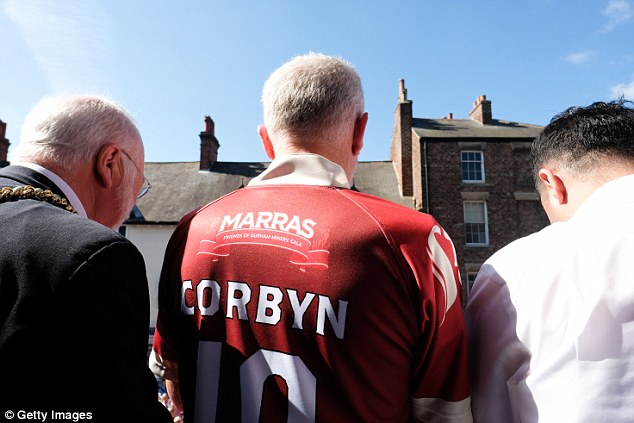 Corbyn’s shirt was emblazoned with the word ‘Marras’, which is a miners’ term for trusted friend popular in the north-east of England

Mr Fox said those involved in the demonstrations were an ’embarrassment to themselves.’

Mr Corbyn said: ‘He lives in a democracy where people have a right to free speech, a right to demonstrate and a right to express themselves.’

The Labour leader was speaking hours before his address at the gala, where he claimed that children should learn about trade union and workers’ rights in schools.

According to organisers, more than 150,000 people were expected to attend the Big Meeting, which features brass bands and pit banners.

Mr Corbyn watched on from the balcony of the County Hotel as a parade took place below him, and he could be heard jokingly telling a supporter: ‘This year there will be a general election.’

In his speech at the Old Racecourse, Mr Corbyn said to supporters: ‘Children should not only learn about trade unions and their rights at work, but should be fully equipped to exercise and develop those rights. ‘Schools need to teach these values and together we can, and will, transform society so it works for the many, not the few.

‘We know that power in society, and in our workplaces, has become concentrated in the hands of a few, at the expense of everybody else.

‘But history shows those at the top have never conceded anything, without it being demanded from people below – things we all enjoy but now take for granted, like weekends and paid holidays.’

During the speech, his wife Laura Alvarez unveiled a football-style T-shirt with the word Marras, a miners’ term for trusted friend that has become part of north-east slang.