Jeremy Corbyn has recruited a strategy adviser who once called for Israel to be condemned in the same way as the Islamic State terror group.

Mark Dearn has joined the Labour leader’s office from a controversial group that campaigns for a boycott of Israeli goods.

The appointment risks reigniting tensions as the party struggles to deal with the anti-Semitism row engulfing it.

For the past three years Mr Dearn, 36, has been a senior campaigns officer at anti-Israel group War on Want, which has been criticised for holding events where speakers have defended violence in the country. Its actions have included organising a sit-in at Waitrose over its stocking of Israeli products.

Earlier this year, Israel banned activists from War on Want – nicknamed ‘War on Israel’ by its critics – from entering the country over its support for the Boycott, Divestment, Sanctions (BDS) campaign, which encourages consumers not to buy Israeli goods and to put pressure on firms to pull money out of the country.

Mr Dearn has tweeted about the boycott, which was branded as ‘bigotry’ by Labour’s shadow foreign secretary Emily Thornberry last year. He has also criticised the United Nations for failing to condemn Israel in the same way as it has rebuked Islamic State.

After then UN deputy secretary-general Jan Eliasson complained in November 2014 about how IS had exploited access to water to suppress communities, Mr Dearn tweeted: ‘No mention of Israel.’ 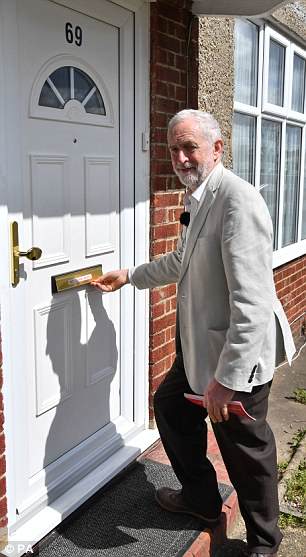 Labour leader Jeremy Corbyn while canvassing in West Drayton, London ahead of the local elections

As well as being a key backer of BDS, War on Want helps fund and organise Israeli Apartheid Week, an event at universities which has been accused of ‘targeting and harassing Jewish students and inviting anti-Semitic speakers to campuses’ – an allegation strongly rejected by the group.

War on Want sponsored an Israeli Apartheid Week meeting in London in February 2016 and paid for the accommodation of one speaker, Steven Salaita, who appeared to defend violence.

The academic attacked Israel’s ‘tenuous colonial existence’ and told the gathering: ‘If we are going to reduce a project of ethnic cleansing, illegal settlement and military occupation to the minuscule chance that a soldier or a settler will be harmed by an act of resistance by the natives, then we forfeit all right to be taken seriously.’

Another speaker said British government policy was fuelled by ‘Zionist and neocon lobbies’. In February 2016, Alex Chalmers resigned as co-chairman of the Oxford University Labour Club after it decided to endorse Israel Apartheid Week.

The prime minister of Belgium has admonished one of his country’s top universities for honouring Left-wing filmmaker Ken Loach while he is embroiled in Labour’s anti-Semitism scandal.

Charles Michel said the Free University of Brussels should not have awarded an honorary doctorate to Jeremy Corbyn’s ally after Mr Loach said Labour MPs who demonstrated against anti-Semitism should be kicked out of the party.

Mr Michel, 42, said: ‘No accommodation with anti-Semitism can be tolerated.’

He condemned it as ‘a movement with a history of targeting and harassing Jewish students and inviting anti-Semitic speakers to campuses’. Last November, Miss Thornberry branded boycotts of Israeli products or academics as ‘bigotry’.

At a Labour Friends of Israel meeting, she attacked those who ‘somehow believe that opposition to the policies of an individual government can ever justify a hatred of the nation and its people, or a boycott of its products, its culture or its academics, or a denial of its right to defend itself from military assault and terror attacks’.

Mr Dearn worked for a newspaper in Kent before getting a job as a London-based foreign correspondent for a Japanese broadsheet. He then studied politics at the School of Oriental and African Studies.